Welcome to our Aperture Desk Job Controller Guide. This guide will show you which controllers will support the game.

Click to read which controllers will support the game.

This game has full support for the Steam Controller. At one point, you need to touch the right “thumbstick” to use Gyro controls, just use your right touchpad instead (which acts like a thumbstick in this case).

The sequence that requires Gyro controls won’t work though, so you just need to use your regular Right Stick to play that one out.

Similar to the regular Xbox Controller, this game has “almost” full support for the Elite Controllers. The paddle sequence works just fine, but the gyro sequence, again, does not.

Once again, this game has “almost” full support for the controller. You can’t play out the Gyro or the Paddle sequences as expected, but alternate controls are provided.

This game has full support for both the PlayStation 4 and the PlayStation 5 controllers. The Gyro sequence works, (controls mapped differently), and the paddle sequence can be completed by mashing L1+L2 or R1+R2 for the Left and Right paddles respectively.

Aperture Desk Job brings a new breath to the walking simulator genre, which has been made many times. Sitting behind a desk, you will experience an endorphin-filled world where lightning strikes.

You are a new entry-level employee and today is your first day. Your heart is hope, your feet are full of dreams, and you are determined to climb the corporate ladder. But life has different plans for you and these plans include chairs.

Desk Job, a free-to-play game for Valve’s Steam Deck, is designed to teach you the controls and features of the Steam Deck in a way that’s more engaging than it sounds.

Keep your expectations low: This is not a Portal sequel. You can raise your expectations a bit now because this game takes place in the expanded universe that those games belong to. Desk Job puts you in the driver’s seat of Aperture Science. Then he removes the sliding part completely and adds a table in front of a chair.

Steam Deck: A Desk for Your Hands

So far you have mostly sat in real life. Video games were also virtual fantasy worlds from which you could escape. With the Portable Steam Deck, we’ve completely changed that. Now you’ll be able to run marathons and jump out of planes while keeping your brain and hands busy with the things you used to do. 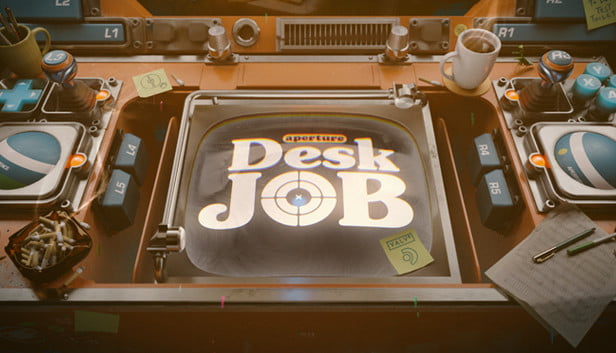