Welcome to our Jurassic World Evolution 2 Dinosaurs Skins & Pattern Colours guide. Images of dino skins/patterns with their gene names underneath, to help you mix and match without the guesswork. Currently only few species, will gradually add more if it remains necessary.

Find out what it takes to become a park management expert in Campaign Mode, a gripping and original narrative that puts you at the center of all the action after the world-shaking events of Jurassic World: Fallen Kingdom. Dr. in the movies Team up with iconic characters like Ian Malcolm (voiced in English by Jeff Goldblum) and Claire Dearing (voiced in English by Bryce Dallas Howard) and lead efforts to control, protect and contain wild dinosaurs that are already causing chaos in the United States.

Build Your Own Jurassic World

Take control with more detailed management tools and creative options. Build a range of customizable new buildings and hire new scientists. Shape your park to meet the needs of both your guests and the dinosaurs. Unleash your creativity in Sandbox mode or test your skills in dealing with different locations and environmental disasters in Challenge mode.

Play the highlights of your favorite movies in an extraordinary way. Experience ‘what if’ scenarios from the iconic Jurassic World and Jurassic Park movies, where each level takes place in their era and location in the five movies. Dive into the Jurassic World series and experience how events unfold once you take control.

More than 75 prehistoric species come to life in Jurassic World Evolution 2, including the much-requested flying and swimming reptiles. Now these animals feel more alive than ever as they reign outside, fight for dominance, and engage intelligently with the world that surrounds them. Customize dinosaurs with brand new colors using bioengineering and modify their genomes to unlock their attributes. 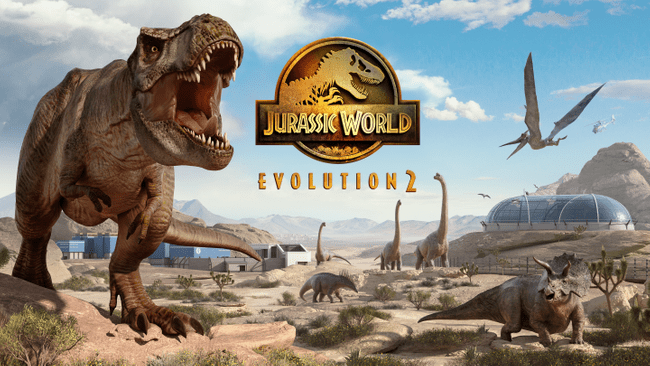