1. Kill the left statue (blood statue) first. Avoid the blood pool. You have always one round to move away (it will always be cast in a way that you can move out of it before it appears). Kill the undead enemies when needed, else focus on destroying the first statue.

2. Kill the right statue. No special attention needed. Kill undead enemies when close, else focus on the statue

Try to stay in a way that the boss will hit a wall with it’s rush: 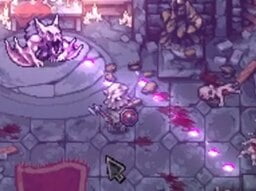 Rush to get stunned for 2 rounds.

After the stun he will most likely melee you once and then cast a spell. Avoid this attack: 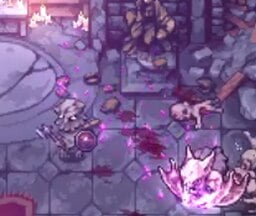 This spell covers some space in front of him, but you can always avoid it if you don’t stay in front of a wall (so you need to have free space in all directions when he casts it so you can step out of it). Now you just have to worry about his melee attacks. You can try to hit him once when he is stunned and move away from him. I haven’t tried it because I was able to tank the damage, but if you can’t try it. It might be possible to kill him without getting hit by him once, but as I said – I didn’t try it yet.