Welcome to our Barotrauma PVP Guide. Read only first 2 sections for absolute minimum minimum required knowledge. We know that there are people who have a hard time finishing the Barotrauma game. If you are one of those who find it difficult to finish the game, let’s take you to our Barotrauma guide.

1. Don’t reload with drag and drop. If you have empty smg in slot 1, and full magazine in slot 2, press 2 on keyboard to reload without your firing stopping.
2. Stun lock is strong. Smg, shotgun, dual revolvers, and any more powerful weapons will stun lock a normal person.
3. 3 successful hits with stun rod will stun someone for 10s. 2 successful hits if the stun rod has fulgarium battery. Duel wield to stun even faster. Higher quality stun rods may stun with less hits.
4. thrown grenades can travel from within the hull to outside, but they cannot travel from outside the hull to within.
5. doors and walls shield you from explosions.
6. as of last update, dual revolvers are one of the best weapons. They have high dps, stunlocking, and accurate. Many of the pvp subs around have not adjusted to the dual revolver buff, and leaves revolvers and revolver ammo around. Use them while you can.

1. Rebind health menu to somewhere convenient (like Q).
2. Have a dedicated slot for each of the main 3 types of meds (opiates, anti-bleeding, anti-bloodloss) and have those slots rebinded to somewhere convenient (like Z,X,C) so they can be spammed.
3. Morphine and saline heal over time (10-20s); Use them right before fighting to save time.
4. Methamphetamine and hyperzine decrease stun per second for 30s. Take multiple to decrease more stun per second. Combat stimulant gives stun resist. Use any of these pre-fight to avoid stun lock.
5. steroids and hyperzine give damage resist. Use them pre-fight.

1. oxygenite tanks gives speed boost if breathed.
2. fire extinguishers are faster than scooters but must use hands to carry. Use fire extinguishers for travel and scooters for fights.
3. enemy turrets can be unwired with screwdriver. stun resist meds can help if the turret is manned and shooting at you.
4. enemies can see your headlights on walls. Aim with an aimable item to point headlights away from walls with enemies potentially behind them to not give away your presence.

1. stabilozine alleviates every poison except paralysis, but multiple is required to cure advanced stages of poisoning.
2. sufforin, morbusine, cyanide all kill slow. Also, injecting someone with more than 1 dose of any of these will not kill faster.
3. hand injecting 3-4 radiotoxin will kill very fast, syringe gunning 5-7 radiotoxin will kill at about the same speed as the 3-4 hand injection. cure with antirad / multiple stabilozine
4. spam injecting opiates will kill very fast, cure with naloxone / multiple stabilozine

Mostly reminders to use common sense and contribute to your team’s shared store of information. Teammates can’t see what you see so you must say what you see.

1. please know your clock directions. Compared to just “top/bottom” + “left/right”, the extra definition of the clock system enables the captain to communicate enemy locations beyond periscope viewing range. Gunner would be able to shoot before they see.
2. Call out enemy boarding attempts.
3. Call out enemy sub spottings (use clock system).
3. Call out reactor overloads.
4. Call out injured/unconscious teammates and where if they themselves or you have no meds.
5. If a text chat teammate’s text message was obviously not read by all too busy teammates, repeat their text message in voice chat to help disseminate the message.

From this point on, it won’t be minimum knowledge for pvp. Assume you are at least a knowledgeable wiki reader.

The projectiles of turrets spawn at variable distance from the shaft depending on the turret. This affects the level of danger of attempting to unwire the turret while it is manned and shooting.

Where a grenade explodes will depend on your body’s orientation when throwing, and the angle thrown. Each type of grenade will sail through the water in the same arcs, and explodes after 3 full seconds. Grenade projectiles comes from the raised hand holding the grenade.

— if the origin is at the raised hand holding the grenade, the arcs (in water) will look like this: 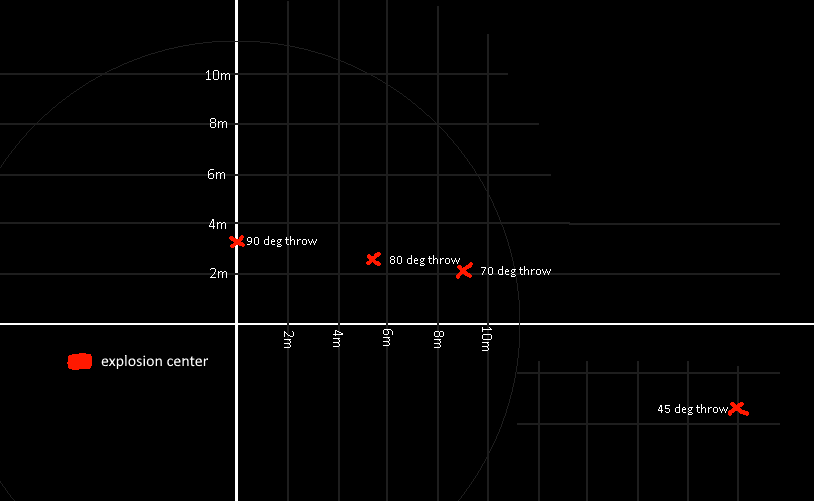 Note that it is important to remember that grenade arcs and grenade projectiles come from the raised hand. since the body is about 1.6 meters long, and a body with raised hand is about 2 meters long, you should be conscious of where your body and hand is. It could mean the difference between being in the explosion radius and not:

body oriented vertical with head up and feet down, and grenade is thrown straight up (body actual size): 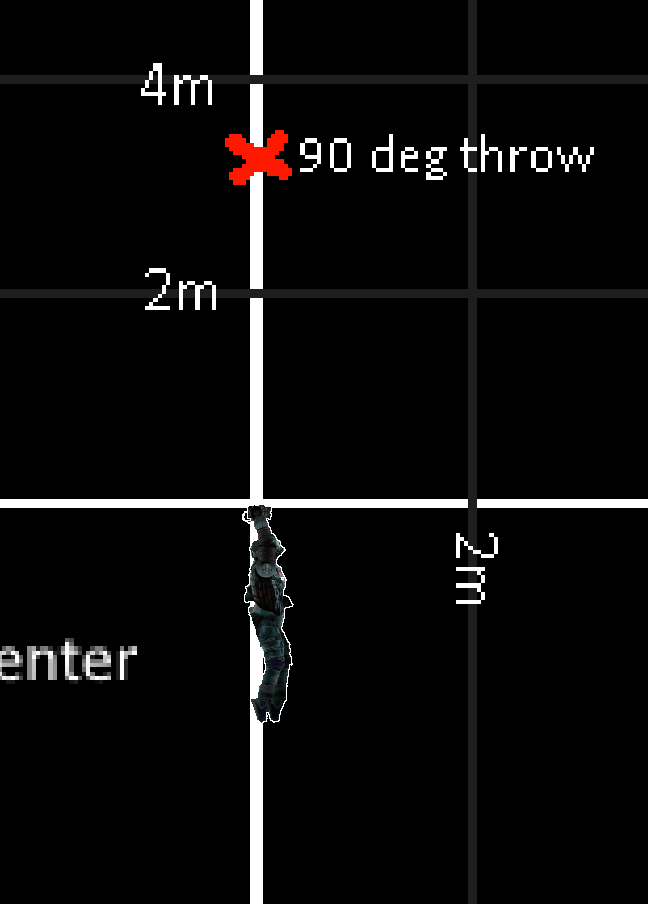 body oriented vertical with head down and feet up, and grenade is thrown straight up (notice you will be much closer to the explosion): 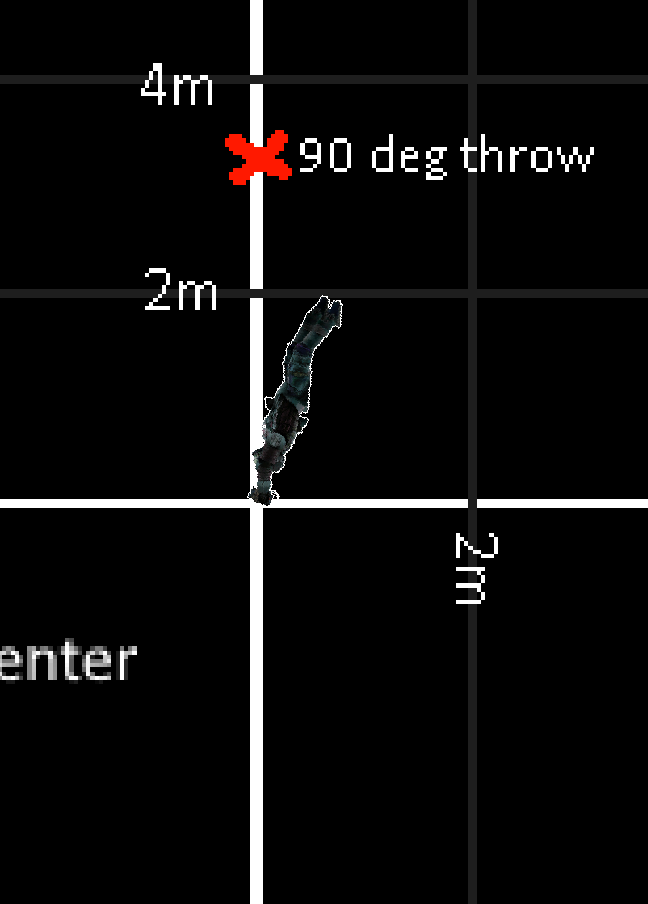 Grenades arcs will never end more than about 3.2 meters above your raised hand (the 90 deg throw), and for this reason, grenades are most useful for someone with the higher ground. Grenade arcs also can be hard to manipulate to end below you in a useful spot. The arcs are most useful when there is open space above to allow for arc movement, and submarine shells around to limit the number of possibilities an enemy has to get to you. This generally constitute fights right along submarine tops. Arcs thrown into unlit water are practically impossible to see for an enemy.

Grenades in general are most useful in two ways. 1. you know where the enemy will be in 3 seconds, and you can get a grenade there (prediction). or 2. you want the enemy to move away from somewhere, usually into another position that is also disadvantageous to him (zoning).

Prediction can be easy when the enemy has few choices as to where they can move. In chases, the enemy wants to get to you by the shortest path. You can put a grenade right in this path. If he is already quite close to you, you can arc a grenade near yourself but even nearer to him. If you arc it so that he is closer to the explosion center, you win the trade.

The profound thing is, even though explosions deal weakened damage through doors and walls against humans and walls, the effect of explosions to deteriorate volatile explosives’ condition is not blocked at all by doors or walls. Each explosion will still take off 50% condition regardless.

This fact can be leveraged to create some of the most overpowered and uncounterable traps and attacks in the game:

Generally, you want to “prime” the VE using 1 explosion on it beforehand, so it will only take 1 more explosion to trigger it. You can keep the VE in a toolbelt until you need it, so you won’t explode from stray and untimely explosions.

1. Security guards and medical doctors have 110 default max vitality, while the other classes have 100.
2. Stun darts normally stun 10s after a 10s delay. However, if you are security officer or medical doctor, stun darts will only stun you for 1 second. This is because after the progressive stun from the stun dart reaches 100, it only applies 90.9 incremental stun to a character with 110 vitality, as according to the application equation of the application section of https://barotraumagame.com/wiki/Afflictions. 90.9 incremental stun will apply stuns for only 1 second.
Since stun batons also add incremental stun, it is possible to stun a security officer or medical doctor for full 10s with the 90.9 incremental stun from a stun dart + 1 more baton hit. By the way, this is also why characters with extra large amounts of vitality (from talents or something else) won’t even be stunned by stun darts, and why characters with large amounts of vitality take more than 3 hits from normal quality battery cell stun rods to stun, and why those characters won’t go down from just 1 dose of chloral hydrate.
3. when you shoot someone, their aim is thrown off for a fraction of a second. The slight stun from a bullet also makes it hard to rotate their body for a very slight time. In the situation of a 1v1 gunfight in the water, if you are using an smg, which mildly stunlocks, and you are shooting from behind them, they will find it very hard to rotate their body and aim at you. This strategy of shooting while swimming behind someone works for most weapons.
4. Run away from enemy shotguns. Shotguns at close range will stunlock hard. At long range they are useless. You can gun them down with almost anything by keeping a safe distance. If an enemy shotgun did catch you in his vicinity, scooter/swim away immediately to a safe distance. The scootering away will streamline your body making fewer of his shotgun pellets hit you. If you stay, you’re likely to be stunlocked and killed.
5. piercing coilgun ammo pierces walls.
6. Since most subs can’t slow down very fast, it is possible to predict the path of an enemy sub, and drop a depth charge to collide with that path at the right timing, and the momentum of the enemy sub will make it impossible to dodge your depth charge.

Pvp experience will depend very much on the server’s style, subs, and the items available on those subs.

1. Most common situation: they will give you the smg ammo to stun lock someone for 30 seconds, and the morphine to survive it. Whoever can spam meds the fastest or stun lock the first wins.
2. Subs with fabricators and materials to craft nuclear ammo or exploding ammo. Mostly whoever gets good shot first sweeps enemy team.
3. Subs with railguns and explosives. You need to hide from the railgun. Fabricate explosives if you can manage the crafting time and materials. Mostly whoever gets good shot first sweeps enemy team.
4. Subs with medals. Extremely overpowered. For security officer Enforcer, Beat cop, Stone wall, Implacable very OP. Electrochemist for engineer is good. Clowns tank. For captain, Inspire to battle and commander. Generally Security officer sweeps.
5. Subs with uncommon contraptions. Experience variable. Learn how they work.
6. Servers with balanced amount of medicine, and ammo, no instakill weapons, and no one dominant repeated strategy.