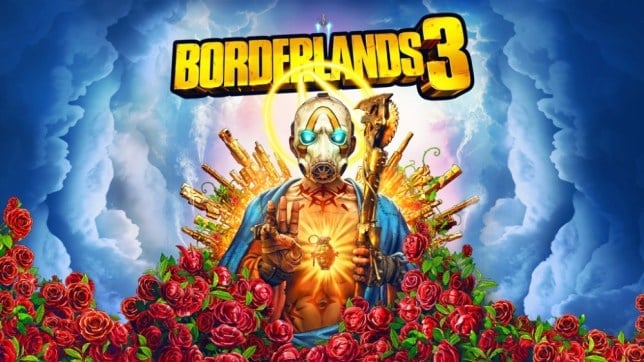 With her active skill, Moze the Gunner summons a powerful mech, Iron Bear. Each of her skill trees include different types of weapons you can add to Iron Bear, ranging from flamethrowers and rocket launchers to a force field and rail gun. You can even add another seat for a companion to climb into and shoot from.

Because Iron Bear has legs, Moze is far more mobile than previous gunner-type classes, who had to cater their strategies around stationary turrets. This may come as little surprise, but Moze’s skills make her the tank of Borderlands 3’s Vault Hunters. If you like shrugging off damage and demolishing foes with giant explosive attacks, then Moze is the character for you. She also seems to be the youngest of the four Vault Hunters, sounding off with repeated pop culture references and making silly jokes while crushing foes beneath Iron Bear’s massive paws.

Moze’s action skill is tied to Iron Bear, a tank-like mech she summons into battle. Iron Bear can equip two primary weapons and several secondary pieces of tech, allowing you to change the type of weapon you summon. The mech uses fuel whenever it moves or fires a gun, and you’re ejected from it once your fuel source is gone. Despite this limitation, Iron Bear is still ridiculously powerful.

Each of Moze’s skill trees attaches different weapons to Iron Bear. You can specialize in just one tree and customize Iron Bear to fit into one of the three established playstyles. However, you can also pick and choose weapons and perks from each tree to create an Iron Bear that’s wholly unique for you.

Moze’s first skill tree is called Demolition Woman. This tree is all about doing splash damage, providing the option of arming one of Iron Bear’s arms with a missile launcher and the other with a grenade launcher. Almost every perk in Demolition Woman increases the size and damage output of explosions, both done by Moze and Iron Bear. The remaining perks in the tree increase the longevity that Moze can stay alive–prolonging the time she has in Fight For Your Life and increasing the fuel capacity for Iron Bear. There’s also a perk that allows Iron Bear to act on its own as a sentry turret.

Shield of Retribution is Moze’s risk vs. reward skill tree. In this tree, you can find a high-powered railgun for Iron Bear and the Iron Fist attachment, which allows Iron Bear to punch forward and smash enemies into pulp. There’s also a secondary weapon attachment in this tree, a projected forcefield shield that protects Iron Bear. A lot of the perks in this tree increase Moze’s attack damage if either she or Iron Bear is close to death. To counter this, there are some perks in place for increasing the two’s overall shield strength and recharge rate so they can still survive when their health is low.

Moze’s final skill tree, Bottomless Mags, is all about doing as much damage as quickly as possible. In this skill tree, the two primary weapons for Iron Bear are a chaingun and flamethrower. If a chaingun isn’t enough bullets for you, one of the perks in this tree attaches another machine gun to Iron Bear’s back. The rest of the perks increase the damage that Moze can do on her own, allowing her to shoot while sprinting and temporarily gain infinite ammo while exiting Iron Bear.

It wouldn’t be a new Borderlands game without the presence of the Sirens, a group of mysterious women with incredible powers who are distinguishable by the tattoos that adorn half their bodies. Amara is one of the new Sirens introduced in Borderlands 3; though, it’s unclear how long she has existed in the Borderlands universe or where she comes from.

Unlike the mid-range support specialists Lilith and Maya, Amara is a close-range powerhouse with melee-focused skills. If you enjoyed playing as Kreig in Borderlands 2, chances are you’ll also like Amara. Just instead of swinging an ax around, though, you’ll crush enemies with ethereal arms, swat bandits on their butts with psychic powers, and transform into a spider-like Siren creature that shoots concentrated elemental energy. Amara can also change the elemental damage her active skill and melee attacks do at any time, making her one of the best characters to have on hand for dealing with shielded and armored targets. With the added emphasis on Sirens in Borderlands 3’s campaign, Amara has plenty of interesting things to say about the events in the game’s story.

She can dish out damage in a variety of ways, and can even hold enemies in place and do crowd control like Borderlands 2’s Maya. However, there’s never been a Siren like Amara, who’s skill trees allow her to excel at all distances. After getting the chance to play as her during a Borderlands 3’s gameplay reveal event, we’re convinced she’s one of the strongest Sirens around.

Amara has a ton of different skills in her repertoire, which are spread across three unique skill trees: Brawl, Fist of Elements, and Mystical Assault. The Brawl tree is mostly for close-quarter combat, as well as causing elemental damage on melee attacks, performing AoE attacks, or triggering Nova explosions when she’s attacked. The Fist of Elements and Mystical Assault trees, however, are more geared towards crowd-control and long-range combat respectively.

FL4K is essentially the hunter class of Borderlands 3. Like the other Vault Hunters, they have three distinct skill trees and active skills to choose from. However, FL4K also has three different pets they can switch between at any time, giving them a companion that constantly assists in battle.

For this reason, FL4K is the best character for those who want to play through Borderlands 3 on their own. Though any of the four Vault Hunters can succeed on their own, FL4K has the added benefit of never actually being alone–they can even train his pets to pick him up in battle. Whether you play with a group or not, FL4K is ideal for those who enjoy long-range pistols, assault rifles, and snipers as they have a lot of perks that increase attack power when landing critical shots or attacking enemies from a long-distance. FL4K is also a bit of a flirt and enjoys insulting others with humor, so if you enjoy listening to a sassy AI talk down to their allies and constantly refer to the hunt–both in battle and in love–then go with FL4K.

If you’re a fan of Borderlands 2’s Zer0, then Zane is likely the Vault Hunter you’ll want to choose in Borderlands 3. We’re not just saying that because both their names start with a “Z” and they were classmates at the same school, but because of Zane utilizes a holographic decoy device–just like Zer0–to aggro enemies away from him.

But to say Zane is a straight copy of Zer0 would be a great disservice to this fascinating character. Zane has the ability to sacrifice his use of grenades to equip two of his three active skills at once. As a result, you’re able to mix and match his assortment of abilities to create decoys, summon a drone, and put up a force field to constantly confuse enemies and attack them from all sides. Zane is one of the oldest characters we’ve seen in the Borderlands franchise, and thus has more to say about the history of the planets you visit.

Zane is Borderlands 3’s deceptive trickster with a wealth of fancy gadgets at his disposal.

Zane has a ton of different skills in his arsenal, which are spread across three unique skill trees: Double Agent, Hitman, and Undercover. Hitman gives him the SNTNL, an automated drone that hunts down targets. Most of the skills in this tree allow Zane to increase his movement speed and damage output, allowing him to use the drone in a supportive capacity. On the other hand, Undercover grants him Barrier, a force field that stops enemy bullets. The skills in this tree increase Zane’s survivability, allowing him to regenerate health and use his active skills more often. Finally, “Double Agent” lets Zane summon a Digi-Clone, which is a life-like, stationary replica that distracts enemies. Zane can also switch places with said clone to get out of danger or flank an enemy. Although many of the skills in this tree are devoted to making the decoy stronger, there are plenty that also increase Zane’s grenade damage.

To quickly jump over to each skill tree, be sure to click on their names above. You can also check out the skills of Amara, who is the newest Siren in the Borderlands series.