Welcome to our Brotato First Win and Other Tips guide. Get your first win, learn how to play the ranger. Some other tips and mechanics that could apply to any game. We know that there are people who have a hard time finishing the Brotato game. If you are one of those who find it difficult to finish the game, let’s take you to our Brotato guide.

Brotato First Win and Other Tips

Get your first win, learn how to play the ranger. Some other tips and mechanics that could apply to any game!

If you are trying for your first win here are some tips:
1. Try a ranged character like the ranger. (Loud and Ghost are strong if you have them unlocked)

2. Get lots of defenses so you can make mistakes. HP, Armor, Healing.

3. When shopping don’t buy small gains unless they are cheap, stick to your plan. Rare weapons are the best value and power increase.

4. Focus on Luck early. Luck on turn 1-5 will make your run much stronger. I keep taking any luck I see until about floor 10 and then focus on weapons and defense.

5. Lifesteal is good with very fast weapons like SMG, Minigun, Flamethrower.
This is true to a lesser extent for AOE weapons but they often only hit 1-2 enemies.

6. The more HP you have the better regeneration is. Regen scales based on your max hp.

9. The boss dies automatically after 90 seconds. This means you can just dodge and survive or kill him, your choice.

10. Early DPS is important because killing all enemies means you will get all the loot. Filling all 6 of your weapon slots is the fastest way to increase your DPS early, even if the weapons you pick are not ideal.

11. The best weapons depend on character but in general they are:

Other ranged weapons are mostly single target so you can get overrun unless you have tons of damage or attack speed.
Melee weapons are all AOE which is great, but short range.

Getting an early Ghost Axe or Ghost Sceptre can be a huge advantage, but be careful not to give up on so much DPS that you are not killing everything, otherwise that Ghost weapons are not helping you enough. I often start with Ghost Axe and get an early Ghost Sceptre, then transition to better weapons later. 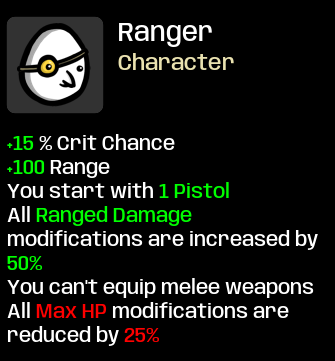 The best way to build the ranger
Weapons: SMG/Minigun with a little bit of Shredder/Rocket Launcher for AOE if you find a good one.
SMG and minigun scale very well with +ranged damage since they attack 10+ times a second. Ranger gets +50% on ranged damage so this is a natural synergy.

AOE weapons effectively attack many times a second also because they can AOE and hit 10 enemies. But often they only hit 2, so don’t overdo it. AOE weapons are also worse on the final boss, and he is hard.

Lifesteal is great on this build because it procs for every hit. 10 lifesteal means 10% chance to heal for 1 damage on hit. So if you attack 10 times a second with 6 weapons that means you heal for 6 HP per second. This is better than using a medical gun.

You also need tons of HP and armor. You will get hit by stray bullets or chargers and this means you can avoid the mistake. Also the boss does tons of damage so you want to have 50-70 HP and 5-10 armor when fighting the boss. You also want 20+ speed and some healing, it could be regen but ideally it is lifesteal since you will be shooting the boss the whole time.

Range is not that important on this build. You will find scopes that give range and damage, those are great, but otherwise feel free to take -range if you need to for some other benefit.

For the first 5-10 levels take luck whenever you see it. Especially level 1-5, even if you are offered a small bonus to luck vs a medium bonus to something else. Luck is how you get rare miniguns and SMGs, it is very important. After level +50 luck or dungeon level 10 stop investing in luck and start getting weapons and HPs and +ranged damage.

A picture of my first ranger win.
17 lifesteal meant I was healing about 10 per second vs the boss since all my guns were hitting him. This was great if I stumbled into his damage ability.
Attack speed on minigun was .06 meaning 17 attacks per second, for 13-26 damage depending on crit.

He puts red dots on the ground then they ignite 1 second later. These always appear at the same time interval – so expect them and watch your feet, don’t watch enemies or the boss.

Phase 2 he creates a circle of fire around the player. If you have 40+ speed you can run outside of the circle, slower character can easily just stand in the circle to avoid damage.

This boss also fires bullets in all directions once time ticks down to 45 seconds (starts at 90).

If you seem to be killing him quickly then keep at it, but focus on surviving. He should be mostly dead but the time you get to 45 seconds left. If he isn’t then don’t worry about killing him. Focus on living to 0 seconds and you will win.

Your lifesteal and regen should help you if you make a mistake. You can also turn on health bar above your head in the options menu so you don’t ever have to look away from your hero.

Phase 1 he spins a laser around himself. There is a gap in it you can stand in or you can just circle him at the same speed as the laser. Closer to him you will move around faster effectively.

Phase 2: He also shoots bullets in all directions slowly. Play a bit further away.
Focus 100% on dodging and staying alive and the boss bullets. Don’t worry about dealing damage, it will happen, you have enough range.

If you are ever injured continue to play defensively and heal. But you should always be focusing on staying alive.

When the timer reaches zero you win, even if the boss is alive.