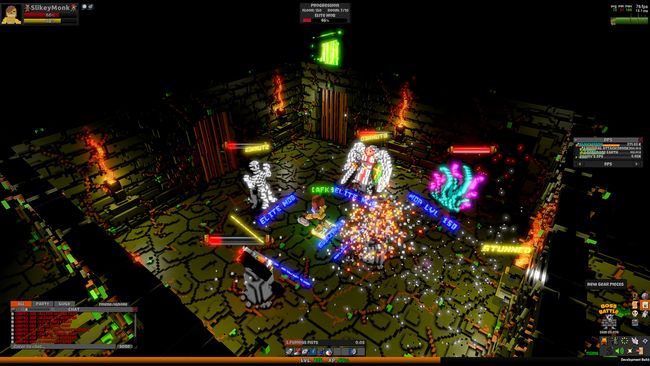 Survival is viewed as the primary progression mode as it is very fast and progressing forward in it is easy as it is all in 1 room and most classes with AoE Abilities will be *stars* in it as they will be able to most likely always hit all enemies with there attacks doing extremly high burst dps. Getting through waves of enemies here is way more efficient then in progressive.

If you lose in survival or have reached the Travel Script limit you will be kicked out of Survival and moved into Progressive.

Progressive is viewed as the slower progression mode, but it is required to push to better highs, as Survival is not infinite. The reason why progressive is slower is because it is not all in 1 room. This is where all the dungeon generations comes into play as the area you are in is bigger and enemies are scatter around. This means there are less enemies to AoE at once which will reduce the DPS of your team immensly as well as since the enemies are scattered around finishing a wave takes longer as you need to walk around and get to them first.

The Boss Event happens every hour and lasts for 5 minutes or untill the boss dies. To enter the Boss event you will have to register for it. Once registered you are registered untill you logout or you joined a group that was not registered already. The Boss difficulty depends on the Highest Floor that has been reached on the Server, increasing its difficulty, but the higher you have reached the greater your reward will be aswell.

The Boss Event will also give you 3 rewards when completed: Gold, Boss Seals and Red Shards.

For every Tier you progress the enemies will get 5% harder.
You increase by 1 tier every 10 floors.

World Buffs are bought by users or donated by Slik Daddy.
They improve specific aspects of the game making progression way easier.

As you are progressing in CR2 you will encounter lots and lots of gold. And all this gold must be wasted no matter what. But on what you might be thinking? Well there are 2 ways to use your gold. Upgrading Skills and or Upgrading Boss Seals.

Leveling comes passivly over time while you prestige. The only real way of speeding up your leveling is if you speed up your progression speed with higher DPS, but the end level will most likely be the same, For Example:
Speed DPS to Floor 100 and your level might be 23. If you just got to Floor 100 but slower you will probably still be level 23 unless you struggled since at the end you will have killed the same amount of monsters more or less.

Leveling grants you an increase in your base stats and this increase is very important as it increases overtime.

You have 1-11 Skills. And most of the time we will not say the name of the ability but rather its number. For example 6 & 10 and then naming the class. Like for Example:

But you can obviously name the Ability, it will make it easier for everyone to understand 😀

Your 1-5 Abilities are active abilities that will either damage or heal.

You are able to use your skillpoints that you have recieved from killing enemies to upgrade your ability and make them more stronger, but use your skill points on wisely as you will need more than you get most of the time. [Does reset on prestige]

You are able to use your gold to upgrade the abilities cap size by 5, allowing it to increase to more powers further on in your progression. [Does not reset on prestige]

Something that you can unlock as well is auto leveling. For a quick donation of 5k gold into some mimic you can have auto level up for your ability. It does what is named for, “Auto leveling.” Use this to obviously level your abilities automatically.

“Most” Boss Seals are gained through the Boss Event.
Available improvments:

You are able to upgrade these seals as infintly as possible as we know of it now.
Their price for upgrades increases quite rapidy when it comes to gold as the price adds another 100 boss seals and 1k gold with every upgrade.

The Improvments are made through percentage(%) which can be very beneficially especially when looking towards late game when you damage abilities do not get as much damage improvment through skill upgrade. An easy upgrade through boss seals could make you deal more damage.

You should always look at Boss Seals to be upgraded as they play a very important role for progresing fast and dealing lots and lots of dps. But you do not really have to worry about the seals them selves since Gold seems to be way more rare and since the cost in gold for everyupgrade increasing by 1k you will spend a lot of gold here.

“Gems are one of the most important aspects of the game. Without them you might as well stay at Floor 50.”

The Power of your Gem depends on its own level, the Floor you are on and your gear bonus.

You are able to craft 8 different gems.

Every Gem has its own unique property to it and every class will most likely need a different gem setup, and talking about Gem setup. At this current stage we are not able give you actual good setups as we are all still experimenting but adding that 1 Defense gem has always seemed like something Viable.

The Wizard is a pure damage dealing class that specializes in AoE attacks. The majority of his attacks bounce between multiple targets which allows him to quickly take down larger groups of enemies. The wizard shines the most in Progression and Survival, but can still output large amounts of damage to the World Boss.

This instant cast ability sends a bolt of lightning that bounces to other targets up to 6 times. Each consecutive bounce deals 10% less damage. This ability is very powerful. Given the nature of this ability (instant cast, good damage, hits multiple targets, not terribly long cooldown), it is a good source of damage in Survival, Progression, and the World Boss.

Ice Spear and the normal attack are the only two non-AoE abilities in the wizard’s kit. Ice Spear is a DoT that does 8 ticks of damage over 2 seconds. Similarly to the Normal Attack, this ability does not get nearly as much time to shine as the others. Being a DoT with a cast time, it is not terribly useful in a Survival setting. It may be worth considering turning off the auto level feature for this ability during Survival runs. However, it is a great damage booster for the World Boss and should therefore not be completely forgotten about.

Flare is easily the best ability in the wizard’s arsenal at the moment. Flare can be cast 4 times before the cooldown starts, and each cast can bounce up to 6 times. The extremely high AoE potential of this ability combined with its high damage makes it an absolute wrecking ball. You would probably be weakening yourself by not using upgrading this.

Firestorm is practically a baby version of Flare. It can be cast four times before the cooldown starts. It does very reasonable and good damage, but with a much larger cast time and inability to bounce between targets, it gets outclassed by Flare. However, it is worth noting that Firestorm “…calls down a storm of fire around yourself damaging nearby targets 3 times, therefore it can deal lots of damage in more rare situations. Seeing as how it is still an AoE ability with good damage, it is still very useful.

Haste is a permanent personal cast reduction upgrade. Considering the fact that all of the wizard’s spells have cast times aside from Chain Lightning, Haste is a good skill to have. It definitely scales with time and is probably not a great investment for new wizards. Every upgrade increases it by 0.05%.

Overload is a personal damage buff that can stack up to 25 times. It has a 50% chance to proc every time you hit an enemy. The bonus damage you receive from one stack of Overload may seem small, but when you have all 25 stacks it appears to be much stronger. Keep in mind that it has a 50% chance to proc, meaning that it is highly likely you will always stay around 24-25 stacks. It is easy to keep at 25 because if the timer runs out on your stack, it does not completely remove the buff, it just reduces it by one. Every upgrade increases the damage given by one stack by 0.01%.

Ice Shield is a personal defensive buff that shields you for a percentage of your maximum health. The wizard probably is not tanking in most groups, therefore a defensive buff is probably not as helpful as a damage buff. Every upgrade increases it by 0.15%.

Final Thoughts is a Double Attack chance buff. It increases by 0.05% with each upgrade. It is good, but takes time to really shine.

Supremacy is a crit chance buff. It increases by 0.05% with each upgrade. It is very similar to Final Thoughts, but probably takes priority in the earlier stages of the game.

The Bard is seen as one of the most viable support classes in CR2. The bard is able to Buff your party up by immense powers, increasing the parties: damage, crit, defence, passive health regeneration and even improving buffs themselves.

The basic attack for the bard is quite valuable for dps. – Buffer
Its casting time is 1 second.
It is an AoE Damaging attack hitting all targets around you, which is extremly valuable in Survival.

Probably the most viable damaging ability for Survival. – Buffer
Its casting time is instant but its cooldown is 5 seconds.
It is an AoE Dot that ticks twice for a duration of 1 second, dealing good damage in Survival.

Max Health just seems way too high for it to have any meaningful impact. – ShadowMourn
Its casting time is about 0.2 seconds but its cooldown is 6 seconds.
Its an ST Damage ability that also heals for 10% of the damage dealt, but since bards do not deal the best damage and other healers are way more viable these 10% will not heal anyone.

Chant isn’t great in Survival. – ShadowMourn
Its casting time is 1 second while its cooldown sits at 8 seconds.
Its an ST Dot that ticks eight times in a duration of 2 seconds. While it has double the amount of ticks, its overall damage and the cooldown length makes it less worse as well that it is not an AoE.

Its okay-ish during event boss. – Metaslurp
Its casting time is about 0.2 seconds and its cooldown is 10 seconds long.
This is an ST Damage Ability. It can be casted 6 times rapidly before triggering the cooldown. It adds amazing damage to long lasting battles such as the Boss events even though it has such a high cooldown.

An AoE Buff reaching all your party members, increasing there Damage.
The Damage increase is done in percentages. Every upgrade done to the buff increases your bonus damage by 0.10% to max total of 50% when it has reached level 500.

An AoE Buff that goes on all your party members, which literally “Buffs their Buffs”.
The buff improvement is done in percentages. Every upgrade done will increase the buffing power by 0.07% reaching at max total of 35% once its at level 500.
This Buff has a much stronge effect on Bard Classes then it has on other classes.

An AoE Buff which will increase all your party members, Passive Health Regen.
The passive health regen increase is calculated in percentages. Every upgrade it will increase by 0.05% and at level 500 it will be at 25% increased health regen.

An AoE Buff improving the Critical Chance of everyone in your party.
The buff will increase its critical chance percentage by 0.05% on every upgrade and at Level 500 it will have reached 25%.

All of the Bards Buffs last for 60 seconds and have a 61 second cooldown.