In Days Gone, the hero’s skills are divided into three skill trees. In the game, you will find skills related to melee combat, ranged combat, and survival. It is up to you which tactics you will use and how you will develop your character. 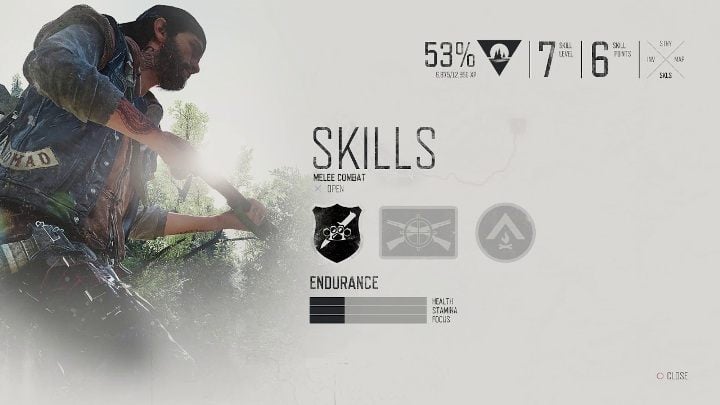 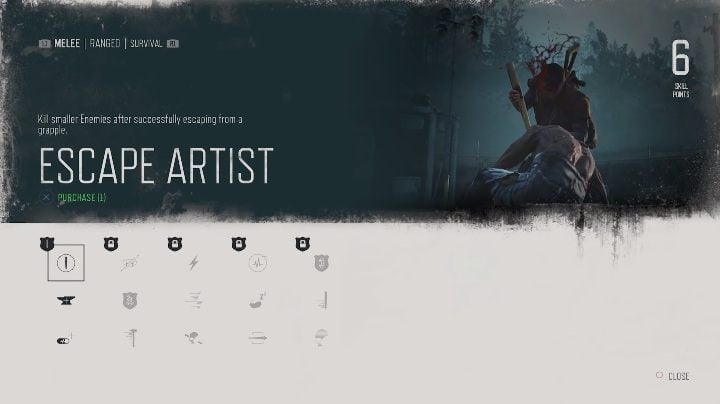 Escape Artist: If an opponent caught you, you can not only get away from him but also kill him at the same time.

Field Repairs: Allows you to repair your melee weapons with pieces of scrap.

Juice Up: Increases the initial regeneration and the duration of the Endurance Cocktail.

Busted Up: Regenerates endurance after killing an enemy in melee.

Talk Shit, Get Hit: Gives you the ability to execute longer combinations in melee.

Lightning Reflexes: After an enemy knocks you down, you can roll over to get up faster

Bull Rush: Allows you to stun your opponent with a melee attack during a sprint.

Reckoning: Gives you the chance of a critical blow in melee combat.

Just Roll With It: Reduces the endurance cost of performing a roll.

Rock On: Gives you the ability to stun an opponent by throwing a stone at him.

Retribution: Increases the chance of critical damage by 25%.

Switch It Up: Increases the damage dealt when you fight with a knife.

Executioner: Gives you the option of killing from hiding. 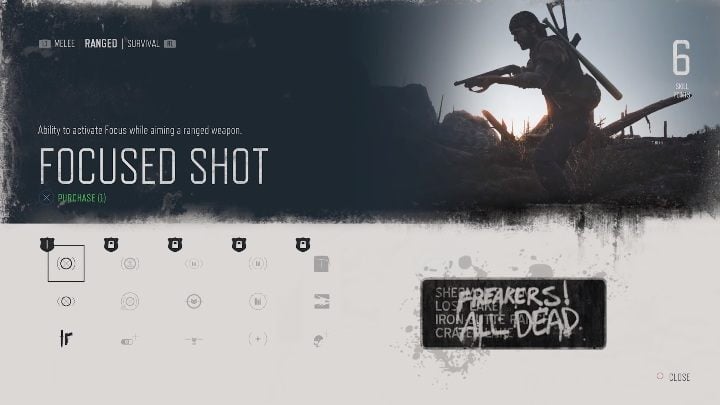 Fight and Flight: Increases precision while aiming and moving.

Vicious Cycle: Gives you the option of using a firearm after attacking with a melee weapon.

Suppression Fire: When focused, weaker shots have a better chance of stunning the enemy.

Hyper Focus: Increases the initial regeneration and the duration of the Focus Cocktail.

On the Move: Allows you to reload your weapons while sprinting.

Knocked Up: Significantly increases the damage dealt by a crossbow bolt.

Under Pressure: Eliminates the focus cost of reloading weapons in the focus mode.

Deadshot: Increases the accuracy of firearms.

Off the End: Increases the capacity of firearm magazines.

Two Birds, One Bullet: Allows projectiles to pierce an enemy and hit the next one.

Headrush: Hitting enemies in the head regenerates your health points.

Eye For Detail: Increases the time for which icons appear while using Survival Vision.

Hawkedeye: Plants appear on the mini-map.

Thorn In Your Side: It gives you the chance to retrieve crossbow bolts.

Thief In the Night: Reduces the noise generated while moving.

Green Thumb: You collect twice as many plants.

Butcher: Increases the amount of meat obtained from animals.

Catch a Breath: Reduces the time necessary for endurance regeneration.

Air To Ground: Improves Survival Vision and allows you to detect nearby enemies.

Monkey Wrench: Doubles the efficiency of using scrap, which is required to repair the motorcycle.

Second Wind: Gives an extra shot of adrenaline when the health level is low.

Carry That Weight: Increases space in your inventory for resources and materials.

Alchemist: Increases the initial regeneration and the duration of the Health Cocktail.