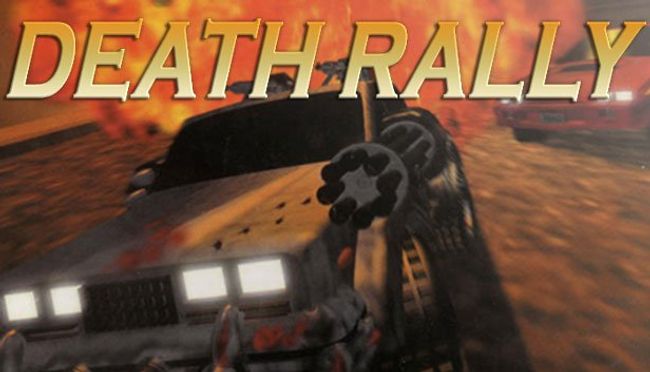 A racing game, which surely means the objective is to be first across the finish line?

Well, no. Not necessarily. As you will spot, the grid lines up in reverse championship order. As the newest driver on the grid, you’ll gain pole position. Pulling away at the head of the pack immediately results in all other drivers right up your exhaust pipe and – when the guns are enabled – a serious hammering which could prove fatal.

If you’re on the front row, pull off to the side, let the other three past then get back on the throttle and follow them, but keep about half a screen back just in case one of them decided to buy mines. That will give you a second or two to spot the little red dot indicating a mine and (hopefully) take evasive action. Mines are usually dropped at the rate of 2-3 per lap and will leave a black scorch mark/hole on the road surface after detonation.

Once they’ve used up all their ammunition (usually within the first lap), close up and prepare to grab those positions. Beware, though, that the lead driver may have a few bullets left either by not having a rival to use them on or by virtue of having picked up an ammunition power up. This could cost you the “Not A Scratch On It” bonus discussed later.

Just as long as you finish (cross the line with all laps completed) at least 3rd without being lapped, you will earn some cash plus any bonus cash tokens you picked up during the race will be added to your stash.

*Destroyed enemies still benefit from wrenches (repair power ups) – be careful not to nudge them!

*The AI is very basic and can struggle to pass a destroyed car, suffering high damage in the process. They also still register destroyed cars as a threat and will shoot them!

Remember, you don’t earn any cash if:

Upgrade Shop and the Black Market

Once you’ve finished your first race, then you unlock the Upgrade Shop and the Black Market.

The upgrade shop is fairly straightforward. The Engine improves cornering, Tyres improve protection and Armour makes you go faster. Yes, I know that’s not right…I’m not telling you something that obvious!

Top left hand corner, new car. The cost of the car is the base cost, you earn a trade-in discount based on your existing car, it’s state of repair and any upgrades it carries.

Note that the trade-in value of the car increases by less than the value of upgrades applied, so consider carefully whether it’s worth purchasing an upgrade or saving for the next model. Unless you have the Deliverator, of course.

Likewise, a damaged car loses value. Repairing the car costs less than the lost trade-in value meaning that your first action on entering this screen should always be to repair the car back to full health.

Once you’re happy here, move on to the Black Market.

Starting in the top left and working anti-clockwise:

The Loanshark: Hefty interest rates on a cash advance. I don’t really consider this to be worthwhile, you’re better off entering a couple more races to earn the cash than taking the risk of not earning enough to repay the loan. If you default on the loan, expect to suffer sabotage in the next race.

Mines: Powerful weapons (inflict about 2.5% damage regardless of vehicle or armour) and cause the affected car to “bounce” backwards slightly. Very useful to help earn the “More Car Corpses” bonus as well as slowing enemies down. I find the best place to place them is at the end of the tyre-marks denoting the exit of a corner.

Spikes: Allow you to inflict more damage when ramming an enemy than you suffer. Not really that useful, other than to remove the last sliver of health an enemy has.

Rocket Fuel: Something of a double edged sword. It’s not massive amounts of damage, but it’s not huge amounts of speed either. I’ll use this against the Adversary but not in normal races.

Sabotage: You can’t use this against the Adversary. Otherwise, it’s a nice little bonus along the way to “More Car Corpses”. Seems to affect the highest ranked opponent.

Note: pressing “Esc” whilst in the Black Market will return you to the Upgrade Shop, allowing you to spend the money you took from the loan-shark that you’re not repaying!

The Vagabond you start with isn’t able to outrun an asthmatic rock, so stick to the easy races. Likewise, it’s weak gun is only really useful to finish an enemy off. I’ve managed to pull off the odd first place, usually when the enemies are Vagabonds and/or Dervishes, sometimes when there’s a Sentinel that gets destroyed quickly. This doesn’t make it capable of competing in harder races though, as the three highest tier cars will waste you or simply leave you behind. You could upgrade the engine and tyres, but I feel you’re better served saving up to buy the Dervish straight out.

The Dervish is just fast enough to compete in Medium races, but practically only as long as your rivals are Dervishes and/or Sentinels. The gun is still nothing to shout about either, consider it to be a better gun for finishing enemies. Concentrate on the Easy races to build the cash to buy a Sentinel and, again, consider not buying engine/tyre upgrades.

Sentinels are the first car you have access to that is competitive in the Medium races. The gun is far better, capable of inflicting serious damage on your enemies. It’s not really good enough for Hard races though, even upgraded.

The Shrieker is the first car you get with a pair of guns, effectively doubling the damage potential of the car. It’s fairly easy to get both barrels on target, and the damage output makes it significantly easier to earn the “More Car Corpses” bonus. With upgrades, it becomes worthwhile entering Hard races.

The Wraith and Deliverator are both fast enough to easily compete in Hard races, with devastating firepower to boot. Once you have the Deliverator, you should be pretty close to the top of the table anyway and ready to challenge the Adversary who drives an even more potent form of the fully upgraded Deliverator.

There are two cash bonuses that you can earn in all races:

“Not A Scratch On Her” – finish a race with 2% or less damage and your sponsor will give you some extra cash. The primary reason I recommend hanging back at race start.

“More Car Corpses” – when all three rivals are destroyed, Death will stop by and pay you some cold cash for being the sole survivor of that race. Again, far easier when your rivals have taken 50%+ health off each other in the opening phase of the race.

Additionally, your manager will reward you with extra cash every few races in a row that you have won. Not so easy when hanging back but with practice you will be able to steal a few victories.

Very occasionally you will be approached before a race to perform a mission:

“Assassination” – ensure that the named driver is eliminated from the race by destroying their car to earn the cash reward. Not much to say, other than it’s unlikely to happen with the Vagabond or Dervish. Note – you don’t need to damage their vehicle at all, just as long as it’s destroyed.

“Drugs” – the drugs the dealer wants are in one of the locations where you would find the big $/Wrench. To complete this mission, you must grab the drugs, and then finish first. The AI tends not to drive near the drugs, so most of the time you can claim the drugs…but then you still have to finish first. Consider your car and the rival racers before accepting or rejecting this.

In all cases, the value of the reward is based on the car you drive. For example, a Vagabond achieving “Not A Scratch On Her” will gain $350 whereas a Sentinel would net $1,500.