Choosing your race for the first playthrough in Endless Space is not something obvious. There are more differences between the factions than stat bonuses or the appearance of citizens and spaceships – some of them have completely different gameplay philosophy or things like preferred planetary environments. Some races feature a classic development path, but all of them share the need to expand their territory, develop technologies and, in most cases, increase their population. Below, you’ll find a number of hints and useful information concerning your race choice for your first and subsequent playthroughs (especially if you’ve never played similar games before), as well as some explanations concerning the elements neglected by the game tutorial and manual.

Humans (United Empire) and The Sophons

Influence points can be used in many ways, for example, to speed up production or research.
Humans a.k.a. the United Empire. It’s one of the more conventional races in the game, although not without some exceptions. Their special trait is the ability to spend Influence points, normally used on things like border expansion, development of colonies, upholding of laws and acts in your empire, or diplomacy. The EU is able to use Influence to speed up upgrade and ship production in star systems, as well as speed up technological research. Additionally, they can also spend Influence points in trade, which significantly helps during the game and enables you to use Influence as an alternative to Dust. The representatives of this race have a small bonus to Influence generation, and some of the Industry points you spend will also generate Influence, enabling you to quickly amass a large amount of the latter. The faction possesses a bonus to peaceful conquest, e.g. through culture, which also requires Influence points. A large pool of Influence will grant you a significant flexibility and advantage over other civilizations. The colonization process is conventional, requiring you to send a colonization ship to a star system with suitable planets. Their ships are equipped with more weapons modules than most other factions, making it easier to build a strong fleet. Each race is given a set of plot-related quests. Complete those quests early on, and you’ll be able to choose an additional hero from among the 3 available classes, which certainly won’t hurt your chances of success.

The Sophons. They are a race of scientists, focusing around various bonuses to research and exploration. Their representatives have an increased science bonus when inhabiting cold worlds. They also gain a science bonus when they research a technology before other factions. They also have the knowledge of the technological progress of other factions. This will enable you to quickly gain the upper hand when it comes to technology, which is an important element to any victory condition. What’s more, it will enable you to catch up in aspects in which you may be lacking. Their ships are somewhat weaker, but if the Scientific party remains in power for a longer period of time (you begin the game with their representative in the government), you can introduce a highest-tier law, which adds 50% to the power of your attack modules. The exploration is made easier by the special ability to detect nearby star systems. Colonization takes place the same way it does with human civilization, so you should focus on systems close to your capital or nearby already controlled ones.

The Lumeri, The Horatio, The Cravers.

The Lumeri. They are a race of traders, whose power is based on Dust. They live and develop exactly as the two previous races, except their focus lies on acquisition and usage of Dust. They have a large bonus to Approval in each star system, and their representatives generate additional Dust. The basic difference is the colonization method. They do not need nor have colonization vessels. If you need to acquire a specific system, and have the technology to inhabit that specific world, all you need to do is buy the planet. An outpost will appear automatically and it will develop as all other such facilities. You can also sell the outpost belonging to another faction, earning additional funds. The Lumeri can quickly expand their empire, claiming the best available systems. Additionally, their trading companies can operate on territories belonging to other empires, even those that are not friendly. Many of their technologies and system upgrades provide bonus to Dust production. The last thing you need to know about The Lumeri is the fact that they can also use Dust when interacting with minor factions. Relations are established by spending Influence points, but increased by bribing factions with Dust. This way you can much faster assimilate such factions or establish alliances with them. The Lumeri love for moneymaking is a perfect match for their usage of the trading place and buying production on star systems. A great faction for people who like to use money to deal with problems and prefer peaceful gameplay.

The Horatio. Their gameplay is similar to the previous races, and their quests and technologies tend to favor either Food production or population growth. Their representatives provide a bonus to Food production and Approval on hot worlds. Additionally, they have an additional citizen on each planet. They also have a certain, very unique trait. They can copy the genes of other races living in their empire, allowing The Horation to gain a partial or even enhanced bonus of a given race. That’s why it will be important for you to quickly acquire representatives of other races, and either dispose of them as soon as you get their racial bonus or increase the population to the required number. If you neglect this, the other races will soon get ahead of you in other aspects. The Horatio ships are more costly to build, but they are flexible when it comes to available modules, making it easy to mould the ships according to your vision. It’s a great race for longer playthroughs and with a galaxy densely populated by minor factions.

The Cravers. As the name suggests, they are a greedy race, feeding on other species. They gain much more FIDSI resources per citizen than other factions. This allows them to quickly expand and develop, as long as they have slaves (The Cravers must share a planet with other races). This leads to loss of the planet’s value with time. It’s good to move to another star system from time to time, to assure maximum income. You can also consume a representative of another race to increase Approval in the system. The Cravers can have two additional citizens on each planet, and their fleets can have two more command points from the start. All those bonuses, however, are overshadowed by the Eternal War trait, i.g. if the militarists rule the empire, you automatically enter Cold War state with all other empires (unless you’ve already declared war on them). When playing as The Cravers prepare for aggressive expansion and wars. You’ll need many representatives of other races to keep profiting from your own racial bonuses. It’s very hard to play this faction in a peaceful way, all the more so due to it’s favorite ideology being militarism.

The Unfallen. A tricky race, requiring you to spread vines across neighboring systems before you can colonize them. First, however, you’ll need to send special units that will help in taking over of the star system. Despite the wide influence zone, the only systems that count are those you’ve colonized (you can also control special points, such as nebulas or asteroid belts, using the same method). As a race, The Unfallen have a large bonus to Food production, and can have access to the representatives of the Guardians, a race with which they have formed a kind of symbiosis. The Unfallen can sacrifice members of their own race to increase Approval in the system. The can gain quick access to terraforming projects if you complete their story quests. The favor peaceful existence and friendly relations with other factions, and gain bonuses, also to Approval, when enjoying peace. You’ll need to make the most of the area around your capital, remembering that only systems inside your sphere of influence can be put under your control. Even minor factions need to be “linked” to your home system before they can be assimilated. That’s why their preferred gameplay should be peaceful, focused on fulfilling victory conditions other than military.

The Vodyani. In theory a very strong race, assuming you can lead them properly. Their representatives gain +4 to Dust, Science, Food, and Industry. One citizen of this faction works on all the planets you control in a system. They automatically colonize all the planets in the system once they connect their mother ship, an Ark, to the system. Their natural growth, however, is much smaller than in other races, and they need an additional resource – The Essence. To acquire it, you need to send units equipped with special modules to planets controlled by neutral civilizations. This enables you to collect large amounts of the special resource and build Arks, the mother ships on which your citizens live. It’s the only place they can inhabit. Arks can be connected to star systems, enabling you to profit from them. An Ark may leave a system in any moment a move to another one. You cannot assimilate nor acquire any other race to serve you. Due to their nomadic lifestyle The Vodyani should travel between various systems, steal Essence, and conquer other races. Arks are equally capable as warships, being heavily armed and having a lot of hit points. The development of your empire can be tricky, though, especially when there’s no other civilization nearby.

The Riftborn. It’s a race that came from another dimension, making their approach to many things rather unique. They can colonize and like to inhabit environmental conditions that scare away all the other factions. The most hostile planets, such as barren or cold ones, are their favorites; they also have a bonus to Approval on barren worlds. Even their terraforming technology works the other around and subsequent research will allow them to colonize worlds the rest of the universe thinks to be the most welcoming (such as coral, oceanic, jungle, etc.). Their representatives have a +5 bonus to Dust, Science, and Production, making them owners of the strongest racial benefits.

The most important thing is the population growth, vastly different than among other civilizations. You see, The Riftborn do not need Food – they assemble their representatives the same way they make ships or planetary upgrades. In the beginning it’s hard to increase the population, but it becomes easier later on thanks to population control. You’ll also have to produce manpower. The same goes for colonization. While you do send a colonization ship, the outpost will be the one producing new citizens, making the distance to your nearest planet not that important. You can support the development of the new colony by spending the two basic strategic resources. Their last unique trait is the ability to create singularities. When playing as the Riftborn it is important to form alliances with minor factions, not assimilate them. This will provide you with a significant bonus to manpower, exempting you from the need to produce them yourself, and sometimes offering better results altogether. It’s not easy to develop this race, but you may be able to achieve better results than with other factions. I’d suggest playing them peacefully, focusing on slow expansion. 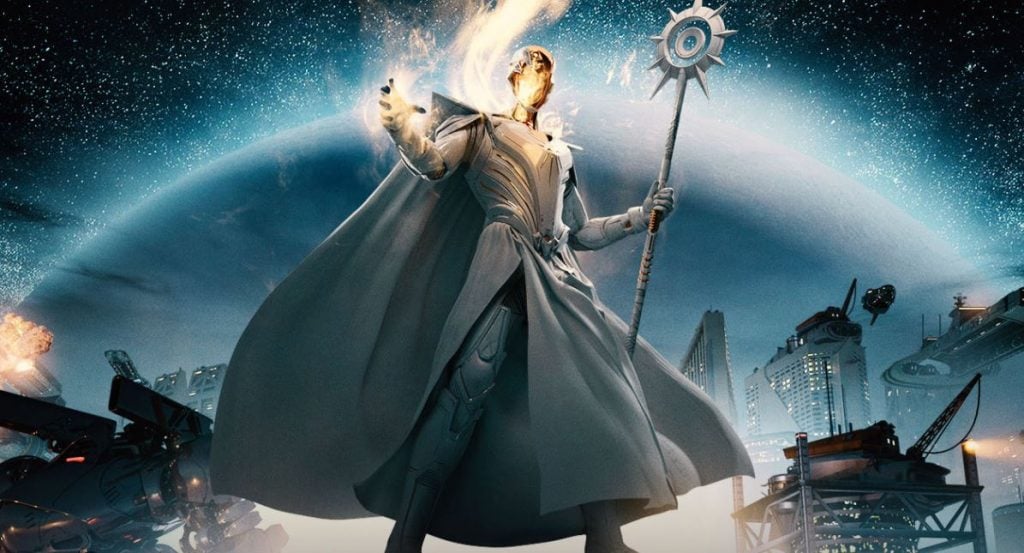