Supremacy is loaded to the brim with military updates. New heroes have been added to the Academy pool that are specialized to be Fleet Admirals. The Hissho, and their Keii faction-resource and Observance production feature, are designed for the sole purpose of expansion through warfare. Then there are the Behemoths, massive ships that can decimate fleets, obliterate entire systems in one shot once upgraded, or defend you against that very weapon in the first place.

First, let’s discuss the Hissho traits in more detail. Keii is a new faction-specific resource that replaces system’s happiness. Instead, the entire empire shares their loyalty to the Emperor through how much Keii is currently stocked up. Keii is gained through fleet battle victories, system conquest, and Deed Completions. It is lost via dishonorable actions like retreating from combat or losing control over a system. Given Keii is the sole way to control Obedience, and thus your Dust and Science output, it is critical to stockpile as much Keii as possible. At the same time, Keii can also be expended, alongside Dust and strategic resources, to invoke very powerful empire actions. Fleets can move further, a homeland defense can spring up from the ether, production values can go ballistic temporarily, or a fleet can gain significant increases to its defense and offensive output. 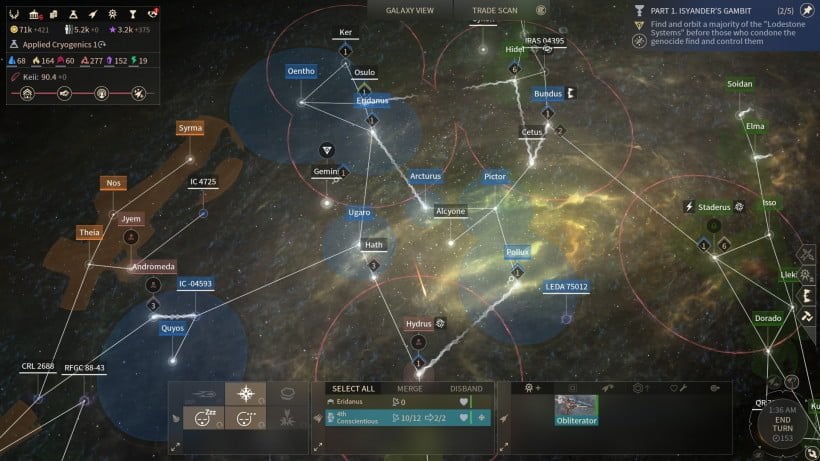 As you’ve probably guessed by now, I was a huge fan of being able to pump my economic output up by 45% consistently. Weighing usage of Keii against the negative aspects of low obedience is a constant balancing act. On harder difficulties I found myself struggling to maintain a good range of Keii, especially against multiple warfronts at the same time. Soon enough, this would spiral into economic deficits from the lower obedience, and I would race against the clock to prevent revolt or the selling of warfare assets to appease my debtors.

Observances like the ‘Diligence Ritual’ would assist in maintaining my economic output, as the Hissho’s culture revolves around the sacrifice of the individual for the greater good. In this case, increasing Dust output by 50% for 10 turns. Other observances allow you to gain manpower for fleets and invasions faster, or just gain a flat amount of Keii per population sacrificed. As a result, focusing on food production has a secondary benefit, as you can routinely make sacrifices in systems that have already filled up their population slots for greater gains. 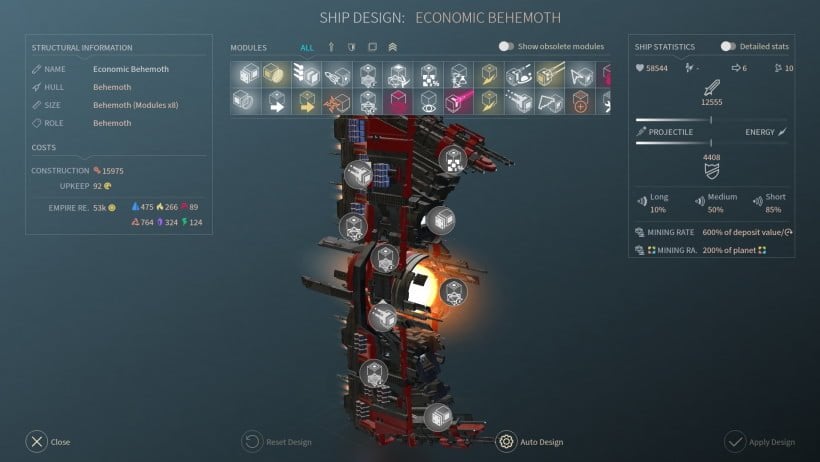 The Behemoths are where I start to have qualms with Supremacy; there’s a lot going on in this design space. They can be used as giant wrecking balls capable of destroying anything in the early game on standard difficulties. This feels fun at first, but I also worry that it throws balance completely out the window. They get progressively more powerful with tractor beams that prevent retreat, massive scaling offensive output, and eventually the ability to join standard fleets alongside smaller ships. Given they can be accessed earlier than Carriers in theory, it feels like they’re invading that power boost that comes from such a late-game technology.

Furthermore, Obliterators completely negate any reason to equip a Carrier with a Core Cracker, the offensive module capable of destroying a planet. At the cost of some additional late-game resources, or just sitting around waiting for enough turns to pass, you can instead destroy an entire system from across the galaxy with an Obliterator. It certainly fulfils the insane fantasy of an exponential arms race of a militaristic society, but it also dustbins a prior game mechanic, and that rubs me the wrong way to an extent.

On the other hand, their ability to mine from planets feels very sub-par in general, requiring a fair amount of scientific research before it begins to bear any real fruit. Being unable to mine off planets that are controlled by yourself or any other faction means eventually they will relegated to strategic resource planets that you haven’t claimed for yourself yet. As you can imagine, as the game goes on that becomes more and more niche. Furthermore, their maintenance cost begins to outweigh their economic output once you start upgrading them. 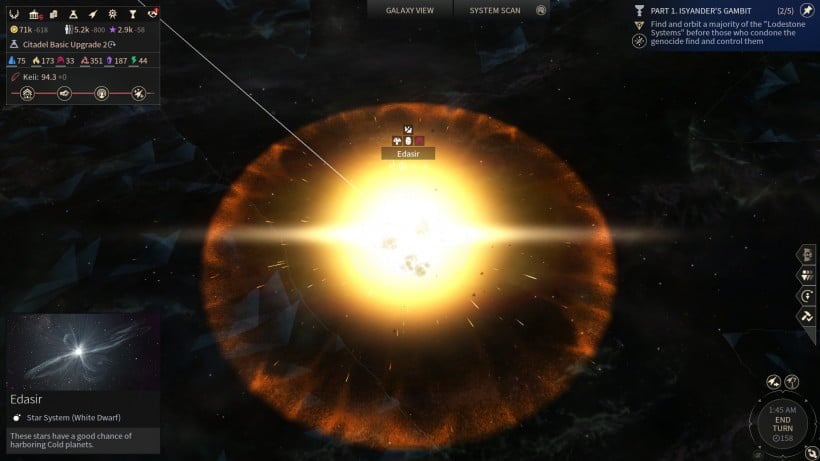 Given you cannot dock Behemoths in a hangar to lower their costs, you feel pressured to transform them into offensive weapons that will give you literal bang for your buck or Citadels to remove the maintenance cost entirely. Citadels feel underpowered, as their upfront cost really only nets you a shielding ability against the Obliterator’s systemic destruction. Eventually you can unlock a research and subsequent system upgrade to give a flat 20% increase to production and science, but until you research that outer ring tech (and thus give up time that could be spent on other significant endeavours) the bonuses they give don’t feel particularly noteworthy.