The first thing we’re going to cover in this Guide is Stats, and how they affect Power Armor Builds. Something many players are not aware of, is that each Stat adds a passive bonus. For example, each point of Endurance increases your Max Health by 5% and your Sprinting AP drain is reduced by 5%. The 3 main Stats you need for a Power Armor Build are: Strength, Intelligence and Luck.
Unfortunately none of these Stats, with the exception of Strength, really benefits a Power Armor Build in any direct way. Strength will increase your Melee Damage if you use Melee Weapons, but the only reason these are the Stats you need is because of the Perks you gain by selecting them, which isn’t ideal. Whereas many Builds benefit from the Stats they select, Power Armor Builds really do not, at least not in a direct manner. Many of the bonuses you gain from these Stats are just nice to have on any character. 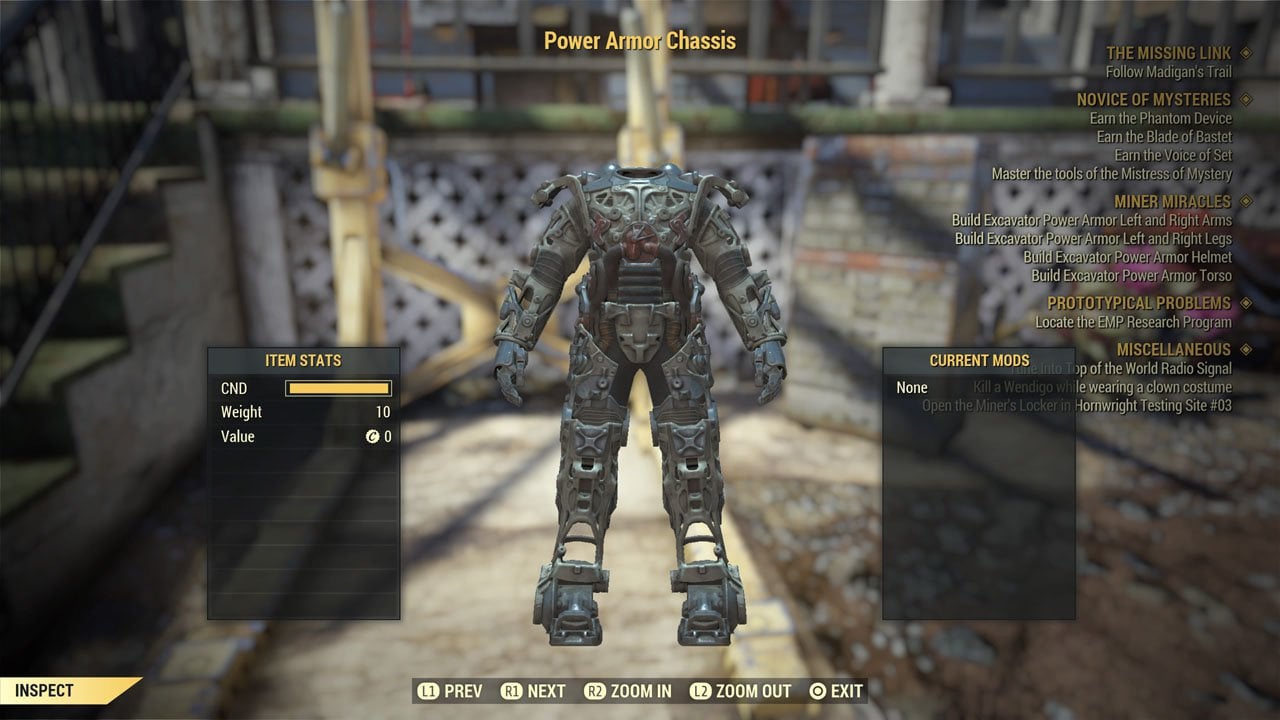 In addition, each Power Armor uses a Fusion Core to Power it, and cannot run without one. This means that you need a steady supply of Fusion Cores so that you can continue to operate your Power Armor. You can find Fusion Cores in other suits of Power Armor, you can find them in Fusion Core Generators, or you can Craft them. The exact amount of time that you can operate Power Armor on one Fusion Core is not currently known, but their power is consumed faster by Sprinting and moving about. Estimations range from about 30 minutes to 2 hours depending on gameplay. This can be increased by taking the Perk Power User once you reach Level 50.

Players wearing Power Armor will also have their Strength automatically increased to 11 on their Stat sheet, although this will not allow you to slot more Perk Cards. It does, however, increase your Melee Damage and Carry Weight if you have less than 11 Strength. Unfortunately many of the best Heavy Guns Perks are in Strength, meaning that this benefit is wasted at later levels of the game (when your Strength is higher than 11) for this Build.

Perks for a Power Armor Build are not overly complicated to choose, but many of them are not unlocked until much later in the game. Unfortunately, this means that you will not really be playing a Power Armor “Build” until you reach about level 30, even if that is your goal from the beginning of the game. Since you only need 37 Perk Points for this Power Armor efficient Build, I strongly advise using your early leveling points to select things that you wish to play with in the meantime. This means for the first 20 levels of the game or so, just play how you like, making sure to put the majority of your points into Strength, Intelligence and Luck. The good news though, is that if you are already playing the game, and you want to “convert” your Build to a Power Armor Build, it is not hard to do, since there is a lot of wiggle room.

Bear Arms : This Level 35 Perks makes your Heavy Guns weigh much much less. Take all 3 ranks to get that weight as low as you can.

Lock and Load : At Level 37 you can get this Perk that allows you to reload Heavy Weapons faster, which is always good. Take all 3 ranks.

Expert Heavy Gunner : Take this one when you get to Level 40 to further increase your Non-Explosive Heavy Gun damage. Take all 3 ranks.

Master Heavy Gunner : This Perk unlocks at level 50, and once again increases your damage with Non-Explosive Heavy Guns. Take all 3 ranks.

You can see from looking over the Strength Perks that you don’t begin to get anything for a Power Armor Build until you reach level 30, which means you will have to use other Strength Perk Cards until you get there, and even then some will be wasted. You’ll be sacrificing early game play for a Min/Max playstyle later on.

Stabilized : One of the best Perks there is for a Power Armor Build, this one increases Accuracy and Armor Pen of your Heavy Gun attacks while wearing Power Armor. Take this one at Level 36 and take all 3 ranks.

Power Smith : This Level 41 Perk allows you to Craft more advanced Power Armor, with fewer Materials and with better durability. Take all 3 ranks.

Power Patcher : This Level 44 Perk increases the durability of your Power Armor and makes it cheaper for you to repair. Take all 3 ranks.

Portable Power : This Level 49 Perk reduces the weight of your Power Armor, making it much easier to lug around, particularly when you are not wearing it. Take all 3 ranks.

Power User : This Level 50 Perk increases the lifespan of your Fusion Cores all the way up to double. Take all 3 ranks if you can.

You can see that most Intelligence Perks are quality of life Perks for Power Armor users, with the exception of Stabilized. Much like Strength Perks you won’t get them until much later in the game starting at level 27. This means you will have to substitute other Intelligence Cards earlier on in the game until you get there.

Scrounger : This Level 3 Luck Perk allows you to gather much more ammo, which you will need to stockpile as you level up for the Heavy Guns you will use later. Take at least 1 rank.

One Gun Army : An amazing Perk for this Build, this one becomes available at level 31 and increases your Stagger and Cripple chance with Heavy Guns. Take all 3 ranks.

Ricochet : This Level 40 Perk allows you to reflect damage that is fired at you. It’s a great Perk for Builds that are big targets and high Damage Resistance, like those wearing Power Armor. Take all 3 ranks.

Bloody Mess : This Level 42 Perk will increase the damage your deal by an additional 15% at rank 3. There aren’t too many ways to boost damage with this Build so take this one to max.

Much like Strength and Intelligence, you can see that you don’t really get the Perks you need until Level 30. This means for the better part of the game you will want to take other Perks to use in the interim.