Out of all the local legends, Mothman is the most hyped. Bethesda lead artist Nate Purkeypile even wore a Mothman shirt in a recent documentary about the studio. Redditors at the Fallout 76 subreddit dove into wild speculation over whether this was a cheeky Easter egg or simply a candid moment.

In any case, the Mothman is indeed a big local legend that has made its way into the mainstream. Mothman is prominently featured in several books and films, such as the Mothman Prophecies by John Keel and its movie adaptation. More recently, there were a whopping 55 reports of a “Mothman” from the Chicago metropolitan area in 2017.

West Virginians have had all sorts of theories for Mothman, ranging from it being a cryptid to a demon spawn. Atomic Wolf notes that in Fallout’s case, it’s more likely to be a pre-war experiment gone wrong or a creature mutated by the nukes.

Mothman How to Find?

To start off with, if you want to find the Mothman make sure you’re in the Point Pleasant town, which can be found on the map thanks to its rather large Mothman museum sign. Encounters with the Fallout 76 Mothman are random, so you’ll want to keep exploring the area – especially in the wooded area east of the river – until you come across it. Don’t worry if you do see it, though, as it doesn’t guarantee that you’ll be in for a fight: the Mothman won’t attack you unless you start firing at it. So try to be nice at first, ok?

Its eyes have three colours which’ll tell you how the Mothman is going to act: red means it’s aggressive, yellow is wary, and purple is passive, so it won’t attack you. Chances are that if you run into it in the wilds it’ll teleport away without trying to fight, but here’s a couple of things you need to know if you do fire a few pot shots at it. 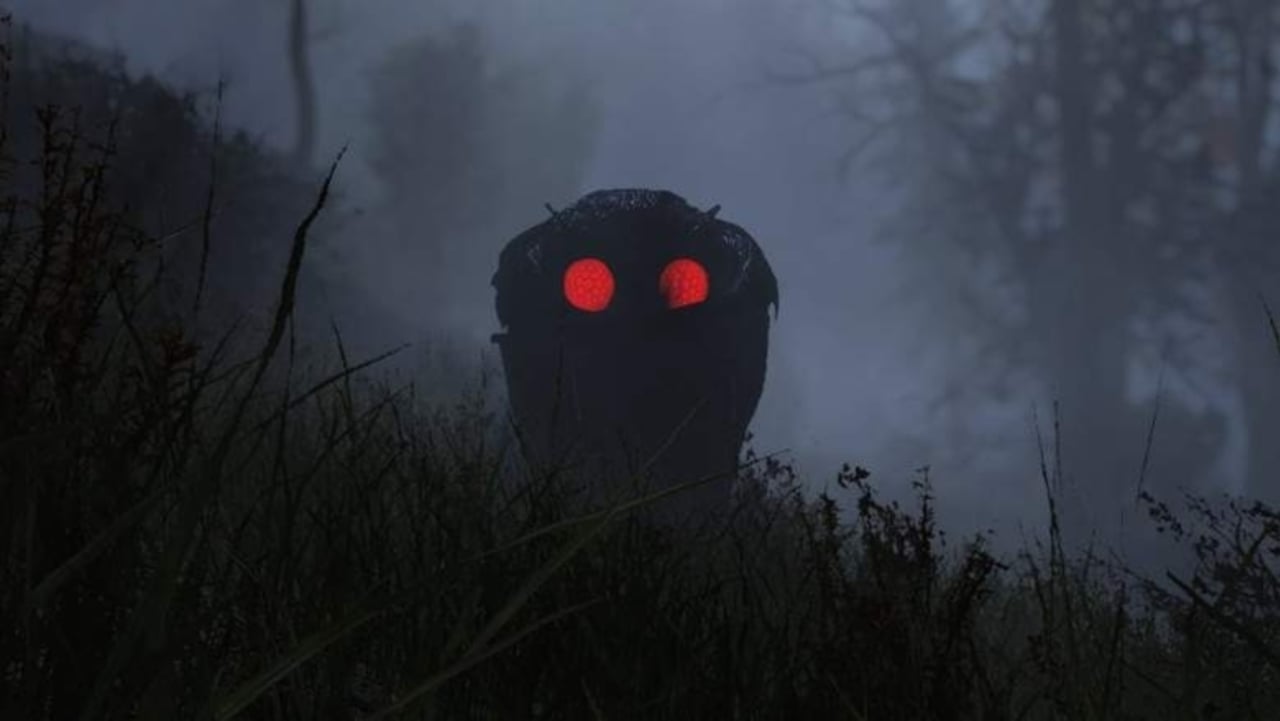 The Mothman has just two attacks, and they’re surprisingly easy to avoid. When it’s hovering a few feet off the ground it’ll fire spit projectiles (ew), and be warned: it’s able to dodge to the side pretty very quickly, so if you’re trying to attack it up close with melee you’re going to want to time your swings carefully. The second attack is easy to spot, as it’ll let loose a massive blue energy shockwave when it wraps its wings around its body. Just get out of the way by running away and attack from afar. Simple, right?

The Fallout 76 Mothman has around 1000 HP, and has 150 energy, damage, and radiation resistance, which goes up to 250 when it’s level 45+. Speaking of levelling up, the Mothman comes in three other flavours that you can fight: the Dread Mothman (level 45), the Albino Mothman (level 55 – you’ll definitely want to get a photo with this beauty), and the presumably green Glowing Mothman (level 65). 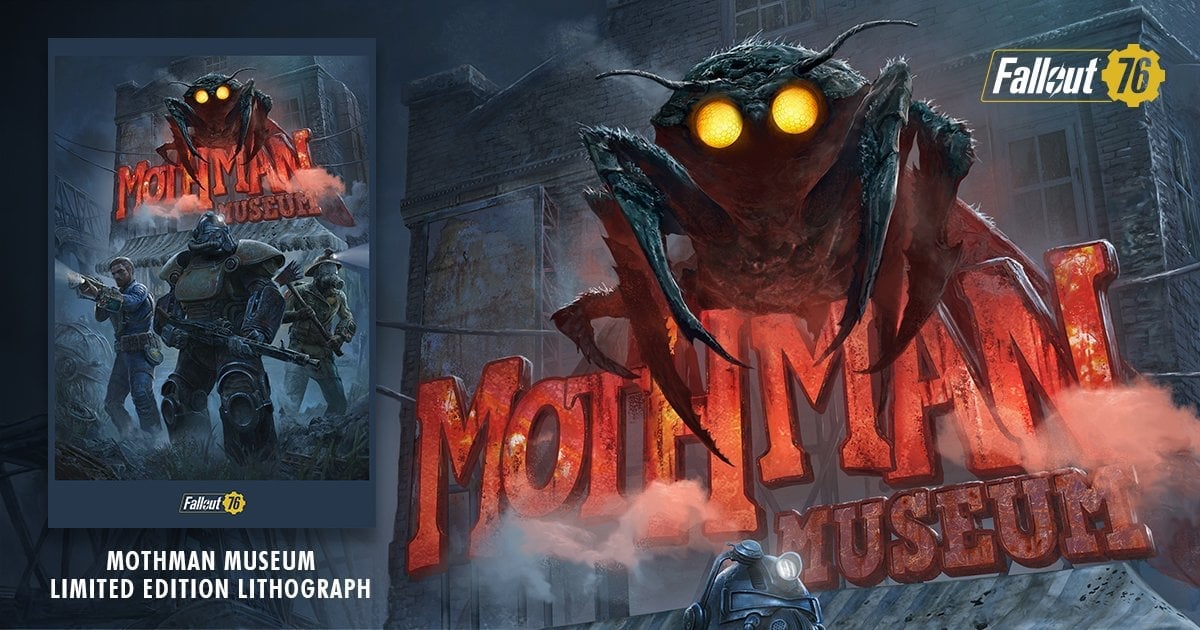 Sometimes the Mothman doesn’t want to fight at all, and if you’re in the mood for a more peaceful encounter you’ll want to find the Wise Mothman. Head to the Landview Lighthouse in the Forest region, which you’ll find by the river – there’s even a drawing of it on the map for you to head to. Handy! Complete the event at the Lighthouse, one collecting bioluminescent fluid from fireflies but beware, as the fluid is perishable and will spoil if you wait too long to hand it in. Once you’ve done the event, the happy Wise Mothman will appear and give you 5% XP boost for the next hour if you go up to it and interact with it. You’ll know it’s friendly thanks to its purple eyes – which indicate it’s calm – so don’t be afraid to approach it and say hi. 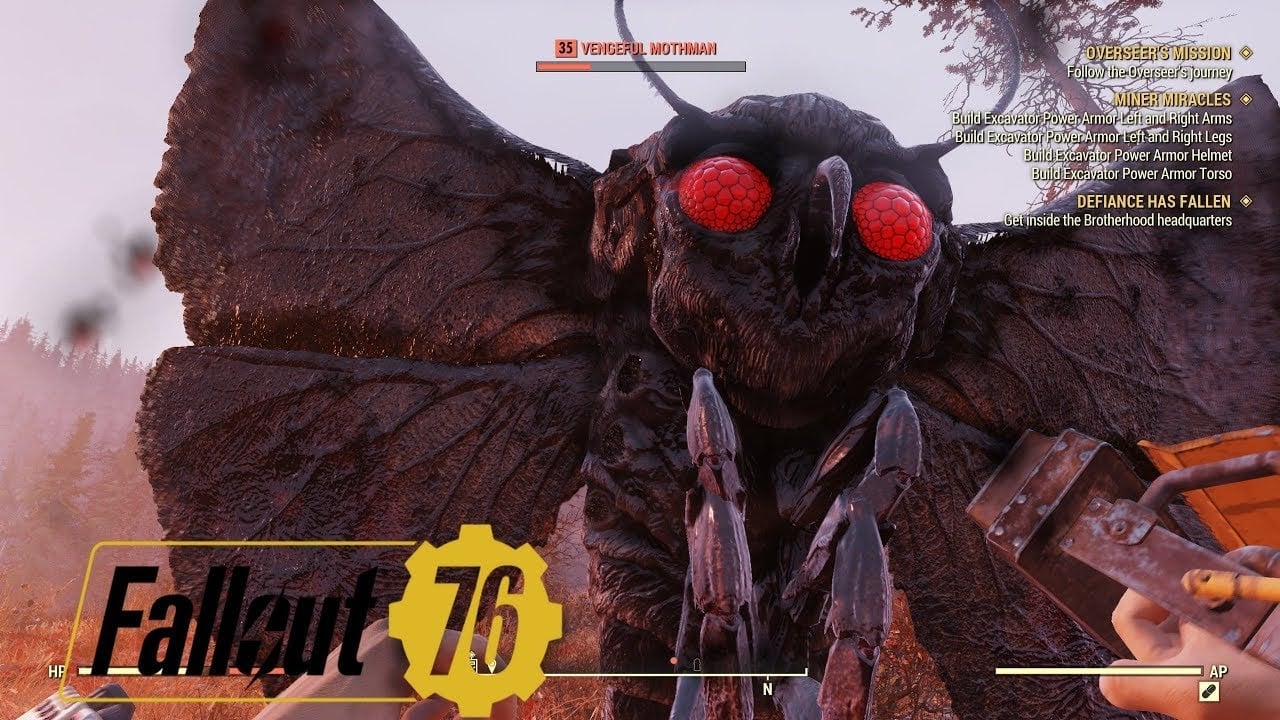 If you’re after a flat-out fight with the cryptid, you’ll want to head over to The Mire once you’re roughly level 30 – 34. Make your way to the Hunter’s Shack in the north of the region, which you can find south of the bend in the road and north of Ella Ames’ bunker. Explore the shack and the daily quest Queen of the Hunt will trigger, which will set you on a mission to find the Vengeful Mothman. Just follow my combat tips that I’ve written above to take the Vengeful Mothman down, then enjoy snapping pictures of you with its still-warm corpse in photo mode.