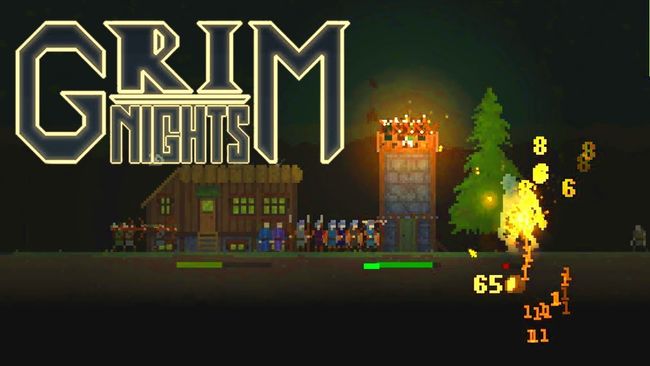 I’ve seen there’s a been a bit of confusion accessing the DLC, I actually started up the main game and got confused the first time lol. The easiest way is to open your steam library, right click on Grim Nights and (assuming you have it installed). You’ll see 2 options, one says Play Grim Nights, the other say Play Elven Curse DLC.

Villagers can (and usually should) be insta-killed. The Devs have heard the cries of our aching index fingers and added hotkeys. Press I to select a single idle villager, and press delete to murder him if you so choose. He had a family, you monster! Does not work on buildings. In addition to this, all villagers have an auto-work option on by default where if the job they were doing is completed, either a building is finished being built or a resource is depleted, they will go to the next one if there’s another nearby. Yay! Less Micromanaging.

These are the villagers you should use in your army.

“The best defense is a good defense” -Yours truly.
The goal here is to keep the enemy from getting close enough to do any damage, and that’s actually not that hard to do. Here’s how.
(I’ll go into which buildings you need in the buildings section)

Druids also have access to 3 magic spells for 10 earth mana each. A meteor that does 100 damage and has a short delay, a root that grabs enemies and holds them still, and a mushroom you can plant underground and use for food.

Potions, unfortunately are harder to get in Elven Curse. There’s only 1 way I know of to get them, and that is to kill enemies. Yep, that’s it. Sorry. The mine chests are gone and there’s no more Mogha to sacrifice villagers to for potions.

I won’t be covering how much each building costs because it says so in-game and I’m too lazy to do so. Without further adieu here we goooo!

There’s not much to say about the mine. A lot of it has been removed, though I’m not too sad to see it go. There’s only 3 levels instead of 5, there’s no more treasure chests, no more underground springs, and only 3 things to mine. The enemies don’t even stay IN the mine.

Level 1 and 2 are identical. You occasionally run into a group of Mana Leeches that immediately fly through the ground and start “attacking” the village. They only do damage if you have no mana left.

Level 3 is the same except there’s a lot more mana leaches. Like, almost every section has them.

Also, there’s no villager that mines sections faster than normal, and now that there’s a auto-work option for villagers, you hardly have to do anything in the mine except dig new sections.

That’s all you need to know about the mine. Pretty anti-climactic.

I’m not going to cover the basic enemies, they’re pretty simple, and you can read about them in-game. I will say however, that there are a LOT more flying enemies in this DLC, which makes melee units even more obsolete. Elven Curse only has 3 bosses (2 of them fly lol), down from 4 so that’s a bummer.