All in all, these guns are good. In hands of an experienced player, the heavily modded semi-automatic (SA) rifle are dangerous (2 hit kill) and match winners. Heavy modding makes the cost severely high and therefore, most people avoid it. But there lies a fine balance where this guns can be cheap and deadly.

Use effective mods, that doesn’t cost much (in repairs) and does the trick at medium distance. The effective mods here simple: (a) Trigger Field Trigger Job and (b) Barrel Scout-IIs.

If you’re a beginner and have not unlocked barrel, then the trigger will do just fine.

How to Use the Gun:

This gun is best for open areas such as roads, bridge, open fields etc where you have some line of sight and range of 50m to 125m.

How NOT to Use the Gun:

Never engage in close-quarters-combat (CQC), especially if you know that your opponent has a fully automatic gun.

M1G has a smooth recoil when using above mods and without the scope. It is also fairly accurate at 70m to 100m distance and I am used to the iron sight of M1G

The biggest advantage using SMGs are (a) repair cost is less and, (b) single mod is enough to make it a better gun to use.

Trigger Marksman Trigger Job or Spring Lightened Spring or both, makes the guns so much better and effective to use.

Better suited for CQC, especially while capping points. Fast sprint and crouching will help in accuracy in tight spaces or sudden ambush. This gun is also good for shooting at incoming vehicles.

Not suited for sprint and hip fire. Shooting at targets for distance more than 30m range will give unreliable results.

MP34 is very accurate. This gun has got me more headshots than any other SMGs.

Tommy Gun is also very accurate and has smooth sway, perfect for CQC.

Lightmachine Gun or Is It?

Don’t let the “light” in lightmachine gun (LMG) fool you. These guns are absolutely beast and shreds the enemy. None of these guns will do you wrong.

These guns are absolutely monsters even without any mods. If one wants to put the mods, simple trigger and bullet will do just fine.

These guns are absolutely crazy. It can be deadly for 50m to 100m range. Always crouch while using this gun. Use short burst for 50m to 100m targets and full auto for less than 50m targets.

Do not go full auto for targets more than 100m. Never go camping with LMGs in your hand. If you have this gun, go bananas on the enemy. This is what the gun is made for.

Although all the LMGs are great and there is no denial on that fact, but for infantry with minimal modding, the M1919 is the beast that I would recommend. However, the absolute gold star in the game is FG42, unfortunately, its only for German paratroopers.

The fully modded one hit kill (OHK) bolt action (BA) rifles with scope are the force to be reckoned with, especially with someone with camouflaged badge and patterned uniform. Most players either hunt for one or grind till achieved. The US has M1903, Germany got Kar98k, and Russia has the infamous Mosin-Nagant.

These are the guns are stock gun for recon class. Furthermore, only the recons of all factions can have 8x scope. The infantry can have 2.2x for US, 3.5x for Russia, and 4.2x for Germany.

To achieve one-hit-kill (for more than 250m) one must have (a) bullet, anschusspatrone s.S. for Germany, Match M72 for US, and 7N1 Sniper for Russia, (b) internal heavy bolt, and (c) barrel Scout II-s for infantry & Chrome Molly for recons. Scopes are necessary if one wants to have sneaky kills, whereas trigger is unnecessary to use, since the its a bolt action rifle. Although the notion of OHK is exciting, but sometimes the repair cost bumps most players post-match.

OHK BA rifles are meant for providing sniper cover and disrupt enemy attack. When scoped crouching and prone will help to reduce the sway. Changing positions after few kills is good strategy to follow. Having a binoculars is often advantageous against bush or hill campers.

SA against automatic guns, SA will loose majority of clashes. Not recommended for capping if enemy has good SMGs or LMGs. Always move your location to avoid sniper rifle hunters. 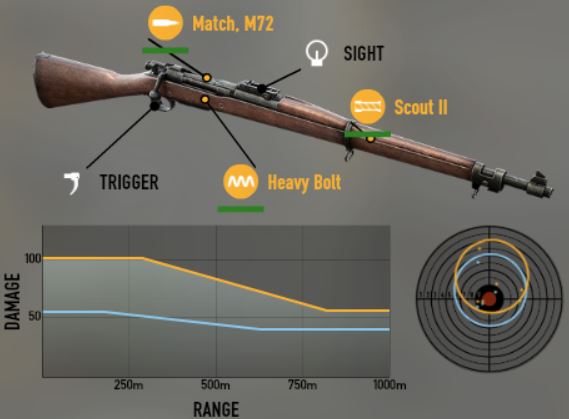 Mosin-Nagant with 3.5x scope for infantry 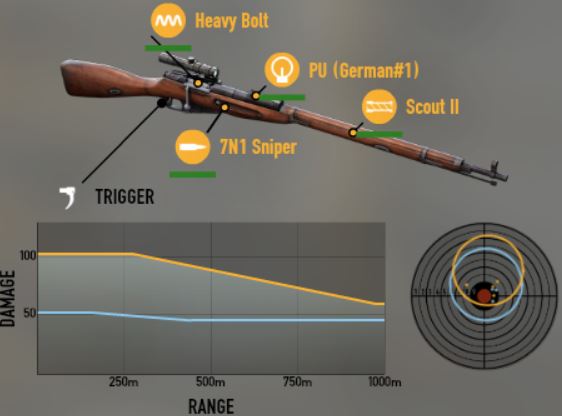 Kar98k for recon with 8x scope

Handguns are rarely used in Heroes and Generals, but playing only with handguns are fun. Player with flair and experience can make these tiny loadout very deadly. The 1 equipment point handguns are actually boon to players who wants some extra juice with them for pinch moments. The advantage of such guns is that at close range these guns are deadly and accurate.

Small guns such as 1903, Model 1934 and Korovin TK are handy for recons at close range. If the enemy doesn’t die with OHK shot, then handgun can put them down. Only M1917, Nagant and P38 can attain 2-hit kills. Handguns have mostly complimented players who are anti-tank rambos and carry loads of explosive.

Fast tapping while sprinting and hip fire will cause a lot of miss. Fully modded handguns are very expensive, so needs to be used only in pinch moments.

These tier of guns consist of newer addition guns (up to date 12 Feb 2019). The Panzerbuchse-39 for Germany, and older PTRD 1941 for Russia. The US doesn’t have any such gun (anti-material rifle) in the game. These are the ultimate OHK gun, instant death! No second chance! The only drawback is that these are slow reloading and the number of bullet is less (less than 20 bullets). 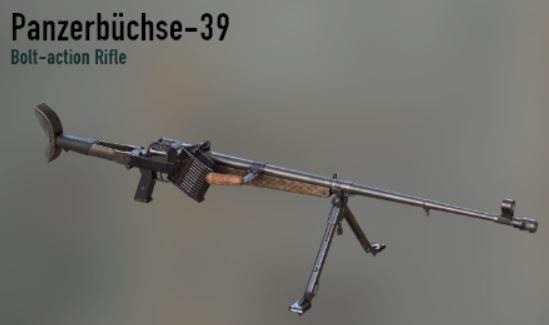 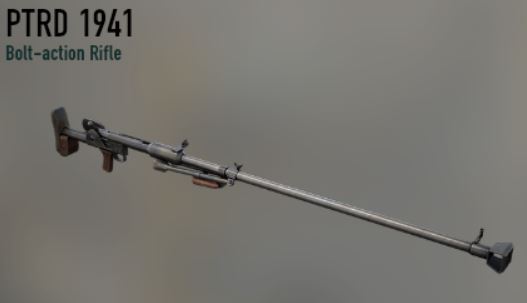 If you know that the team consists of good players. This guns give boost to the team against light armoured vehicles and light tanks & planes.

Trying to fight other gun head on, epecially against semi-automatic or SMGs & LMGs guns in a fight will be fustrating.

The M1/M2 Carbine (US), StG44 (GER), and AVS-36 (RUS), in my opinion is the “holy grail” gun for infantry. All of these guns are fast and can be changed between fully automatic & single shot. The best advantage of this gun is that, these are versatile gun. It can be both used for medium range and CQC scenarios. Plus, these can attach the scope, that makes it more deadly between 75m to 150m.

The M1/M2 Carbine is the US gun and can have the highest RPM in the game, although having high RPM causes less stability, but perfect for CQC. For maximum result and cheap repair, only using the trigger mod can make the opponents cry! If repair cost isn’t such issue, mods such as bullets, trigger and scope makes this gun the angle of death.

The StG44 is the German gun with absolute power and accuracy. Bullet and trigger mods changes this gun to ultimate death machine. This beast with scope is a match winner in the right hands.

The AVS-36 is the Russian gun with carnage and accuracy. The trigger, spring and bullet changes this gun from deadly to invincible. The accuracy of this gun take it to a higher level to its counterparts. Scope and single-action mode can give the same effect as a fully modded SA and the burst at close up can champion any CQC fight. The only issue with this gun is the 15 bullet magazine, which can be compensated by fast reload badge.

You have it, you give hell to the opponents.

Only a wuss would go and camp with this gun.

The power and accuracy without scope, is the perfect gun for my play style. 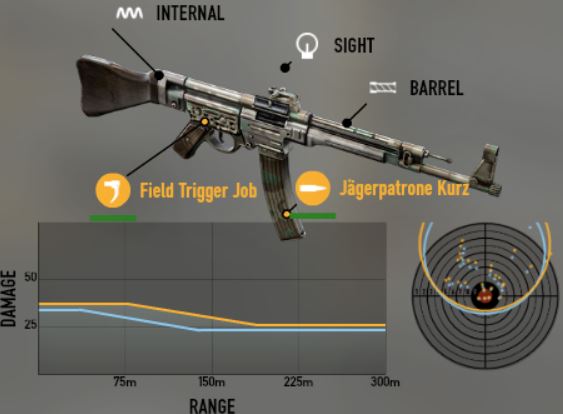 1 thought on “Heroes and Generals – Weapons”