Outer Wilds Echoes of the Eye Hints (From Start to Finish)

This will be a series of hints/directions to help you progress in the EotE DLC. It’s recommended to start this DLC after you have finished the base game and continue to play on the same save instead of starting a new one.

Early Game/ How to Start

1.The door is locked behind a pole with weird green orb thing. Strange. The place is quite dark, perhaps there is something you can turn on to help you navigate better in the dark.

Wow you made it, good job, you… What a massive place this thing is. It’s easy to get lost here. Please only use this part of the guide after you have completed a full 22 minutes loop and got stuck.

2.There seem to be some kind of projector in one of the house, maybe you can use it with a new kind of item you found.

3.So you explored all the place already, but perhaps you could have missed:

The Ship log is your friend. Revisit some slide reels can also be useful, it’s easy to miss out on information because you got overwhelmed by the place.

Mid Game (Section 2) – Before you read

Before you reach this section, make sure you have explored everything if you are following this guide and don’t want to get spoiled. The only place that should either unexplored or not fully explored are:

In order to reach the second part of the DLC, you must know a very crucial piece of information. This information can be found easily through the many slide reels scattered around the ship.

In case you somehow completely miss it:

This next section can also be quite scary and annoying, with a lots of wandering in the dark, backtracking,.. You can select the reduce fright option in the game setting to make it less spooky.

So because of that the next part will be a bit more straight forward walk-through to help you get it done quicker if you feel uncomfortable playing it (I still advise you play this section without any help if you can even if it means it’s scary, since that is the whole point of the DLC)

So you entered this new area. Everything is dark and scary. Let’s explore!

Return to the Starlit Cove

And with that you have finished the mid game and all that left is to reach the end. So close!

So by now you should have all the information needed for the ending of the DLC (unless I’m missing something, in that case, my apologize!)

Now return to the Subterranean Lake, not through the submerged structure but rather by the method you learnt at the archive earlier on.
The second seal (the raft) should be straight forward and simple.

And with that you have reached the ending of EotE. It should be straight forward there
After you see you and the Prisoner leaving on the raft. That’s the end of the DLC. You can now bring your new friend into the creation of a new universe (AKA redo the true ending, it’s worth it, trust me).

If you want to see Outer Wilds Echoes of the Eye guides, check here: 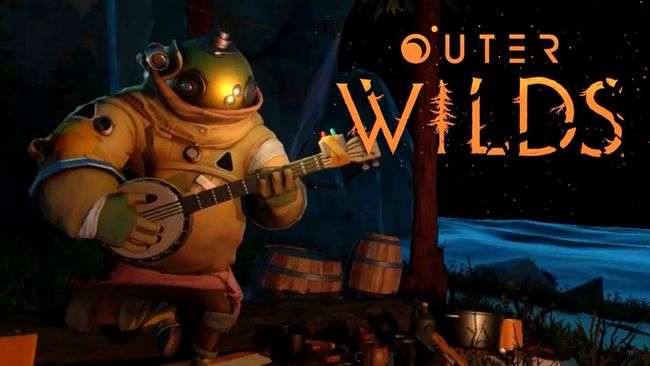