Guns and Their Stats

All guns comes with a stat card that looks something like this that list most of the attribute of a weapon. The different stats are all pretty self explanatory. 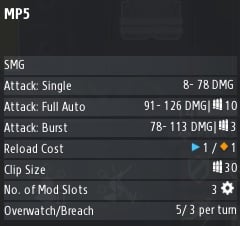 There are two things not listed, weapon tier and range. Weapons are sorted by type then weapon level so you can get an inference of the weapon’s tier fairly easily. Weapon have a hidden range stat. Your damage will quickly drop off once the target is outside of your weapon’s effective range. Weapon’s effective range should be intuitive, but sniper rifle has unlimited range while pistol and shotgun starts losing effectiveness within 10 tiles.

The main difference between the different guns can be categorized by weapon tier and weapon type. Higher tier weapon are in general straight up better than guns of previous tier, usually in terms of weapon damage. Each tier is around 10-30% more powerful than the pervious tier (that’s huge and will usually be the deciding factor on whether you can kill in one hit of two).

The main difference between the different weapon category is their fire mode and their associateid min-max damage. Generally, single shot weapon like sniper rifle and pistol have very low min-damage. This makes them weak against enemy that can dodge. Automatic weapons are on the other hand have high min-damage, meaning they’ll do high damage even on grazing hit. Additionally, when you use full-auto, the attack will greatly reduce enemy awareness beyond the enemy’s dodge cost (aka suppression). It’ll even reduce enemy awareness when they can’t afford to dodge! Shotgun is the edge case in this system where it’s single shot but has high min-damage.

Pistol
The signature weapon of any spy! They all have the useful attribute of not ending your turn when you fire with your pistol, allowing you to move-shoot-move or shoot then move, later you can even fire multiple times a turn.

One common misconception people have is that pistol has lower damage, which is not true if you compare the actual damage number. Pistol in fact often do more damage than SMG and rifles fire in burst. The best pistol avaliable in each chapter is usually more than enough to one shot any enemy on that chapter.

Pistol also gets high overwatch and breach attack making it very versatile. The only two disadvantage is that it has trouble dealing with enemy with dodge due to its low min-damage (however, pointblank attack ignore dodge, run up and shooting someone in the face then running away is a valid tactic) and it has short range.

Pistol also has the headshot ability, able to deal massive damage that ignore cover, however, headshot is countered by dodge, so don’t use it on enemy with high awareness.

Revolver
Revolvers are near identical to pistol except they have lower overwatch shots and less mod slot. The main difference you’d worry about is probably whether your agent has the right proficiency and the passive associated with the weapon training.

The avaliability for pistol and revolver are kind of mixed so in certain chapter there’ll be higher tier revolver avaliable while no upgrade for pistol appears and vice versa.

Shotgun
Shotgun are short range single shot weapon with very high max-damage AND min-damage. This make it very good against enemy with dodge and even enemy in cover early on. However, enemy health out scales shotgun pretty badly later on making shotgun less effective against enemy in cover by mid-game.

Certain background grants the buckshot ability which allows you to fire an undodgable attack that ignores cover in a short cone. Watch out, the aim origin of the buckshot attack doesn’t “step-out” so you can’t really use it from full cover. If your agent has expert marksman (single shot attack doesn’t end turn) consider using shotgun instead of pistol as they’ll be pretty similar in terms of tactical use. The lack of headshot in this case will hurt versatility though.

SMG
The jack of all trade weapon…unfortunately that also makes it kind of terrible in my opinion. since you can carry two specialized weapon with no downside anyways instead. It has automatic fire, which is the primary way of empty out enemy awareness in one attack. It has higher min-damage and range so it’s more effective as an overwatch weapon compares to pistol once combat lasts more than one turn.

Rifle
Another jack of all trade weapon. Rifle is similar to SMG but is surprisingly not really an upgrade over SMG. In general rifles does higher full-auto and single shot damage than SMG, but when it comes to the most common fire mode for these two weapons – burst fire, SMG actually wins out in terms of raw damage by a bit. However, rifle has longer effective range than SMG so rifle can still beat out SMG.

MG
Now this is the king of battle. The first MG you get is kind of terrible with only 2 attacks in a magazine but after that MG combines high max and min damage, high range, and high overwatch attacks all in one package. The only disadvantage is that it only has full-auto fire mode, which requires extra action point to attack.

Consider overwatch instead of attacking with these as much as possible. Enemy will more likely than not move under overwatch and get shredded by MG if they are flanked (not 100% consistent, but in 90% of the cases flanked enemy will move)

Sniper Rifle
Sniper rifles has unlimited range and has high max-damage but very low min-damage. It’s useless against enemy with dodge and/or good cover with its normal attack but can one shot almost any enemy with its headshot attack as long as the enemy can’t dodge.

Consider getting sure shot (make an attack Undodgeable) on agent that uses sniper rifle. This will at least counter enemy with high dodge (but not cover).