Welcome to our Potionomics Magic Numbers for Potions guide. Magical Numbers for potions that will kill a dragon, let alone a man! This guide lists all of those target numbers (each ending in 4 or 9), allowing you to pump your potions more effectively and cheaply. We know that there are people who have a hard time finishing the Potionomics game. If you are one of those who find it difficult to finish the game, let’s take you to our Potionomics guide.

If your potion is exactly one magimin short of activating a new star, it will instead be fixed to all five stars being filled. This guide lists all of those target numbers (each ending in 4 or 9), allowing you to pump your potions more effectively and cheaply.

Sadly, this mechanic is currently broken. I can only hope it’s an intentional mechanic that got disrupted, since the patch had no mention of a relevant bug fixed.

All magic numbers, organized by tier:

The last row needs to be rechecked, but in short – each tier should have 5 magic numbers. One of those is only one short of the fifth star anyway, so it is basically useless, and hasn’t been listed.

What are the magic numbers?

While playing Potionomics, you may have noticed that adding or removing certain ingredients causes you to suddenly gain or lose several stars of quality on your potion. The magic numbers are why.

The what?Whenever the total magimin count in a potion is exactly one of the numbers listed, the potion will have the most stars possible (5 stars) within its existing tier (Lesser, Common, Grand, etc.). Nothing but total magimins affects the magic numbers, no exceptions.

All magic numbers end in 4 or 9 because they are a single point short of landing on a star exactly, which makes them a multiple of 5 with 1 subtracted. The magic numbers ending in 9 make the rare odd-numbered ingredients very valuable, since you need one of them to flip your magimins count from even to odd numbers. 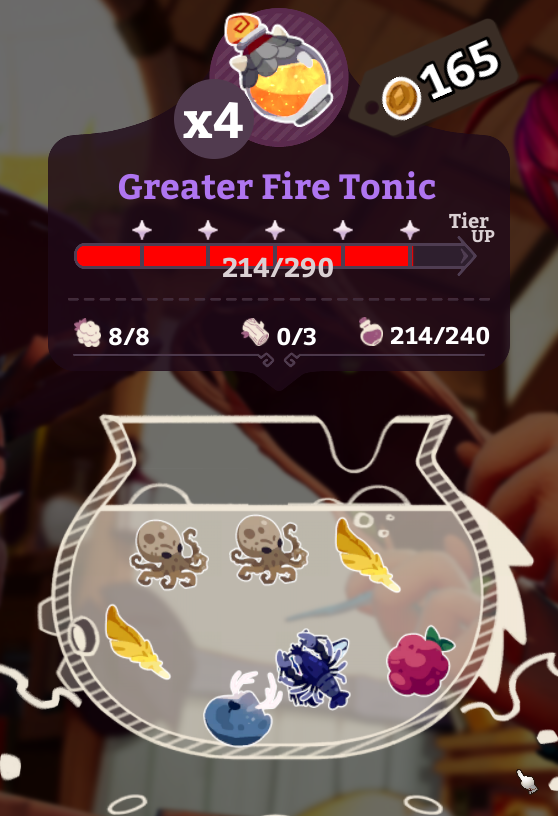 Magimin stability does not matter for this effect, but it can push a potion into the next tier of effect (or cause it to lose a star, if you have the unstable penalty). This means that even one guaranteed star from a very stable balance will always advance your potion to the next tier; the stability bonus is not shown until after you brew the potion, as with every other formula.

Despite how it may appear if you encounter a magic number without knowing the mechanic, magic numbers are not affected by the number of potions in a batch; as long as you hit a magic number exactly, you get the bonus. If you ever add an ingredient and suddenly lose a bunch of your stars, this is because you used to be on a magic number and your new ingredient caused you to overshoot it.

If you wish to test it for yourself, a few screenshots here show magic numbers in action. Feel free to experiment in-game; any item in a formula can be substituted for another of equal total magimin value but different distribution and will yield the same 5 stars despite the different color/ABCDE balance.

Magic numbers are extremely useful for maxing out the stars within a tier without committing ingredients of significant value. Magic numbers are nearly always easier to hit while maintaining a good magimin balance than brute-force higher magimin totals. Consider:

Finally, for adventuring potions, magic numbers are generally the optimal way to get potions of a higher tier. Since you can use a magic number with a perfectly stable or very stable formula to guarantee a 1-star or 0-star potion of the next tier, respectively, and your adventurers don’t care if you give them 1-star potions, unlike customers, this is almost always the most cost-effective way to convert your ingredient gold into adventurer mileage.