The law are always on the lookout for crimes in Red Dead Redemption 2. Rockstar is aiming for ultra realism with RDR2, so chances are if you think something could be considered a crime, like running someone over with your horse, or threatening someone with your gun drawn, then it’s a crime. If you want to remain out of the law’s eye don’t perform illegal acts, such as the horse attack we just mentioned.

After you’ve committed an act that could be deemed a crime, any potential witnesses will attempt to report you to the law. They’re marked on your mini map with a small eye icon, and should you let them get away, the Wanted system will kick into gear, and the law will have you marked.

How to Prevent Witnesses From Reporting You for Crimes?

But, you can obviously prevent a witness from reporting you. You can always kill them outright with a quick shot to the back while they’re running away if you want, or you can chase after them, using left trigger to lock onto them, and then press Y/Triangle to threaten them. If you can catch them and do this, you can intimidate them enough that they’ll forget about reporting you, saving you from the force of the law.

But let’s say you fail to catch the person before they reach law enforcement and report you for a crime. ‘Wanted’ will appear in the top right corner of the screen in big red letters, and while this is present on the screen, you’re being hunted by the law. On the mini map however, there’s a red area, that indicates the area in which law enforcement are hunting for you. 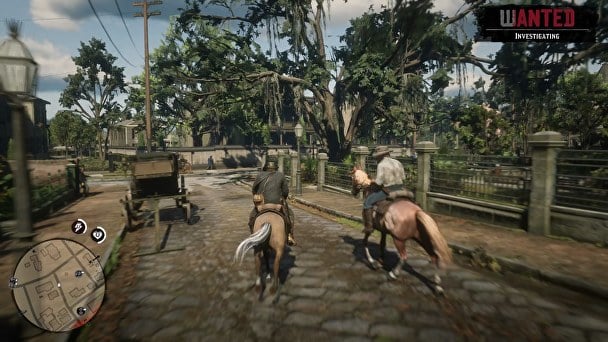 While you’re in this area, you can be attacked on sight by the law at any time. But if you go outside of the red area, the ‘Wanted’ in big red letters on the screen will gradually empty. If the meter is depleted entirely, then law enforcement will stop searching for you, effectively letting you go. This is everything you need to know about the wanted system in Red Dead Redemption 2.

Red Dead Redemption 2 contains a wide variety of law enforcement. Players can be chased by all sorts of law enforcers when commiting a crime.

Officers patrol the streets on foot or horseback, and regularly police public areas in great numbers.

Their uniform consists of a blue jacket, black pants and boots, white gloves and a black custodian helmet. They are heavily armed, carrying a revolver and rifle at any given time.

Similarly to Saint Denis, Blackwater has a uniformed police force, known as the Blackwater Police Department. Here, the Chief of Police is Oswald Dunbar.

The department’s uniform consists of a dark-blue coat with gold buttons, a badge worn on the left side of the chest and a black custodian helmet.

In Rhodes and the surrounding area, the law is enforced by officers from the Scarlett Meadows Sheriff’s Office. The town Sheriff is Leigh Gray, but is replaced by Harmon Thomas after Gray is killed in a shootout in the mission “A Short Walk in a Pretty Town”.

The Strawberry Sheriff and deputies enforce the law in Strawberry. Strawberry has its own sheriffs office from where bounties can be started and be delivered. The town Sheriff is Hanley, if he is killed in the mission “Blessed are the Meek?” he will be replaced by Vernon Farley.

Annesburg has it’s own sheriff who is assisted by guards of the mining company. The settlement does not have a sheriffs office. The town Sheriff is Jones.

Armadillo has a Sheriff Office from where a sheriff and his deputies operate. The town however is being cursed by a plague. The town Sheriff is Palmer, he will resign after being attacked by the Del Lobos gang.

Tumbleweed has its own sheriff department which is being lead by the town Sheriff, Sam Freeman. He can be found in town preeching about law and order. He is assisted by deputies.