Welcome to our Scott Pilgrim vs The World Secrets and Cheats guide. This is a guide to see all the wacky secrets this game has!

Scott Pilgrim vs The World Secrets and Cheats

Scott Pilgrim vs. The World: The Game – Complete Edition features a total of 7 playable characters, each with their own wallets. The Toronto streets can be really tough to navigate with a Lv1 character. Luckily, there’s a fast and easy way you can make all the money you need AND upgrade all of your character’s stats at the start of the game.

This exploits the Noble Sacrifice cheat, which can be entered inside any World in Story Mode. It sacrifices one of your character’s lives and gives you $50 worth of coins. The thing is, you can keep your precious lives if you’re carrying a Snack that provides HP! When you input the Noble Sacrifice code while carrying a Snack with HP, the Snack will provide you with bonus HP and prevent you from losing a life. You can then pick up all the coins, buy another Snack and repeat the process as many times as you want! 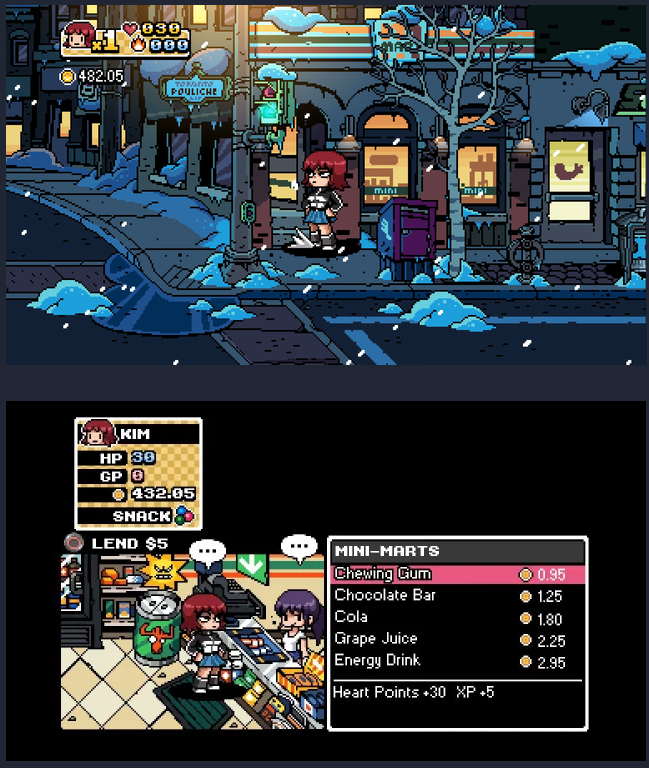 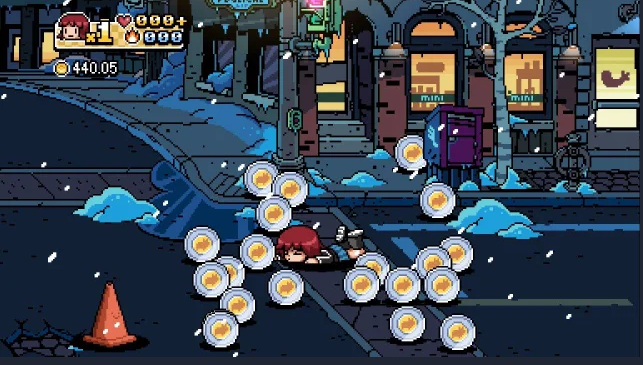 By using the process detailed above, you can max out any character’s stats from the very start of the game, and it takes less than five minutes to do!

Follow the directions above for the Infinite Money Cheat and repeat the process until you’ve gained about $600. Enter No Account Video, which is the very first store in the Shopping District, and pay Scott’s Late Fees for $504.25.

You’ll then gain access to all their upgrades. all of the videos are $4.95 Seven Shaolin Masters grants you +10 on DEF, SPD, WP, and STR. If you buy it ten times, you’ll be able to max out all of those stats on that character! You can see your character’s stats by exiting the shop, and selecting Status in the menu. If you want to get your character all the way to level 16, you can also buy Alone and Disturbed a few times as each time you’ll gain XP +1500. Additionally you may want to buy The Mystical Head for 1-Ups. the other videos are stat buffs that are already in the ones listed above anyway. PLEASE !!NOTE THAT ONCE YOU LEAVE THE SHOP YOU WILL HAVE TO PAY SCOTTS FEES AGAIN!!

Keep in mind you can use the Infinite Money Cheat in any other World, anytime you need extra cash. Lastly, if you did max out your character’s stats and leveled them up to 16, there is still one more upgrade that can only be obtained in World 6. Special Training must be purchased from Mobile’s Secret House in World 6 for $57.50. This unlocks Tech Attack 2 for that character.

Note: While the Boss Rush and Survival Horror game modes are unlocked by default, the cheat codes to unlock them are still present in the Complete Edition. 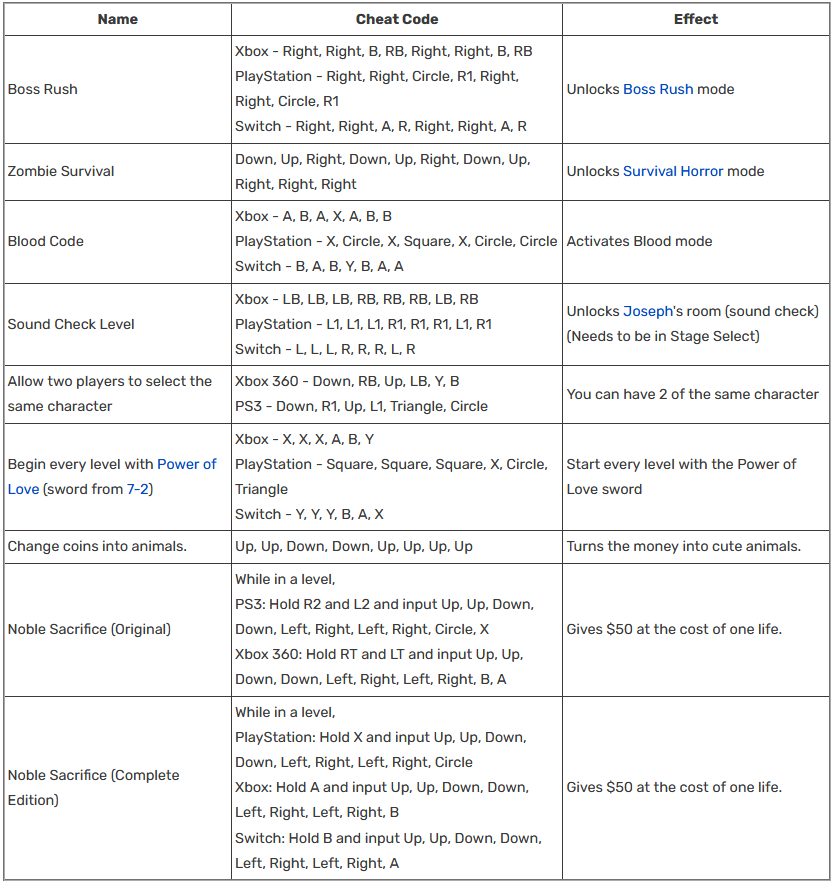 In the Snowy Toronto stage, fight your way to Hillcrest Park. Without killing the last enemy before you’re allowed to move on, move over to the middle of the right side of the screen and hold up and right. You’ll see your character slowly start to move off screen, after which you can dash blindly through the level with none of the enemies loaded. After the screen dips down and back up, hold up and right to make sure you enter the Subspace door at the end of the level. This is a great way to earn the Invulnerable trophy with very little effort.

This glitch was discovered recently, so there’s not a lot of info on it. In order to perform the glitch, stand in the lower-left corner of the first screen of the Frozen Suburbs. Then, do the Noble Sacrifice Cheat Code (see above) and hold right before respawning. It will make you float above the level, unable to be hurt by enemies on the ground. However, you can’t fight them yourself. You can escape by trying to walk up/down offscreen. Using the Noble Sacrifice while glitched like this will give you the ability to walk offscreen. It seems to be easier to pull off with a lower SPD stat. It is definitely possible to do this glitch as Ramona, Stills, and Wallace on the Complete Edition in World 1. Info on other characters/versions are currently unknown, however it is easiest to do so during and in-between levels 3 and 5.

Scott Pilgrim vs The World Secrets

In Level 6, after you get the key and fight a few of the wolverines, you should see a little house in the background with a path leading to it. The path doesn’t take you to the house, but keep walking along the top of the screen and you’ll eventually enter a secret path. Mobile’s food list is good, and he has a special training manual (for $57.50) that unlocks a special move.

In the first level shortly after the shopping district (when you enter the underground car tunnel) there will be a star on the wall near where the cars drive by, go up into that star and a hidden doorway will open leaving you with some of the best items in the game to purchase.

Unlock No Account Video Store at the Shopping District

It may seem like Scott has built up a hefty late fee of $504.25, but pay off his debts you are rewarded with some fantastic items, all for the low price of $4.95:

After beating Level 3 At Leo’s Place start the level again after the brief cut scene the screen should say go, then go to the map and start the second half of this level (use the Power of Love cheat before everything and have at least 30 strength defeat Envy and Lynette without getting hit should be easy. After completing the backstage maze Todd’s information should pop up after that you should get the achievement/trophy.
Ramona’s Item Stockpile

While playing as Ramona, hold down strong attack for five seconds and release. Ramona will pull out a random item out of her Subspace Suitcase for the cost of 20 gut points. It can spawn many different items, from bricks to katanas. This can be done as long as you have 20+ guts points, so if you have a lot of guts points, go crazy.