First things first. You must really understand your moves and corresponding controls before you can fight properly.

You and your opponents have Health and Block meters. Keep glancing at those during a fight. 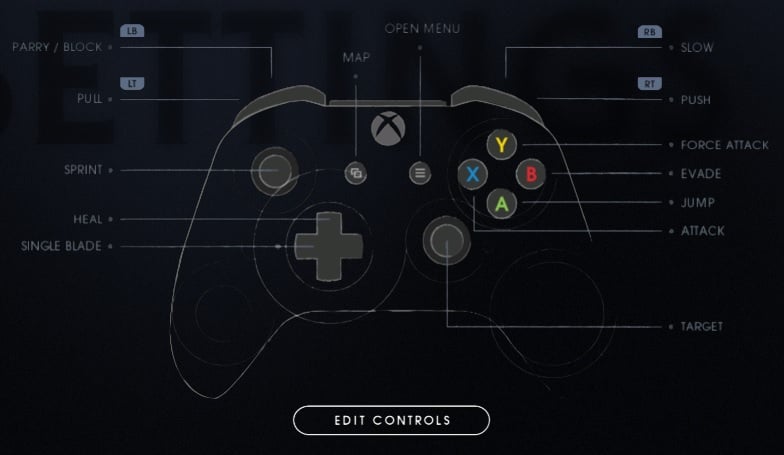 The Force powers affect one or multiple enemies, for varying amounts of time, as you upgrade Cal.

Quick-tapped Force power: The Force power when pressing and releasing the Force button. Usually much faster to cast (but of lesser effect), than the Held Force power.

In combat, time is of essence, so learn how to use your Quick-tapped powers separately, *especially* after you’ve bought the corresponding Held Force power! Likewise, when you want to cast the Held version, make sure you have enough time to do it!

1) Identify Stim opportunities. Study enemy attack pauses, and remember them. They’re usually after red attacks or long attack combo sequences. Remember these as times for you to use a Stim. If the enemy is really fast, you can stretch the time with Force Slow.
2) Be defensive first. Study their attack sequences, while Blocking or Evading.
3) Launch 1 or 2 standard Attacks and fall back. This will refill your Block and Force meters too.
Don’t get greedy! You’ll get punished if you try to put in too many attacks in one go.

Learn to use and control the Target function. Cal maneuvers very differently if Targeting vs not Targeting. When targeting, Cal always faces the enemy, and aims his attacks at the Targeted enemy. This is useful most of the time. You’ll want to choose and Target the desired enemy (using RS), and finish him off before moving to the next one.
In some instances (to use a Stim or gather your wits) you’ll actively want to run away, and to do that you’ll need to turn off Target in the middle of the fight. If you’re trying to run away and Cal’s just going around the enemy in circles, it’s because you’re Targeting that enemy.
I strongly recommend quickly learning to control Targeting.
There are Target options in the menus: I personally have them both off, but it’s your call.
Auto lock target in combat=OFF: allows me to handle the distanc ranged attackers freely
Auto switch target on enemy death=OFF (I don’t like the visible enemies only option, because if enemies are visible it’ll Target, if behind you it won’t – I find it’s an inconsistent experience which distracts me in the heat of combat).

Groups: There’s an order to this madness!

1) Defeat ranged attackers first. Run toward them (esp. if you bought the run&parry skill) and kill them. If they’re out of reach, use your lightsaber’s Parry, just before the shot hits you.
2) Defeat weaker melee enemies.
3) Defeat stronger enemies.

Use the double-saber if you have it.
Run as needed. Use your Force powers to get rid of the weaker enemies (Push…)
Target one enemy at a time until you’ve killed it, then the next one. You don’t want to be lightly damaging everyone here and there; you want to reduce their numbers asap.

Laser shots: you can Parry and reflect them back directly at the attacker. It’s timed, and easier with the single lightsaber. The Parry timing from when the shot is fired varies with the distance of the trooper, because the timing window is just before the shot hits you. Give yourself room, wait for it, kill them off one by one. Note that you don’t even have to be looking at who’s shooting at you. Listen for the shot firing, then hit your Parry, like a true Jedi!

Stims: Get to know how much Health your Stim will restore. During combat, keep an eye on your health, and as soon as you’re below that threshold, make it a priority to find a time window to use a Stim. This way you’re not wasting any Stim potential, while keeping your Health at maximum margni. Don’t wait until you’re almost dead. Also, wasting a bit of Stim health isn’t so bad, vs dying which has you start over completely.

– Cal’s oofs and grunts don’t always mean you got hit, don’t let that faze you.
– Look for and learn the monster animations, and also the sounds that give you hint as to when they’re about to hit you.

Animations are sometimes counter-intuitive to your dodge/roll direction ex.: with some very large monsters, you can roll *toward* their attacking arm as they’re sweeping at you to both avoid the hit and get to its side for you to get a free hit in on its side or back. Experiment with all directions, and whether just dodge, or roll needed. Bigger dudes often need Roll.

This game could really have used a Practice Arena. There’s not much guidance given to you on how to fight, and for players not familiar with other Souls-like games, the ramp-up can be harsh, sometimes discouraging.

If you just play the game along the storyline and keep going, you may find you’re always just behind the skill level you’d like to be at, because they keep throwing more stuff at you. Wow you scaped by, just defeating your 1st Purge Trooper, that was tough! Then a bit later they throw 2 of them at you…!

BUT, you can create your own Training Grounds! (well, sort of)

Identify Practice areas, as you progress through the game, that have good fights near a Save/Respawn point. Then go fight, learn, die, and repeat. Since you know you’ll respawn close by, there’s no pressure, and you can start really paying attention to the enemies, try things and learn. When you start winning the fight, don’t stop there! Go back to the Respawn point, Rest (so enemies come back), and redo the fight over and over.

Get into this idea of practice sessions early in the game, and it’ll really pay off with your enjoyment and ability. It’s usually easier to do this when you’ve finished a section of a map and you’re backtracking.

Nurture your inner Jedi: Be calm and distant from your emotions. Getting killed is part of the learning process, don’t get mad when you do just take it in stride.

Practice against single opponents whenever possible, taking your time to test out Evade and Parry timing and attack sequences etc. Timing your Roll, Run or Jump to get away from its various Red attacks.

Split your learning up in small bits. Focus on a specific thing to learn before every (planned) fight, for example:

Become the Jedi you were meant to be!