Engineer How to Play?

Engineer’s look at the game whether it’s on offense or defense, is important enough for it’s own guide. You will get good at Engineer once you’ll know all the mechanics and tactics, but it’s far from mastering the class. You’ll become a master texan once you’ll understand the whole mindset including four core Engineer skillsets:

The reason why I am mentioning these skillsets from the start is that if you want to understand them all, you must take a look at common engineering mistakes players often do and see the difference between understanding the class or failing the class.

There are a few mistakes that you, as an Engineer should never make. This section will go trough the common ones and teach you how to avoid them.

Picking an Engineer
This is probably the most obvious and most common mistake a few newer Engies do. Basically if you see your team contains more than 2 Engineers, just play something else. Stacking this class causes unfun games, stalemates and more often than not, another Engineer will either steal metal and ground from his fellas or won’t be benefitial to his team at all.
How to avoid this mistake:
Loadout
Another mistake which most newer Engineer players do is having unnecessary loadout combination. On defense, you’d be much better off with a Wrangler equipped than a Pistol. Little time to setup? Use Jag. Getting spammed by the Demoman? Use Short Circuit.

To put more simply, be aware and prepare your gear based on the situation.

How to avoid this mistake:
Spread Out

Probably the most common mistake among pub players is placing Sentries, Dispensers and Teleporters close to another buildings just because it looks stronger –it’s not.
Single Demoman can destroy the entire defense by just one smartly put stickies because of splash damage. However, if you move your Sentry away from your fella, it can cover another flank or route + enemies will have harder work pushing trough.

How to avoid this mistake:
Turtle Engineer

Turtle Engineer is a nickname for Engineers who likes to sit behind their Sentry gun, with Dispenser up their back and willing to die with his buildings.
You’d be more efficient if you move around your nest and check for Spies.
Also spread your buildings to a needed spots, Sentry should watch the objective, Dispenser should be put near your team, Teleporter should be active at any circumstances.

How to avoid this mistake:
Abandon just in time

Don’t be afraid to run away from your nest, let it destroy and then build another one in passive lines behind your team. Trying to save it from Über push and die simply isn’t worth it. Remember, your life if much more important than life of your buildings. Getting your buildings destroyed is a part of playing Engineer, don’t mourn too long, grab your wrench and get in fight!

How to avoid this mistake:
Engineer’s Arsenal
Sentry Gun

This does not mean that you should take a long time to adjust the Sentry Gun blueprint before placing it – doing so is a hallmark of inexperienced Engineer play.
However, observe how certain placements perform, and if the Sentry Gun demonstrates any weaknesses in that position, try to place the Sentry Gun so it will be more effective in the future.That being said: The longer it takes enemy to notice your Sentry, the better.

* DPS= Damage per second
**Rockets fires every 3 seconds, dealing 53 to 150 damage on direct hit (falloff is calculated from the distance of the Engineer to the target, not from the Sentry to the target).

Build your Dispenser in a convenient location for your teammates to reach.
Do not place your Dispenser in areas with lots of enemies nearby. They will be destroyed quickly. Try to locate the Dispenser behind an obstacle, such as a crate or a low wall, which will shield it from a fair amount of incoming damage.
But that’s not all what Dispenser can do, you can place it like a barrier against Cloaked Spies or you can jump on it to get on better places, where you’ll have an advantage.

Keep in mind that the Dispenser has 25 metal inside from start so you’ll spend 100 metal + you’ll get 25 back.

Teleporter
Make sure which direction to head is obvious to your teammates. When the Teleporter is being carried, pressing Alt-Fire rotates it 90 degrees. Use this to face your Teleporter away from walls and corners. Place it behind a cover like a rock which will shield it from incoming damage.
Avoid standing right on top of your Teleporter Exit, so as to avoid being telefragged.

An Engineer, who has a decent map knowledge can surprise his enemies with a cheeky Sentry spots. But don’t forget that the ideal spots should not prevent buildings from doing their job correctly.

Alright let’s take a look at few maps and discuss it’s most common and functional Sentry, Dispenser and Teleporters exit spots. Here are some examples: 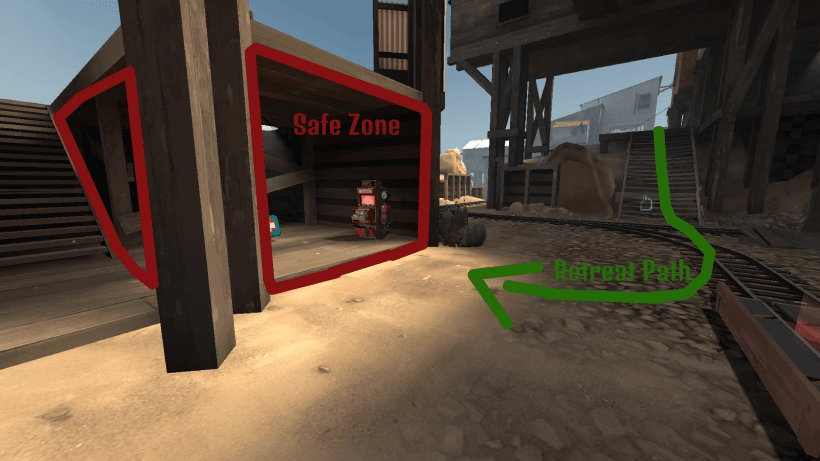 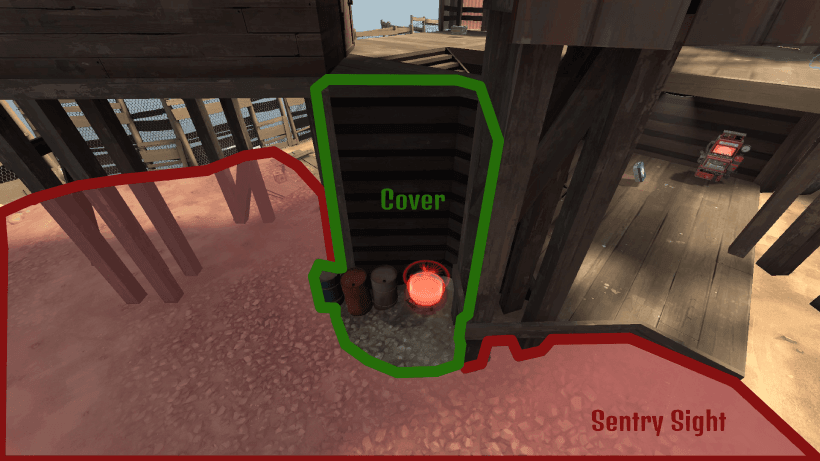 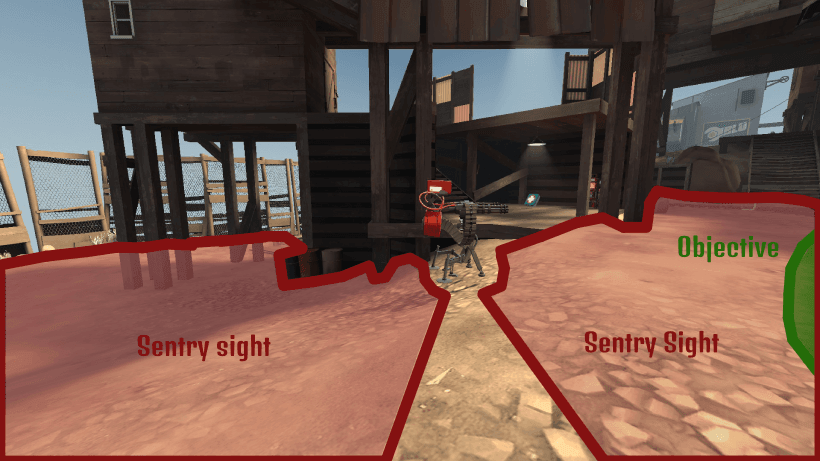 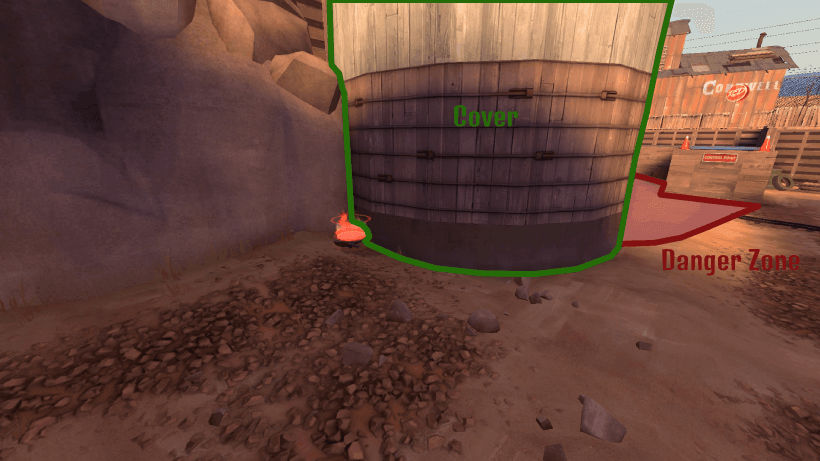 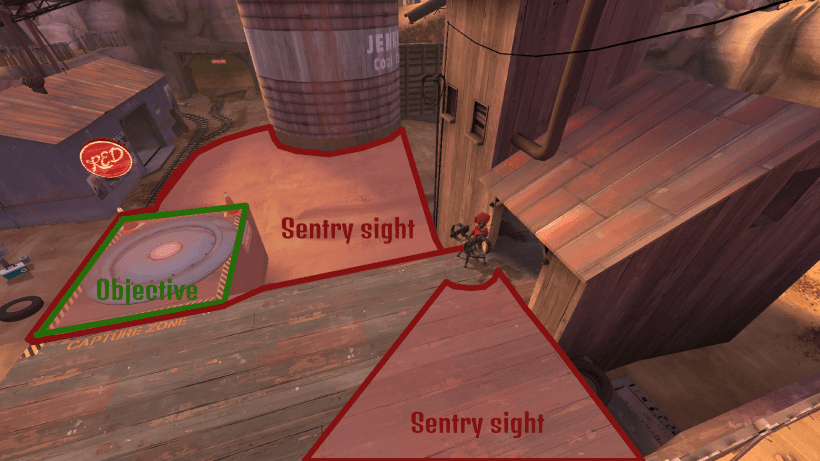 Gamesense is maybe the most important thing on advanced levels because it allows you to know your position not only around your team, but in a match as a whole. While playing as Engie, you should have an idea where the front line is. This magical line can actually help you when moving that gear up / back. For instance, when your team manage to push a little bit to claim a certain area, you want to move your gun there and secure that area, punish enemy players who wants to claim it back. I’m not talking only about moving your Sentry.
Moving a Dispenser could be more viable. Make sure you’ll keep that Dispenser behind a cover. It should be near a chokepoint or an area, where are things getting a little bit more dangerous so your team can easily retreat to refill ammo and health.Teleporter should be built slightly more back than previous buildings but also pay attention to it’s effectiveness. Having a Teleporter way behind your team,where an action is happening isn’t always good. It’s understandable to not building your shiny plate too aggressive (close to enemy team) beacuse previously mentioned front line is constantly moving so your Teleporter have small change to survive and your just teleported teammates too.
Metal Management

As you all know, Engineer’s maximum Metal capacity is 200 Metal. Good to know that Metal is diffrent from Ammo. Even you get both of these things from the same source.

Here’s a quick list of all sources of metal:

It is important to know, when you want to spend your metal or get another one. For example if you have 70 metal, you should take a medium ammo pack rather than the full one to prevent wasting a bunch of metal.

Multitasking
It’s no secret you are more effective when you’re doing multiple things at once. Developing your ability to handle more things at the same time in a rough situations really pays off.
Use this when rolling out to the front lines, upgrading, fighting or defending your buildings.The time when your Sentry go down has to come one day, and when that will happen, you have to remain calm and you should have new places to build in mind. Be effective with your blueprints, provide support to your team and lead them to victory!