Welcome to our Victoria 3 How to Move Settlements in Map Editor guide. This modding guide will describe how you can move cities and other types of settlements on the map, so that they are in a different spot at the start of the game.

We know that there are people who have a hard time finishing the Victoria 3 game. If you are one of those who find it difficult to finish the game, let’s take you to our Victoria 3 guide.

Is some city in the wrong place? Want to rearrange cities? Have you created a new state and you need to move cities around? Look no further!

Vocabulary:
– Hub / Anchor / Anchor hub : Invisible in the game, this is the point that roads and other types of splines connect to. It is associated with settlements and in the map editor it has a purple sphere around it.
– Locator : An object which has visible graphics that look like a city, farm, mine, wood camp or port. In the map editor it has a yellow sphere around it (when the appropriate settings are enabled). It is normally placed near the hub.
– Splines / Strips : Roads and other things that connect hubs

But what exactly does that mean for the map?

Hubs and locators together help define what I called in the title settlements and in the thumbnail cities. Every state has four settlements, and coastal provinces have an extra. These are:

While the roads are frequently visible always, the settlements themselves will only be on the map if the state has a building associated with that settlement type, such as a naval base for a port, or a chemical plant for a city. If during the course of your testing you want to make sure that a settlement is in the right place, start a building for that settlement!

If you don’t know how to open the map editor, you have a few choices.

The map editor is fairly resource-heavy, so if it crashes, it’s probably because you don’t have enough (free) computer resources. If this happens, try closing other programs while the editor is launching.

When it launches, and you get rid of the console if you had it open, you will see something like this: 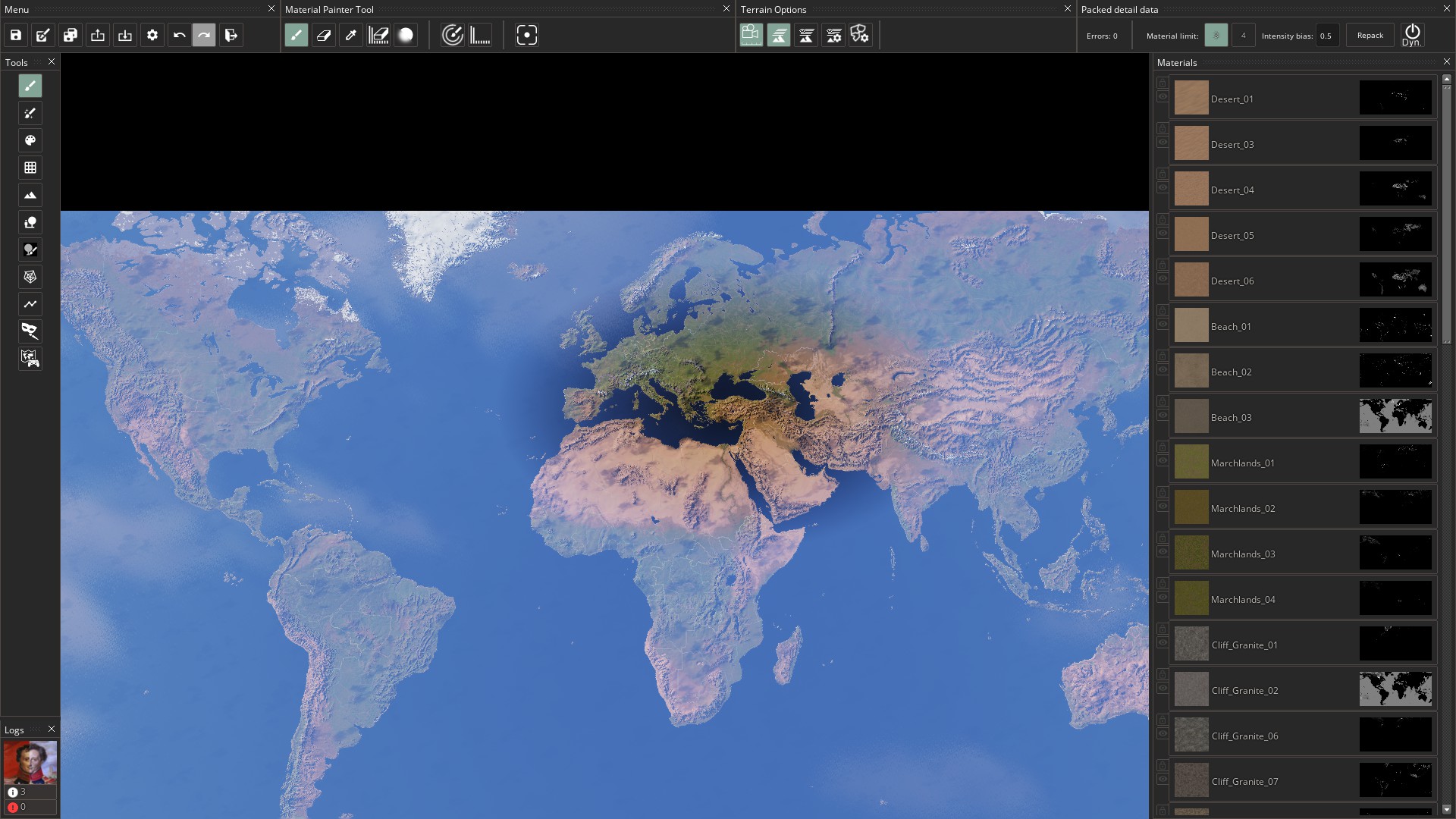 The first thing you’re going to want to do is click on the Mask Painter Tool in the left menu, the second one from the bottom. 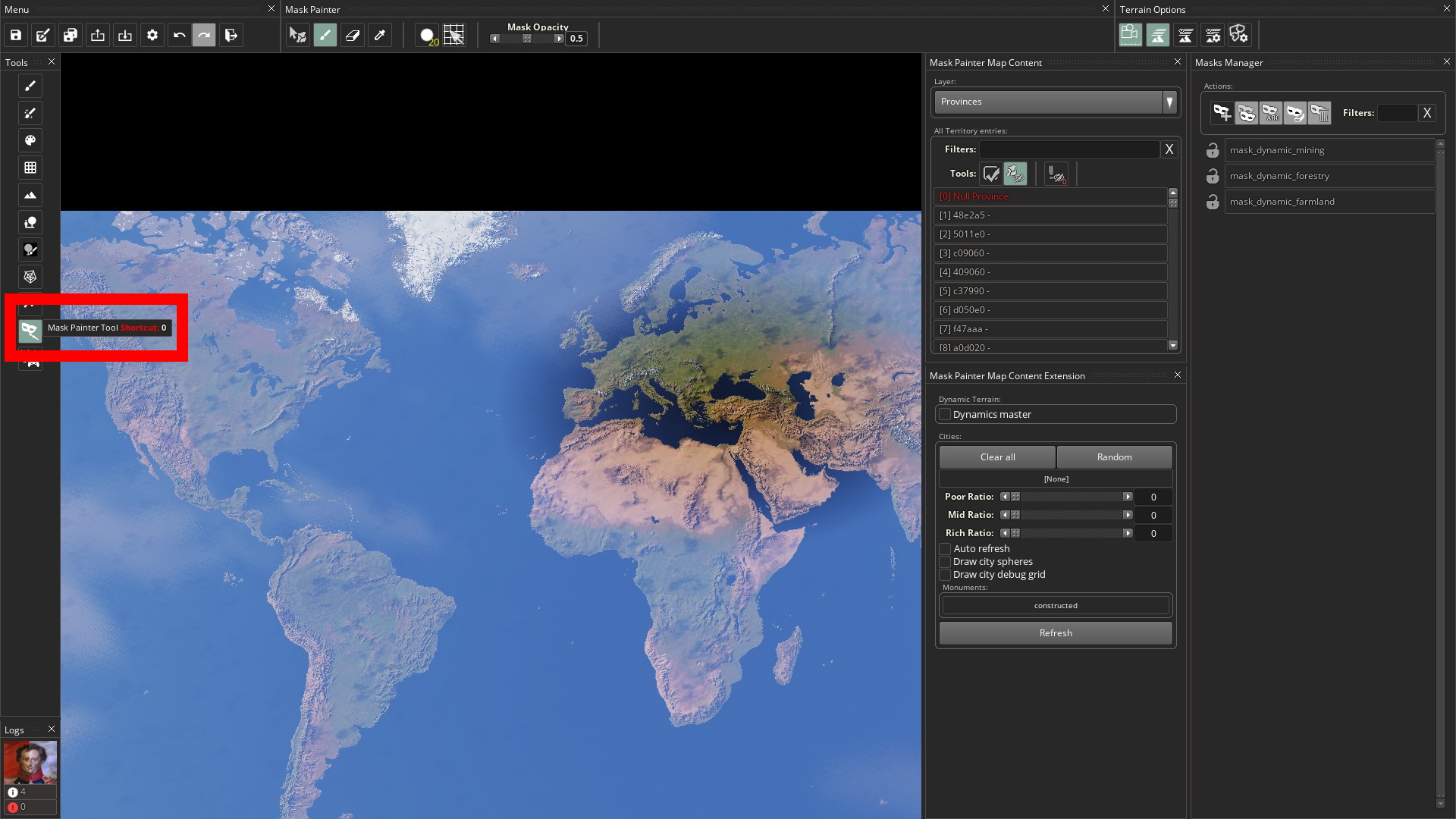 Then in the menu that it opens on the right, look at the bottom-left window and tick the two boxes circled in red: Autorefresh and Draw City Spheres. 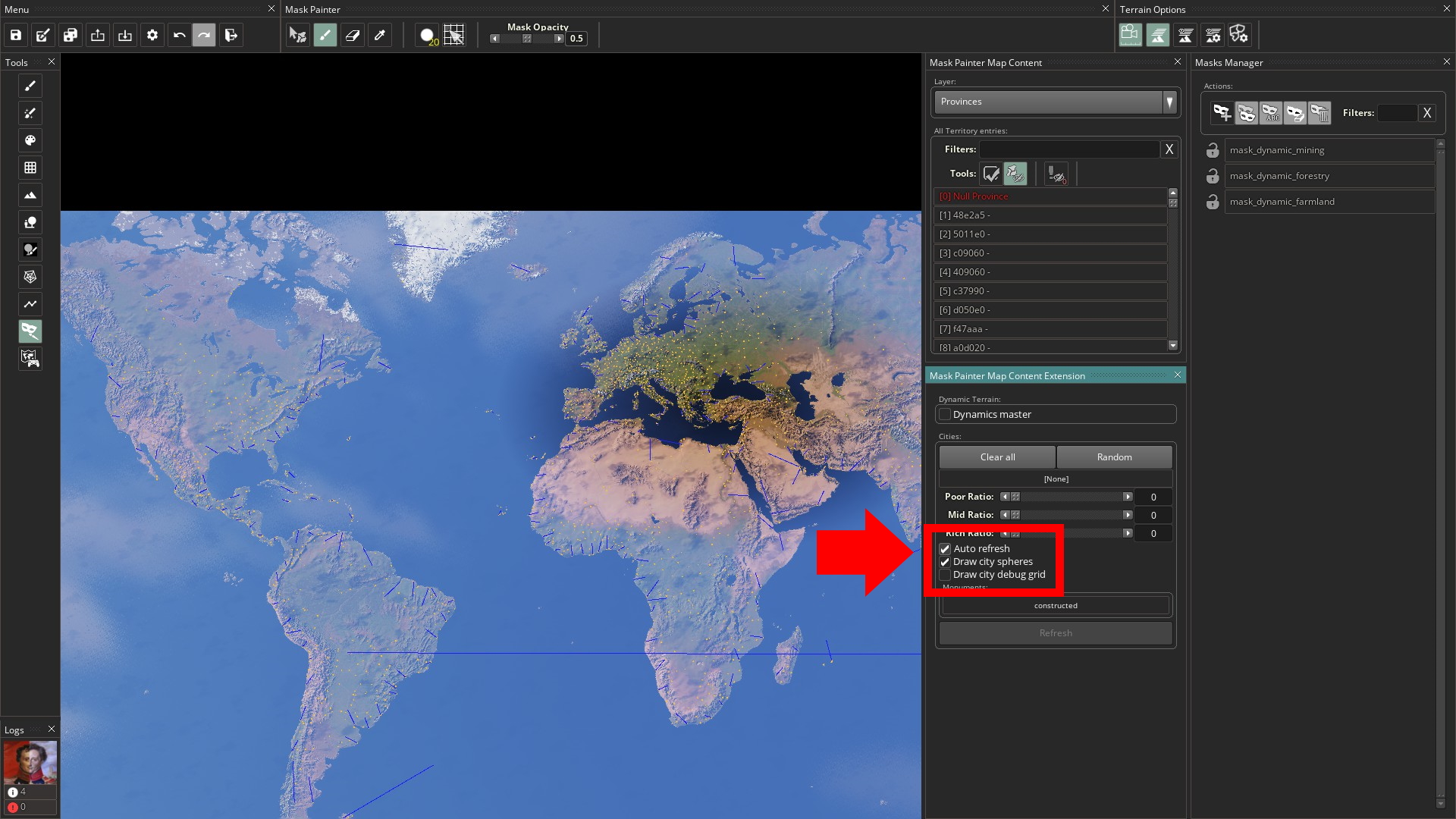 NOTE: Autorefresh requires a lot of resources, too. I have frequently crashed the editor by not giving it enough resources, so here it’s also important to make sure your computer has enough.

I’ve decided for this guide that I want to adjust the location of Tampere in Finland slightly. I’ll click the Spline Network Strip Tool so I can see hubs and their splines (the roads and other connections). 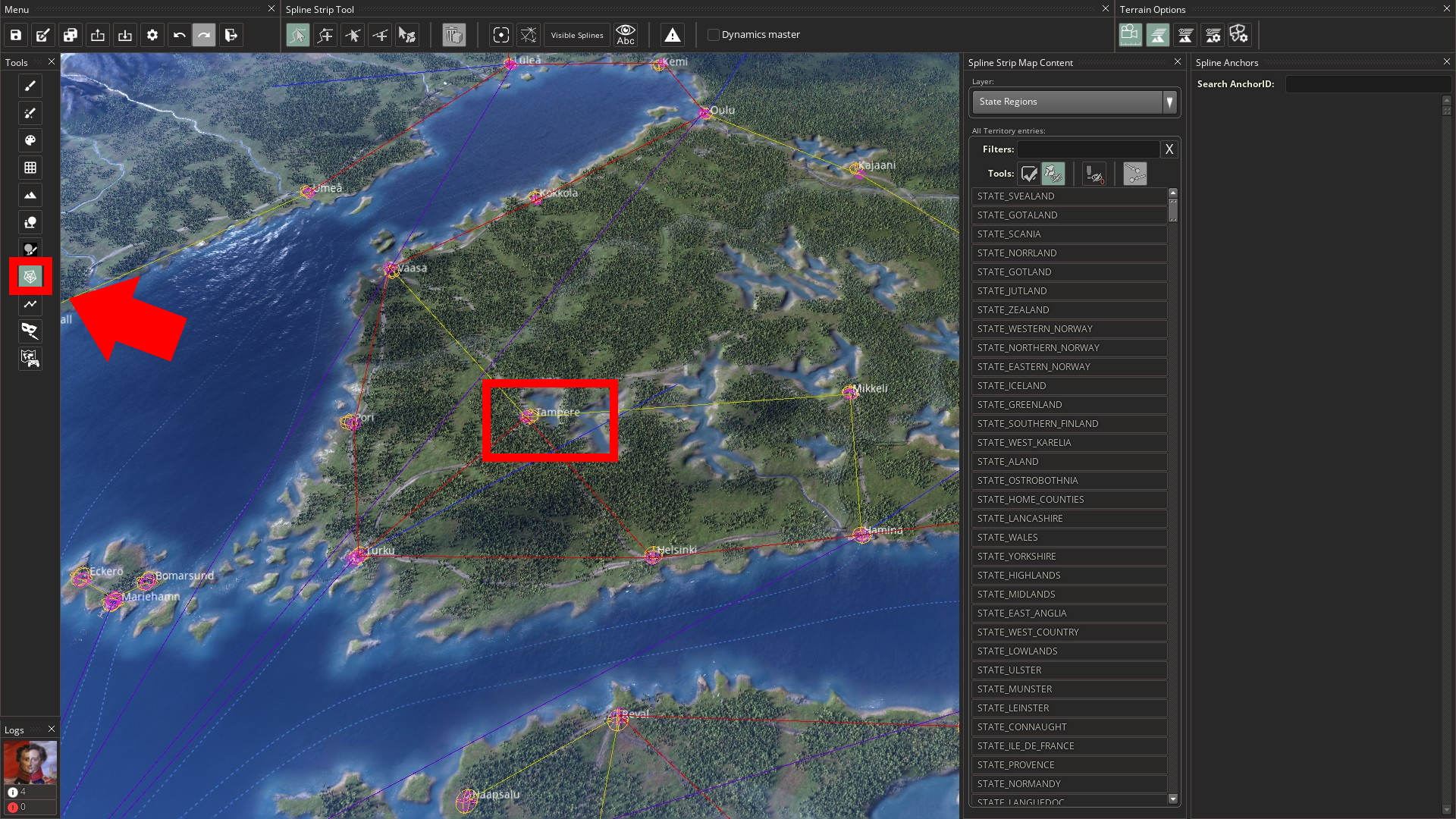 We need to move both spheres – the pink/purple one that’s the hub, and the yellow one that’s the locator. It doesn’t matter which order you move them in, but if you want the locator to be right on top of the hub (which I normally do because I don’t like the look of the ends of the roads when they just stop abruptly), then I suggest starting with the hub. That’s what I’ll do. I’ll just move it a little bit to the southeast. 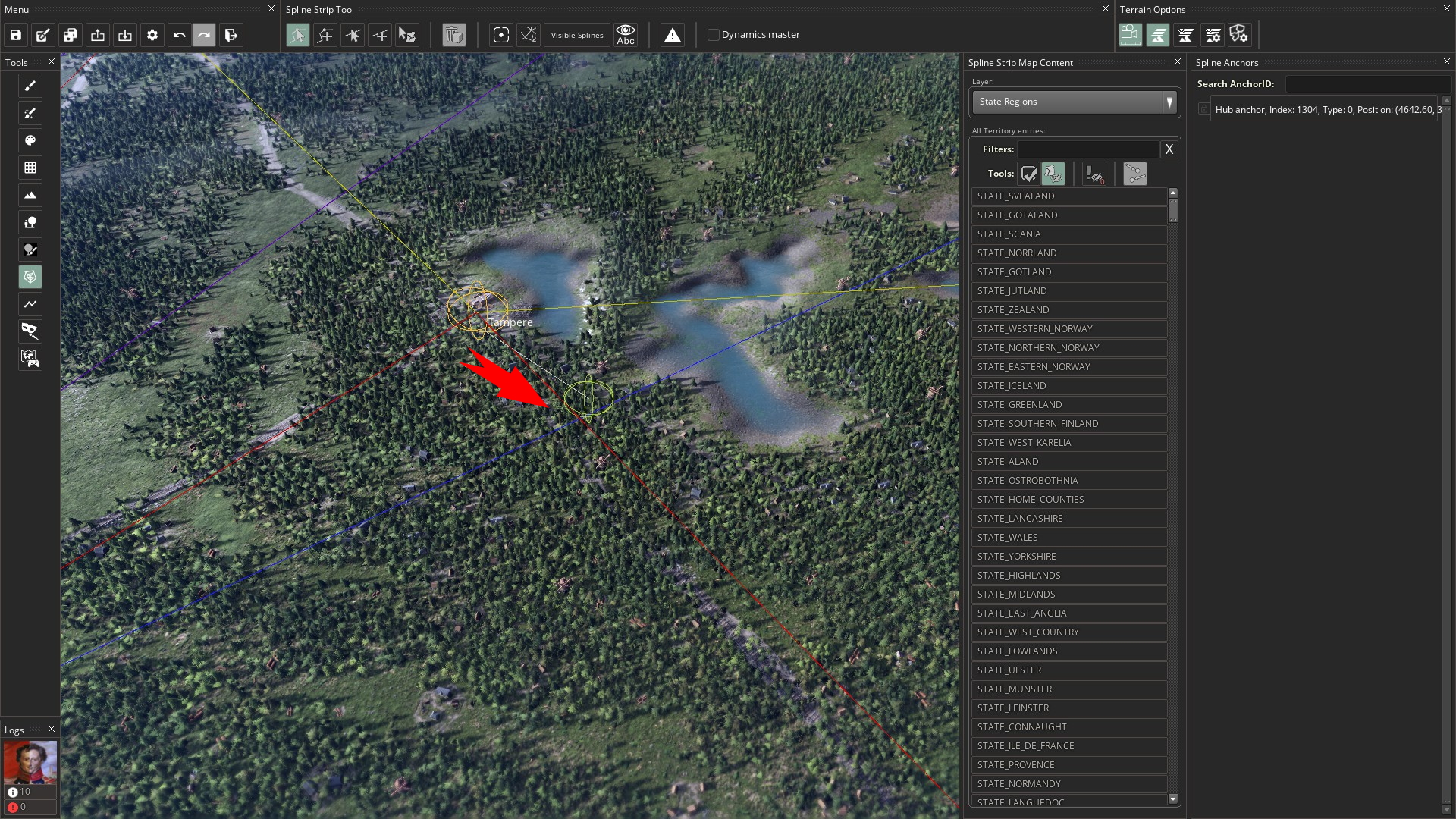 So I’m dragging the hub southeast, and once it’s in a good place I let go, and the game recalculates where the splines (roads) should go. I can adjust those with the Spline Network Adjustment Tool if I want, which is just below the currently-selected tool. 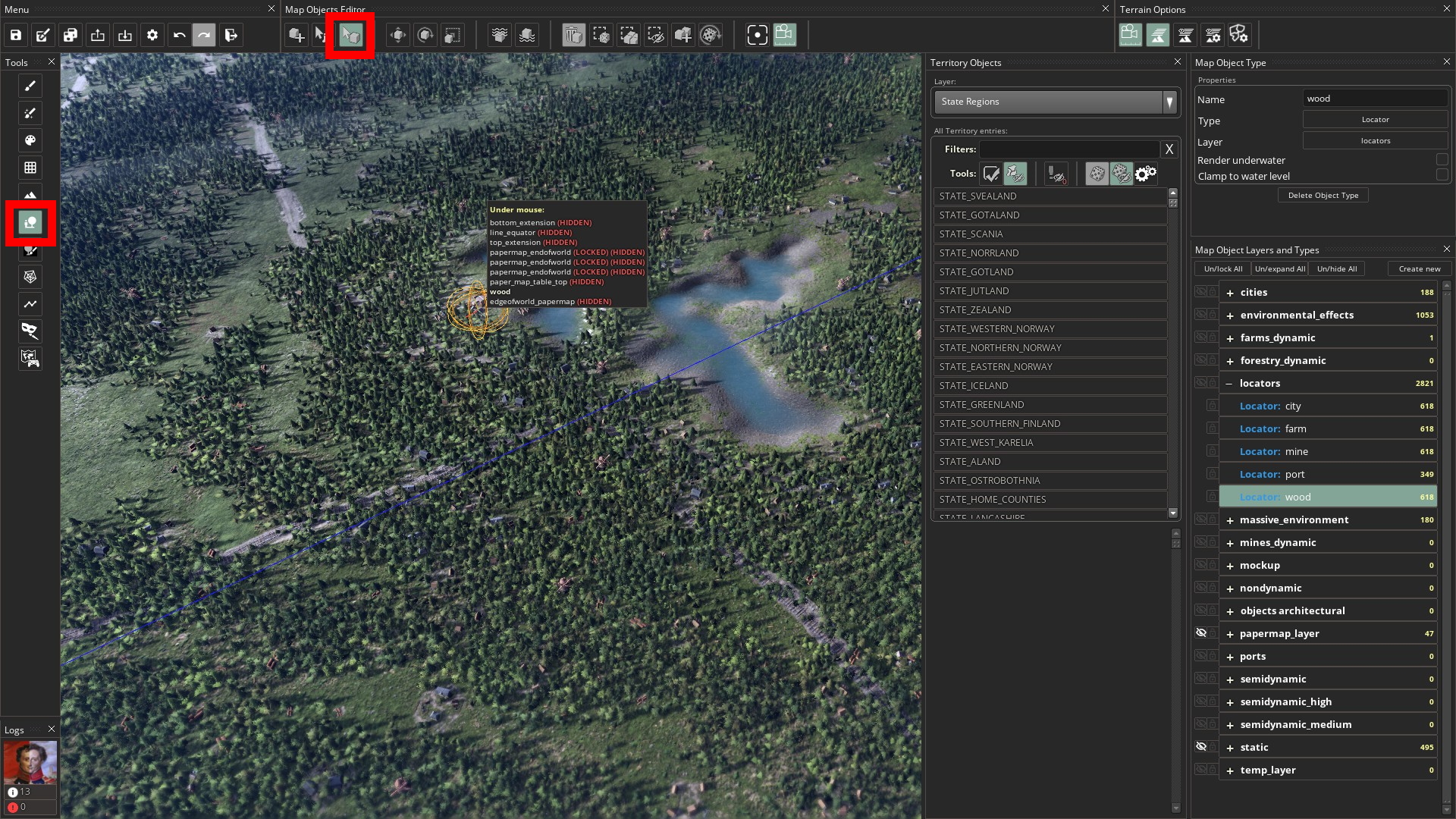 Then choose the Move tool from the top menu (shortcut key W) and drag the sphere to the desired location. If you’re doing more than just one, it’s good practice to switch back to the selection tool immediately by pressing Q and clicking away from the currently selected locator, that way you won’t accidentally drag locators around. 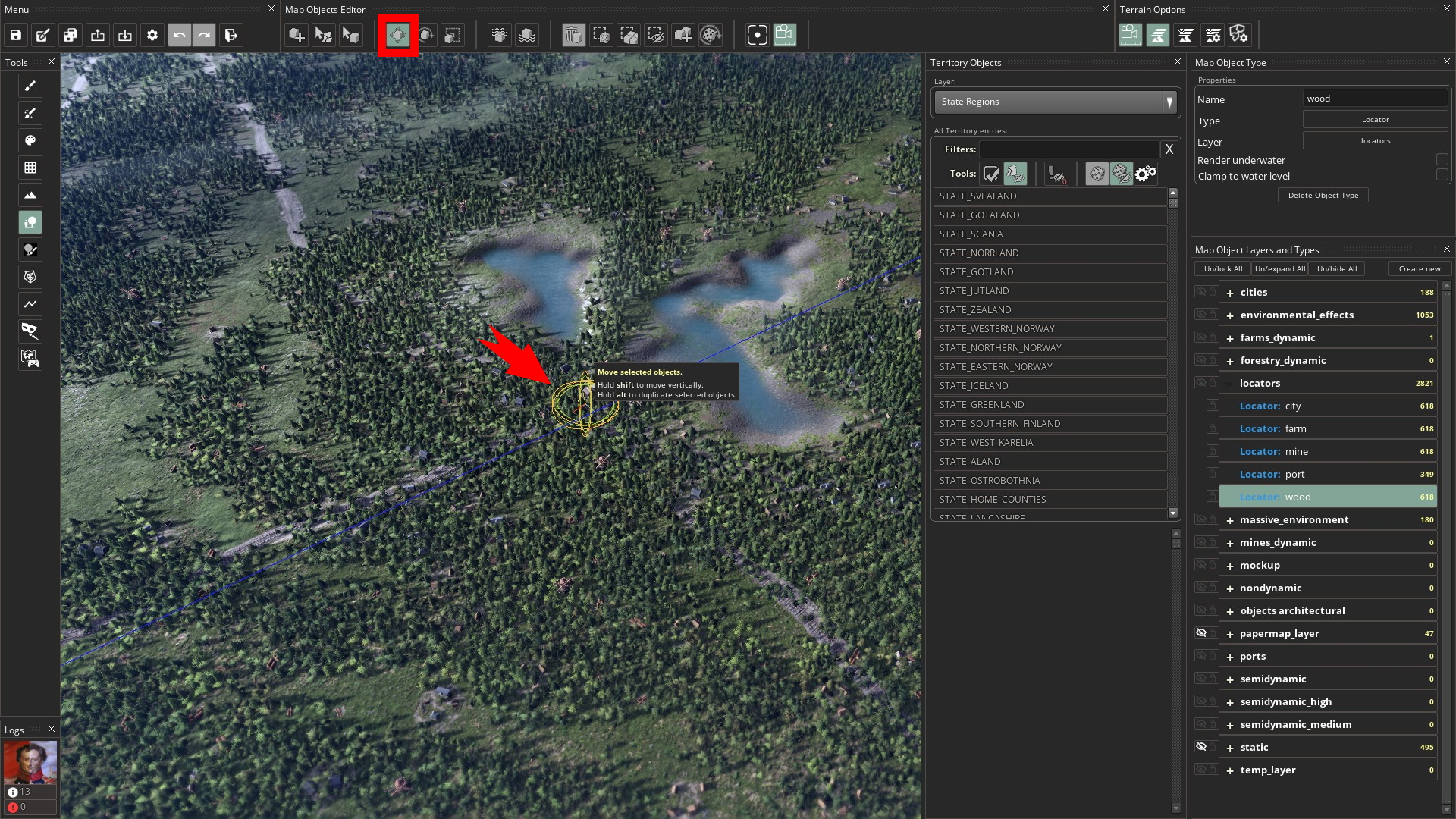 It’s happened before that I accidentally crashed the map editor after having made lots of edits to hubs. It may be annoying to save frequently, but it’s better than losing 10+ minutes of work!

Hit the Save As… button, and make sure that any files that have changed (that have their box ticked), are saving to your mod. 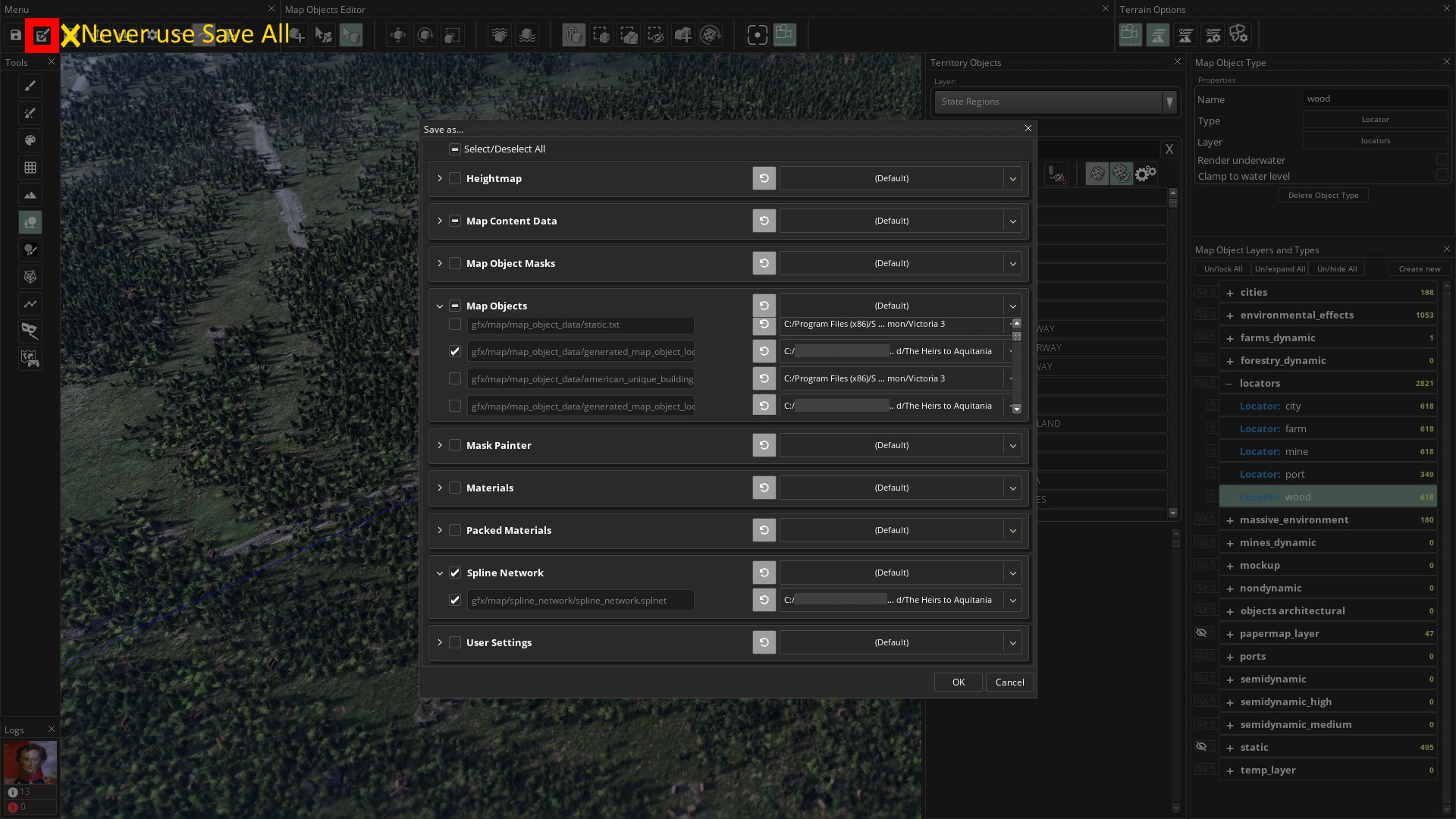 I strongly recommend against hitting the Save All button ever. Just reject it. I once hit it and it took a while to save and overwrote the base game files, so I needed to verify my game cache. It really put a dent in my modding vibe.

Save and save often.

There are some other important things to note that didn’t fit in this example:

Hubs have an ID associated to them, which when you select a hub you can see in the top right of the map editor. The ID is always of the format [State ID #][settlement type]. State IDs are perhaps most easily found in the map_data/state_regions folder. Settlement types are as follows:

With ports you might notice that it in fact has TWO hubs! This second hub always has the ID [State ID#]00, and is different to the city because it’s a Type 1 hub (which tells the game that it’s a sea hub). Thus, although Guangdong’s sea-facing hub’s ID is 49700, because it’s Type 1 instead of the normal Type 0, the game doesn’t confuse it with the city in Guangdong (which is 49700 Type 0).

At the time of writing, I don’t know how to make new Type 1 hubs. If you figure it out, please let me know in the comments!

At its foundation, hubs are intended only to connect splines/strips. For that reason, sometimes locators are not in the exact same location as their hubs. One example is in the Yukon Territory in North America. Deciding to put the locator somewhere different from the hub is a choice of visual design – maybe you want the road/railroad to go somewhere different than the settlement. Maybe you want to represent a settlement that was extremely difficult to reach. Maybe you want to make it easier for roads to reach hard-to-reach places.

After all, splines/strips cannot pass through a third state to connect hubs in different states. Sometimes a hub far from its locator may make it easier to connect disparate states.

Each one has its own colour in the editor, which you can see when you play around with them a bit.

(I may write more here when it comes to mind)