The weapons are quite important for a successful playthrough, since they allow us to hunt down enemies but also protect our trading and mining fleets from hostiles.

Exist several different types of weapons to choose from, that can help us create fun and effective loadouts.

Weapons you can use manually, Turrets, Missiles and Mines.

Weapons you can Use Manually

These are the weapons you will use early in the game and are efficient mostly on small and medium size ships, like fighters.

Ion Blaster : A very effective against shields weapon that is struggling to bring the hull of targets down. A good option if your aim is to capture a ship and not destroy it.

Beam Emitter : A laser weapon that fires a constant beam and deals ok damage against both shields and hull. Its major drawback is the fact that it overheats fast and will have to wait some time to fire again.

Pulse Laser : A very good weapon choice against both shields and the hull of enemies. Pulse laser fires a burst of energy projectiles and can be a great option for many loadouts.

Bolt Repeater : One of the best weapons in-game at the moment. Effective against any defense and easy to use, the Bolt Repeater can tear apart enemies. You can combine it with a weapon like the Ion Blaster for the best results.

Shard Battery : Your shotgun in space option. Deadly from close range and perfect for a more close and personal type of combat.

Plasma Cannon : The deadlier weapon in-game. The Plasma Cannon can destroy targets in moments but is rather hard to use. Because of its slow projectile speed, it is easy to miss your shots. It will take some time to learn how to aim properly and use it effectively. 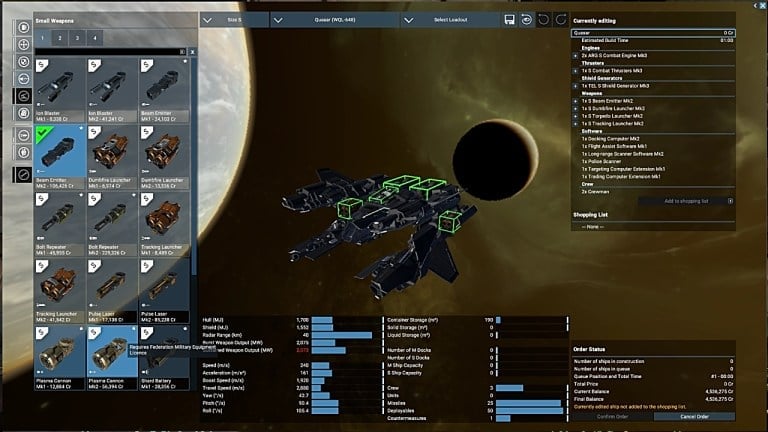 Dumbfire rely on your aim and are harder to use while Tracking and Torpedo lock onto your target.

There are several different types of missiles in-game, perfect for every type of target and encounter. EMP missiles, Cluster, Guided, Heatseeker, Smart, Swarm, Dumbfire and of course Torpedoes.

In general Guided, Heatseeker, Swarm, Smart and Torpedoes have a short range while EMP, Cluster and Dumbfire have a much longer range.

Missiles are best used against the hull of your targets.

All weapon types except the Ion Blaster have a turret equivalent weapon system in-game.

You can control your turrets from your ship’s cockpit. They will be inactive, greyed out, when not in danger but will activate and start firing once you engage your target or are under attack.

There are four main fire modes for turrets. Defend your ship if an enemy starts attacking, attack freely hostiles, shoot down missiles or attack the enemies you are targeting.

There is also a fifth mode, to attack/hit asteroids that applies to mining turrets. 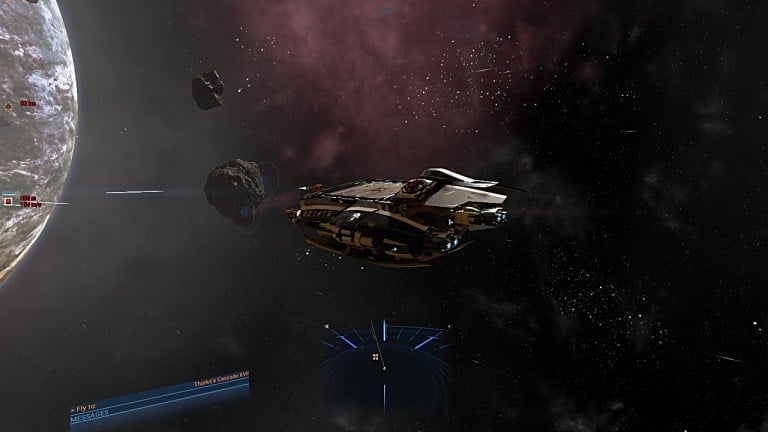 Finally also exist mines. Friend/Foe, Tracking mines and simple mines are the three different types that are available in-game. You can deploy them like any other deployable from your ship interactions menu.

Mines are mainly used to prevent enemies from reaching an area and as an alternative method of static defense.