For this initial mission, you don’t have control over either protagonist. Instead, you’re in King Leonidas’s shoes in the thick of a battle with the Persians.

Similar to Assassin’s Creed Origins, combat in Odyssey is all about timing and strategy. Thankfully, this battle isn’t too hard. Tutorial messages will come up periodically showing which buttons do what.

You can spend plenty of time getting used to the combat system as you’d like, but you want to make your way over to the right of the map. A yellow marker denotes the small overhang you’re looking for. This will throw you into a cutscene and into a battle with a big baddie, Karush. 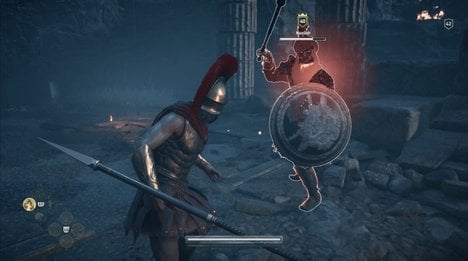 As with the previous are with plenty of enemies, this battle is closed off from the rest of the warfare. Follow the on-screen directions to lock on, and the battle will commence. Time stabs, knock off his guard with a light stab, and go in for the kill. Make sure to dodge Karush turns bright red.

The next section of the game is in the modern day with Origins’ present-day character Layla Hassan. Choose the difficulty (which can be adjusted throughout the game) and what gameplay mode to play in (which you can also change later on). Guided will show objective points, exploration mode will not. Character selection is also in this section.