So, you’ve just landed on some strange planet. The planet’s name is “Terran“, but you don’t have to keep up with that yet. Anyway your base has a landing pad. Look at the terminal and hold “Q”. You will hit the button and confirm it. The startup package should now be on the pad. Unpack the large platform, and put the medium printer on it. Now what you want to print is (ironically) a small printer, a large platform, and a research lab. You will need resources called, “Resin” and “Compound”. There are usually some around your base to start out with. Press “E” to take out your terrain tool to mine them. You should also make a canister (made from resin in your backpack) to hold soil. That is what you use to build terrain from. More info is in the tutorial. Attach the canister to your terrain tool, and you will be set. Once you have all of your base components set up, you should make something called “Tether Bundles”. Tethers are like power lines (or oxygen lines?). They provide you air and energy when attached to your base, and each other. Anyway, you may find yourself broke as a joke in “Bytes”. Bytes are like the currency in ASTRONEER. If you have enough, you will be able to unlock things, such as (in order) things you can make in your pack, with a small printer, with a medium printer, and a vehicle bay. Your main focus now is to find things to research. You can find them by digging up plant life, including enemies! Go into a cave, and try to find some enemies. 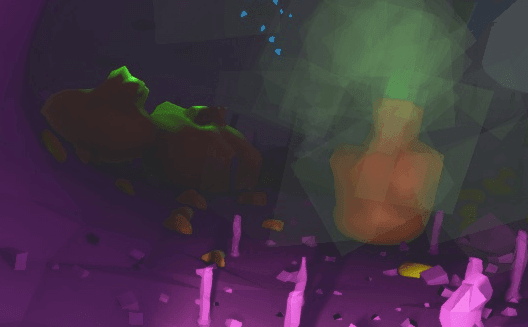 Once you have 250 Bytes, buy a Smelting Furnace. (You might also want to make beacons and work lights) After that, we will move on to the Mid game stage.

Now, we are entering mid game stage. This is the time when you might be facing some metaphorical craters. Such as, running out of storage, direly in need of resources, and possibly power shortages. Let’s solve power shortages first. You can make a bunch of generators, but I wouldn’t. I would hook all of the platforms up to each other, and the base. Then put a generator/solar panel/wind turbine on the holders above the base’s power cords. And problem solved! (For now). Next, since you have a shipload of resources, we will solve the storage issue. First make a Large Platform B. Not a Medium platform B. This will require 3 resin. Then, with your Small Printer, print 4 medium storages, if you can. Place them all on the platform, and you are set! Now you have a 32 item external storage platform. This also keeps them from blowing away in a sandstorm. Now you probably burned your items down just to make these, so it is the perfect time to go caving. To get to all the goodies, you will have to go down to the “green zone”. 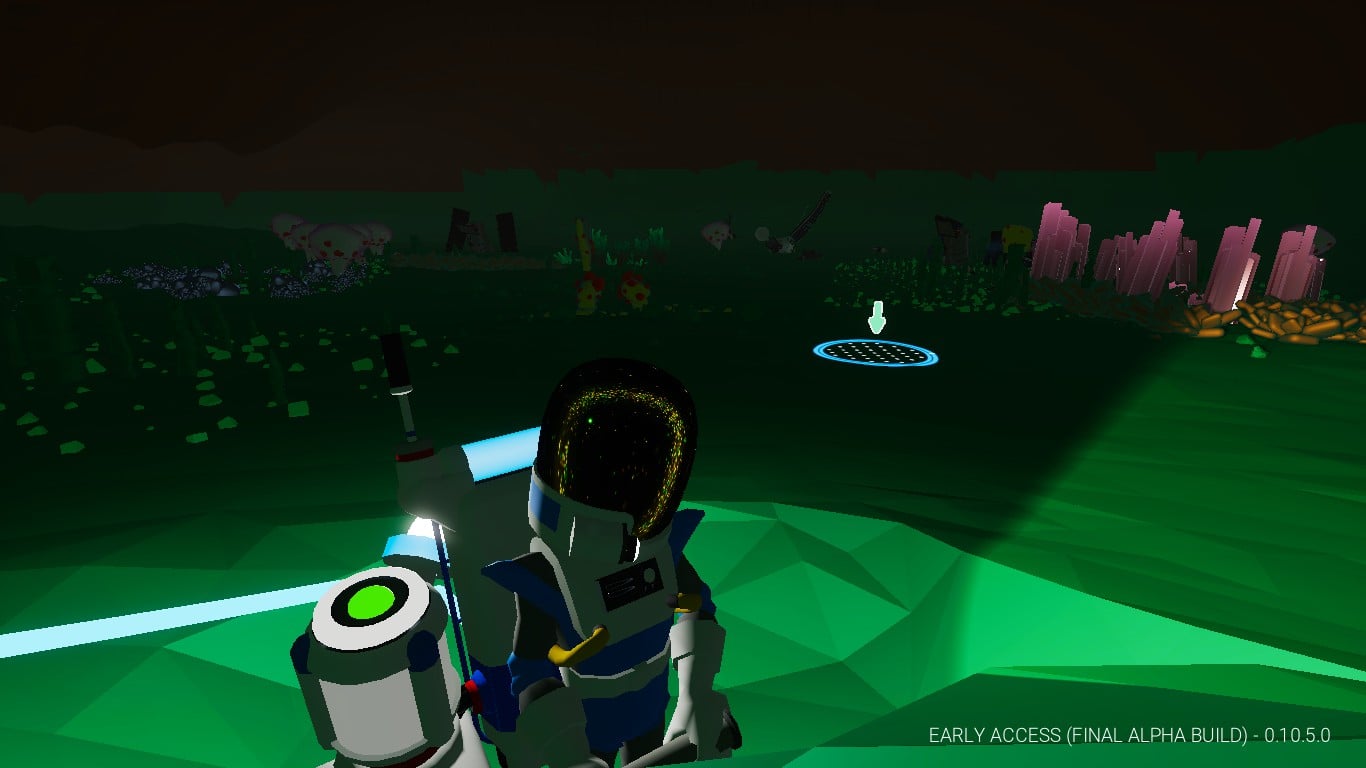 You might find some open holes that already lead down to one…from a great height. Not a problem!
Just dig a very gradual slope, (about to where you can walk up it) and once you hit green, dig sideways towards the direction of the cavern. What you are looking for, is Laterite. Laterite is aluminum ore. Aluminum is in a lot crafting recipes for the next tier. Possibly what you see in your research computer, under the Medium Printer Icon. You will also see that there are these spiky mushrooms around. These are called “Spikers”. 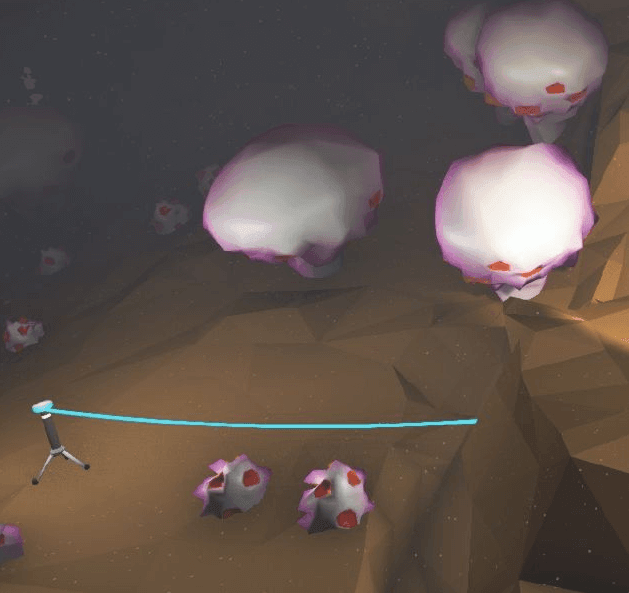 They can be very dangerous, especially if you die next to them, because they make it hard to get to your dead body. Anyway, now you have all these items to safely put away in your storage platform. Finally, we can get to one of the most fun parts of the game. The vehicles. If you don’t have one already, make a Vehicle Bay from 3 compound. Once hooked up to a platform and a power source, if I am right, you will want to smelt 7 Laterite in your smelting furnace. And if you have some more, you can make a buggy/rover later! Now, build a small shuttle. But why not a buggy you ask? Because a shuttle will make your life easier for now. Now make 2 solid fuel thrusters. Why 2? The solid fuel thruster is a consumable. It has a one time use for a trip to a planet. So if you leave with one, you will be stranded on another planet…forever. Anyway once you have your seat in, and you have a complete shuttle, you will need to prepare before you go, Eager Mc Beaver.

Tethers: 3 or 4 tether bundles will do.
Packed Thruster: Of course!
Generator: Just one
Organic: Optional
Packed Medium platform A: What?
Some Free Space: Obviously.
Now you have all that in your backpack. Good Luck!

You should know the drill by now. It is time to go exploring! Once you blast off, you will start circling around your home planet, Terran. This is actually the landing sequence. To leave orbit, press Z or X. This will activate a planet selection sequence that reminds me of the “Mario Galaxy” galaxy selection for some reason. The planets in the final alpha build are Terran, Barren (Terran’s moon), Exotic, Arid, Radiated, and Tundra. Each planet has a different setting. Terran, is like Earth. It is the safest place you have in the solar system. Barren, reminds me of Mars. It’s an orange moon with lots of wide open dunes. The days and nights pass fast (It’s a moon after all), so solar panels work best here. Exotic, reminds me of a planet on Metroid Prime. It has dangerous flora that you would find in caves, on the surface! Arid, is pretty much a desert. It even has tumbleweeds that hurt you. Radiated reminds me of Fallout. The atmosphere is a greenish color, and it has creepy inhabitants called “worms”. And they are not fun to die from. And Tundra always reminds me of a scene on the movie, “Madagascar”, when the penguins make it to Antarctica.
Even if the planets sound like they have no point in landing on, they actually have great materials there. Some that you can’t even find on Terran. Sadly, if you are on a multiplayer server, you might already have some pranks in mind involving some of the planets’ settings. But they are going to have to wait. I would recommend landing on the moon, Barren. Beware, Barren has a higher difficulty setting, than Terran. This is because they want to keep you engaged, instead of your usual hum drum plans. Now, when you land on Barren, go ahead and remove your used thruster, and replace it with the fresh one in your backpack. Why did we have to come here first? Because Laterite is more common here. In fact you might even find some on the surface! Grab as much as you can. Also, what you want to look out for, is a rare resource, called Wolframite. Wolframite is another ore, the ore of Tungsten. Sound familiar? What you might have seen in the computer, are base components that require Tungsten, and something called Tungsten Carbide. Tungsten Carbide is a fusion resource. This is where it gets interesting. You can fuse certain materials in a Chemistry Lab, to form a new man made material. For example:

Once you think you are set, you can return home to Terran. But before you do, place a Beacon down next to where you land on a new planet. This will help you keep track of where you have been. You could also place beacons on you, or your car. So if you die, you can find them easily.