The No Redeeming Qualities 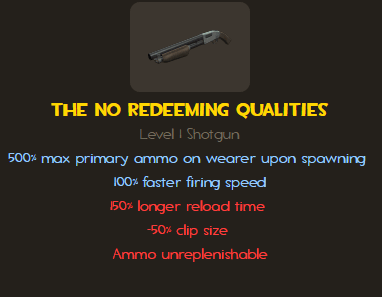 This name is a reference to Jack5, a TF2ber who is known for strictly adhering to a certain set of weapons and ignoring positive attributes of other weapons. This weapon was intended to mimic his oppositions to the “Pomson 6000” while furthur going along with its usage in Zombie Survival. This weapon is intended to be used when you find yourself unable to build a dispenser, but still need to be able to attack zombies outside of your melee range. 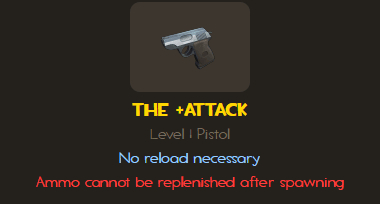 This name is a reference to the console command +attack , which forces you to continously fire until the tied command -attack is used. As the name implies, this weapon is used for when you are “strongly defending”, a high-risk/high-reward weapon, that allows you to obliterate medics with little to no problem, but you must stand on top of your dispenser to continously fire, and can be killed with only one hit. There is also little to no ammo, requiring you to use a dispenser.

The Hit and Run 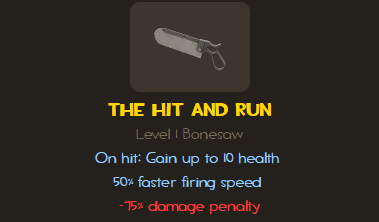 This name is a reference to both the “Hit-And-Run” traffic crime, and its playstyle. When low on health, hitting an engineer for health, and running away to ensure you don’t lose that health. This ability can be used at any time and will rapidly heal your health, in exchange for doing less overall damage. 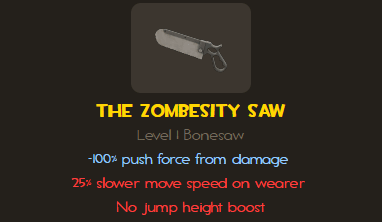 This name is a reference to the fact that the gameplay of this weapon is similar to the effects of its user suffering from Obesity, being that they will move quite slowly and not be able to jump very high (making this user unable to hit Engineers in high places), however, being completely unaffected by knockback. This is quite useful when Engineers are “turtling” in one place, and it being nearly impossible to even get close to them due to the immense amount of Shotgun or Pistol usage.