The ingame character set has not been deciphered yet, but when we collectively figure it out I’ll update the guide. Included is community character sets and a guide to understanding how the language functions. I’m quite impatient too and want to crack the game’s character set to understand, but it’ll take us all a while. 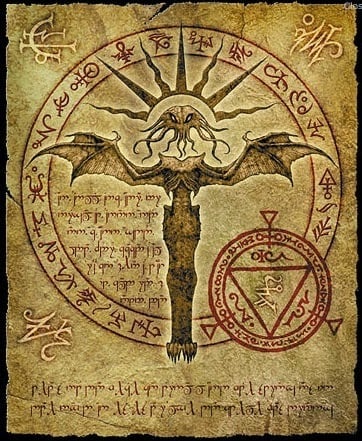 The works of horror writer H.P. Lovecraft and his proteges, collectively known as the “Cthulhu Mythos,” often contain fragments of an alien language. HPL himself never gave this language a name, but fan consensus has settled on “R’lyehian” or “Cthuvian”, for the purposes of this article we will focus on the former.

HPL also provided translations of several fragments. Intrigued, I set out to learn more about R’lyehian, woefully unprepared for the sanity-blasting ordeal I faced. Fortune smiled, however, and the small lexicon below is the fruit of my efforts. For more information about the Mythos, please visit the newsgroup alt.horror.cthulhu, or search for “Cthulhu Mythos” on the Web. You’ll find more and better information than I can provide here.

A Note about Grammar: Unlike Earthly languages, R’lyehian makes no distinction between nouns, verbs, adjectives, and other parts of speech. Pronouns may or may not appear. Verbs have only two tenses: present and not-present, since the Old Ones experience time in a non-linear fashion. Taken out of context, any fragment’s translation is nothing more than guesswork. 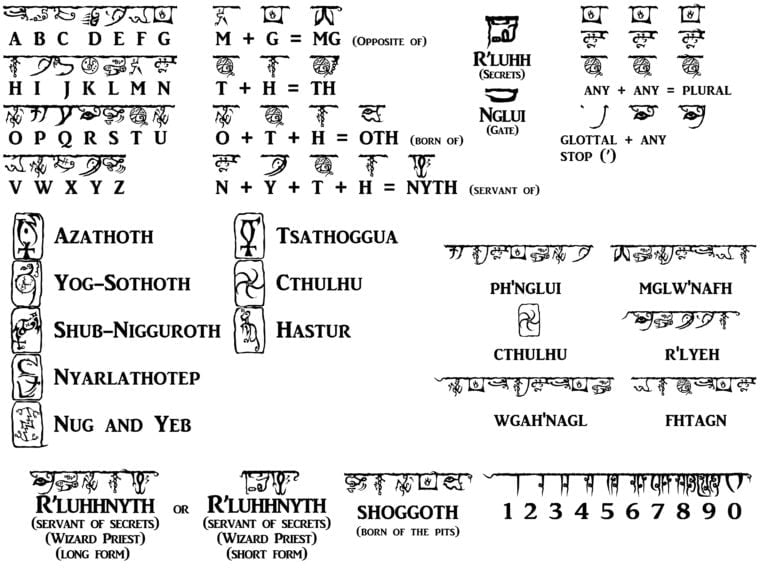 The best-known R’lyehian fragment comes from HPL’s story, “The Call of Cthulhu”:

HPL translates this as:

Using this dictionary, however, a more literal translation is:

Today’s offering is a pair of fragments from Bloch’s “The Unspeakable Betrothal,” and some intriguing implications of these. Both start in English and finish in R’lyehian. You’d think, with an English lead-in, such fragments would be easier to translate, but noooo:

We already know Yuggoth is the planet Pluto. Ulnagr might be a preposition, except that R’lyehian doesn’t seem to have any free-standing prepositions – they’re mostly implied. Suppose, then, that agr sounds a lot like -agl, a suffix which denotes a location. The girl is being summoned, so uln is a verb for call or summon. Farnomi might be a location, or an entity, or a group of entities, on Yuggoth. Assuming it’s the entity to whom the girl will be taken, we can guess that ilyaa means expecting or awaiting. So this phrase might be translated to:

And the other fragment:

Here’s uln again (sort of), but now it’s not a place but a time. That means ch’ is also a verb, and the other action involved is travelling to Yuggoth, so ch’ means travel. Shaggor sounds like a cross between lloigor and shoggoth, so let’s run with this. Shagg is different from shogg. The girl is attacked through her dreams, so let’s say shagg refers to the Dreamlands. A shaggor is not an inhabitant of the Dreamlands (that would be shaggoth) so it’s more like an aspect of some force, or a manifestation. Finally the suffix -nyth could mean servitor of. So a shaggornyth is a servant of a dream force – I nominate the Nightgaunts. And the translation:

We’ve already defined shoggoth as inhabitant of the pit. The suffix -oth indicates a native of some place or realm. We can extend this to Azathoth, and define Azath as the realm of nuclear chaos. At the moment, though, I can’t define Yog-Soth. The suffix -or tells us that lloig means mind or psyche, since the lloigor are mental constructs. These names give us some insight into the cosmology of the Great Old Ones. There are separate words for the world below (shogg), the world of dreams (shagg), and the world of the mind (lloig), and no doubt others will appear. They can operate in any of these worlds at will. Even though their physical bodies are imprisoned, they can influence their servants (and psychically sensitive people) through mental sendings and dreams.

A minor note: plurals in R’lyehian are usually formed by repeating the final letter. Hence, gof’n means child, while gof’nn means children. It makes a twisted kind of sense… so it’s probably wrong. To get caught up, we need a new definition of mglw’nafh to decipher the famous phrase in “The Call of Cthulhu”. We propose keeping the original assumption that mg- is a prefix denoting a juxtaposition of opposites, like sino in Spanish. Suppose we call lw’nafh a verb meaning lives or acts. The revised translation is then:

We are now ready to tackle a phrase from Derleth’s “The Return of Hastur”:

In this case, we need to guess at the meaning of this phrase before tackling individual words. Suppose it means something like this: “Hosanna, Hastur, we offer up our prayers to thee, we beseech thee with prayers.” Iä doesn’t really require translation, but it seems to have the same function as Hosanna (Aramaic for glory, right?). We’ve already seen a pronoun represented as a prefix (y-, see above), so we’ll say that the prefix ‘c- denotes the first person plural, i.e. we or our. For reasons which will shortly become apparent, this prefix softens a following consonant, so the root verb is fhayak, meaning send or offer up or place before. Vulgtm thus means prayer (plural here, denoted by the second “m”). We’ve guessed that vugtlagln means beseech or respond to, so, a more literal translation is:

The final fragment from “The Return of Hastur” is:

Here again we see the prefix c-, which reverses the normal sense of this verb:

We can now turn to other fragments with some confidence. From Price’s “Beneath the Tombstone”, we have:

We can handily translate it as:

Or this, from Carter’s “Dead of Night”:

Glossing over some typos, we have: