You begin Disco Elysium in primal darkness, in conversation with your ancient reptilian brain. This establishes its central idea: having discussions with various aspects of yourself as much as you will the various characters you meet. Once you talk yourself up enough, you wake up facedown after what was clearly a wild bender. A row of drinking long and strong enough that you don’t remember anything about your life.

You’re a cop in the science-fiction themed world of Revachol. The town stands on its own, with a look that’s not quite super futuristic with flying cars, nor quite steampunk or clockpunk. It’s a world dealing with the aftermath of a past war, where tensions are high across class, moral, and social lines. You, missing your name, home address, and even the basic understanding of your personality, are thrown in the middle of this, solving a murder in the wrong part of town during a labor dispute. From there, your journey spirals out of control, growing bigger and more complex the deeper you dig. It reminds me a great deal of the fantastic Planescape: Torment.

Disco Elysium is an RPG, so when you start the game, you’re given three archetypes to ease you in. You can choose one of the three, but I recommend that you create your own, choosing to distribute points between four stats: Intellect, Psyche, Physique, and Motorics. These stats improve various lines of skills, like Reaction Speed, Logic, or Suggestion. Drop more points in Psyche, and you’ll be better at understanding yourself and others, giving you improved skills like Empathy or Authority.

Like any RPG, certain situations in the game will check where your skills lie. This is done via dice rolls: White Checks that are repeatable, and Red Checks you only get one shot at. I was low on Intellect in my run through, meaning my Logic skill was low enough that I frequently had trouble connecting the dots or figuring out clues. In contrast, my Physique was pretty good, so my Half Light skill meant I was more likely to respond with a clever retort to denigrating comments. This is all pretty standard.

Then Disco Elysium starts to break away from standard RPGs. Skills aren’t just passive ideas that underpin a system. Your skills will talk in the middle of conversations, offing their own takes of various events as if they’re characters standing alongside you. You might be speaking to a fellow officer and the Espirit de Corps skill will chime in with its feelings on them. Volition is there to talk you up, drive you to be brave and take chances. The Composure skill keeps you together in a tense situation. They each have personalities that you’ll come to understand, like Inland Empire (an indicator of your imagination) being an annoying poet or Drama being a washed up actor. The skill system is like having 24 different party members with you at all times, who each offer their own counsel when they feel its appropriate.

There are physical actions in Disco Elysium, but it’s not necessarily combat. Action works with the same systems as dialog, and your lifespan is indicated by Health and Morale. Health drops when you get attacked or do something physically dumb, while Morale drops when someone hits you with a good insult, or you have a negative realization about yourself. Early on, I was speaking to a little girl about what I do for a living, and I picked a self-deprecating answer on a whim. My Morale took an instant hit, and the sarcastic comment hit home a little too hard. Drop your health to zero and you die; drop your morale to zero and you give up on life.

Finally, there’s your Thought Cabinet, which is Disco Elysium’s lip service to the ideas that roll around in your head before coalescing into something important. These concepts come to you as you play the game and you choose to internalize them or not. Internalizing them takes time and once they’re a part of you, you get either bonuses or drawbacks to your character. It’s not just the bonuses that matter though: internalizing these ideas become a part of your personality. One thought, Some Kind of Superstar, gave me bonuses to skills like Suggestions and Composure, but also docked my Logic and made me kind of a prima donna. (You can forget thoughts you’ve internalized, but it takes time, as a reverse of learning it.)

Together with your unseen partners and your choices, you’ll slowly figure out who you are and were. Disco Elysium proudly calls itself a detective RPG, and it’s one of the best whodunit games I’ve played in a long time. I’m a sucker for solving a good mystery, and the one at the one of heart of Disco Elysium doesn’t disappoint. Together your choices, skills, and dice rolls forge your path through the case. Failed rolls are speed bumps, not concrete walls, so you never really feel like you hurt yourself by making a choice. Your story is ultimately your story, and part of the magic with Elysium will be talking with other players and hearing where their stories went.

Yesterday, I was talking with fellow reviewer Dominic Tarason about Disco Elysium on Twitter. He mentioned that you can die in the first room of the game trying to retrieve your tie, but I never even realized that there was a tie to pick up. As a tie aficionado, I lamented this missed opportunity, only for Dominic to acknowledge that, “The tie is its whole own character. The tie is an asshole.” The tie, apparently, constantly prods you to do drugs and drinks alcohol, and I missed it entirely.

Disco Elysium relies heavily on text, leaning pretty close to visual novel in its composition. The writing is largely fantastic, with great, nuanced characters, even if it occasionally feels a little too smart or heady. Sometimes it has that Quentin Tarantino vibe, where it rides off into its own tangents on a specific topic like communism, capitalism, war, or religion. But that doesn’t detract from the main story overall, and you more often than not want to seek out new folks to talk to. The voice acting isn’t as up to snuff though, with the recordings often sounding tinny and canned overall. It’s a shame, because otherwise the sound of Disco Elysium is pretty good. But when your game is based heavily around dialog and the delivery of that dialog isn’t great, it does hurt the experience a bit. 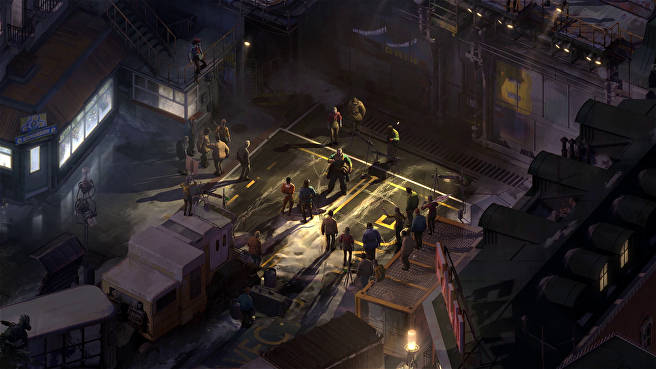 On the other hand, the visual verve of Disco Elysium is pure greatness. It’s presented in an isometric viewpoint like many of the old Infinity Engine games, but everything is slathered in this wonderful aesthetic. It’s like an impressionistic oil painting, while at the same time the world itself is full of tiny details. You see the massive number of footprints underneath the body that kicks off the crime scene, showing that the local populace has no doubt messed with the scene. You feel the decay in the world; the craters left behind by war, the walls and bridges with visible cracks, the bone-deep tiredness of the citizens standing around in each region. Every screenshot looks great in Disco Elysium.

I do wish Disco Elysium was a shorter game though. You’re talking probably 40-50 hours of play for a full run through, but it’s also the kind of game that you want to play over and over, because your skills and choices offer drastically different experiences.

Disco Elysium definitely builds itself on the foundation of games like Planescape: Torment or Fallout. It drops on the RPG combat of those titles for more heady thoughts on ideas and concepts, and how they come together to make up who you are as a person. It’s wholly unique. It’s like sitting down thinking you’re going to have a quiet dinner, only to be joined by haughty philosophy professor ten drinks deep with no concept of personal space. It might not be for everyone, but it’s memorable. 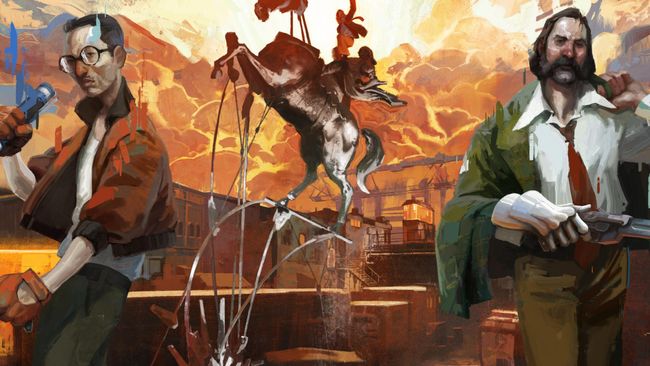