A colonizing ship can be the first step to take over a system. The best way to do that is to choose friendly planets as your targets. White circles under system names can suggest you which planets can be inhabited. 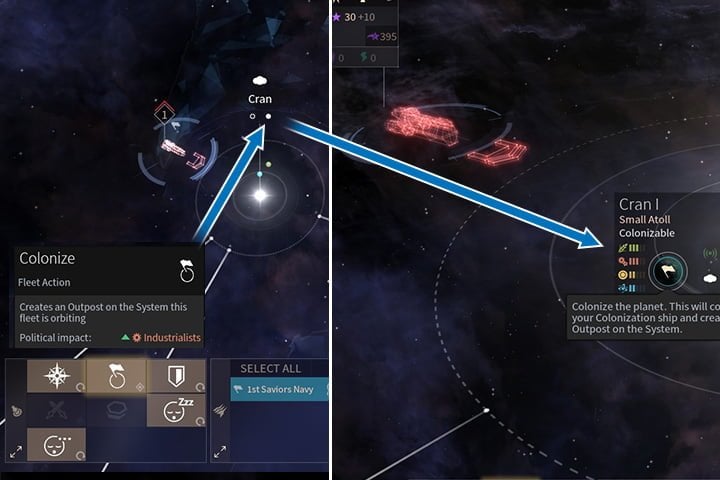 Colonizing new systems and planets is one of the most important goals in the game. Thanks to expanding your living space and territory you can increase your population and inflow of resources which in turn can increase your realm and chance to win. To obtain this goal you must use colonizing ships. Remember to select systems with very good planets or a lot of average ones. Oceanic planets or with a lot of flora are wanted by all races so it doesn’t matter which faction you play as because you must choose those planets as your priority targets during the expansion. They also give Approval bonuses which is also useful. With the development of technologies you get opportunities to inhabit more planets and even reshape them into something more favorable. You can also help Ecologists in your empire. If they are in power you can colonize almost all planets although with a penalty to FIDSI productions.

In the beginning of the game you start with one ship of that type but there is nothing stopping you from building more. Especially because building colonizing ships doesn’t require population unit (unlike in the previous Endless Space game)! The colonization has two steps.

First, you must find an empty system (one that is not under influence of other player) with planets that can be colonized. Such planets are marked in the game screen as white full circles (miniature planets) under a system’s name. When you bring your colonizing ship to a wanted place you can click Colonize option. That ship is used in the process of constructing an outpost which is the first step to settle in that system. 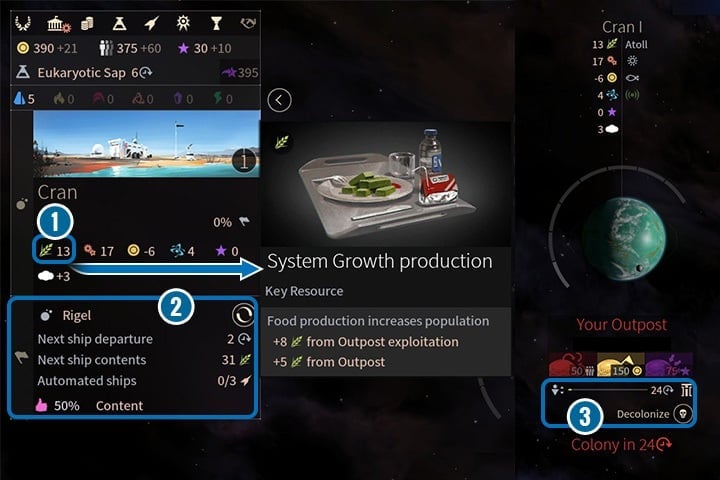 Getting colony status takes some time.
The second stage is to develop your outpost. Although a given planet is under your control, its system is still neutral. If there are other planets that belongs to no one, other players can colonize them. This is where a race begins – who can develop their outpost first gets the entire system. An outpost develops on its own. It creates the first population unit by gathering a certain amount of Food that it produces by itself (1) (base production of a given planet plus production of an outpost). Civilian ships with Food, that can speed up that process (2), will start flying on this planet. They start from your capital or system that you chose. But you must remember that those ships are defenseless against pirates and fleets from enemy nations. When you select that system then under a planet’s name you can see three options and a bar that shows how much time is left to get the first population unit (3). Next to it you can see an icon of a population that will appear there. Usually, it will be a population of your faction. 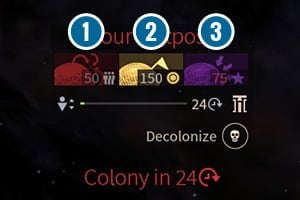 However, you can help your colony. You have the following options:

(1) The first is useful when in a system there is an outpost that belongs to other civilization. By using a little bit of Manpower you can take Food from other outposts.

(2) You can also fund the development of a colony and increase Food production rate by 100%.

(3) The last option is to increase system’s attractiveness. By doing that more people will be encouraged to arrive in a new world.

Most of the times you are going to use the second and third option. Funding Food production is the most useful in distant worlds where ships with migrants have to travel a long way. The second is perfect for systems near your empire because thanks to that you can take over a system in a very short time. When you get your first population unit in an outpost that system becomes part of your empire and from now on you can manage it just like any other colony.