Some ships have assigned roles that have impact on how they behave during a battle. 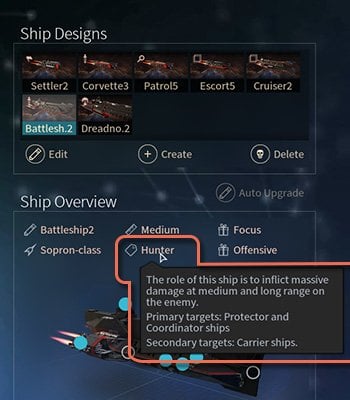 Each ship has an assigned role that makes them attack particular ships in a certain order. Additionally, ships can be broken down by their size: small, medium and big. Bigger ships have more health points, they also need strategic resources to build them, even without special modules. Size indicates the number of modules and their multiplier. Module slots in medium ships are counted twofold and in the big ships some slots are counted fourfold. For example: a laser turret that deals 5 damage in a small ship’s module can deal 10 damage in a medium and 20 in a big ship. Because of that, despite of having less module slots, the firepower is bigger. A similar situation is with defense modules and some support ones. The same goes for production costs and required strategic resources.

Classification of ships based on their roles:

Some of the types can be upgraded to have a few additional module slots. Developing technologies allows you to increase the number of new weapon, defense or support modules although you have to spend more Industry points and strategic resources. It is an expensive process but you don’t have to use all unlocked slots. It is wise to use this option if you have a lot of resources or you want a specialized ship, e.g. for sieges, with modules that increase speed or can repair the entire fleet.

Arks: Vodyani’s special unit that serves as a mobile city. The process of constructing them is a little bit more demanding. They use a special currency called Essence to produce those units. However, what is important to you is that they use 8 Command Points, have a lot of health points and module slots. You can also find a few special modules that can only be installed in this ship.

Hero ships: Their looks and number of modules depends on hero’s class. Some have more slots for support modules, other have almost only weapon modules while some of them offers you a smaller, although more universal, space for modules. If a hero is assigned to a fleet then their ship travels with the entire group but it doesn’t use Command Points. This means that you can use their unit even if your fleet is full or you can create a fleet that consists of only heroes and their flagships. Remember that if you disband a fleet with a hero then said hero is treated as expelled which means that you must wait a certain amount of turns before you can assign them again.