Fallout 76 XP grinding almost seems essential for anyone who wants to level up at a decent pace. This is because quests provide players with a surprisingly low amount of XP. Events can return a decent amount and can appear nearby, but even then they aren’t particularly rewarding. As a result, grinding levels in Fallout 76 is generally the best way to go.

In Fallout 76, it is perhaps more efficient to exploit respawn patterns than to spend long hours trudging through tedious questlines for little to no reward. There are some locations in Appalachia that are perfectly suited to this kind of XP grinding, as the regular respawn rates of powerful but manageable enemies can yield seriously significant amounts of XP in very short amounts of time. Also, the very nature of rinsing and repeating this technique heightens your chances of encountering legendary enemies, which provide unique and powerful loot on top of the fact that you gain tons of XP from defeating them. If you commit to Fallout 76

To the right of Uncanny Caverns, you’ll find Lewisburg. These locations can be found next to the part of the map that looks like it’s covered in soot, shown below. 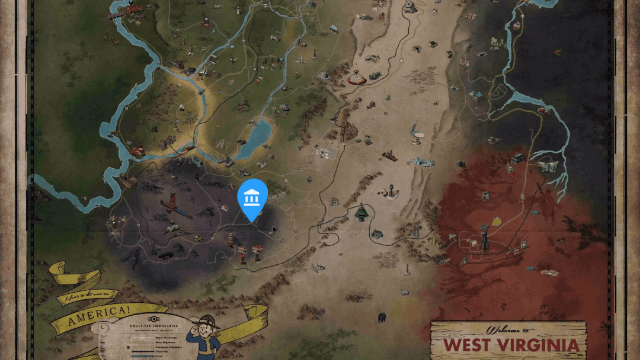 The above area is home to a plethora of Super Mutants who sport valuable gear and respawn at a ridiculous rate. You can come here with a group, or on your own if you’re brave enough, and clear out the Super Mutants in one fell swoop. If you leave for a few minutes and then come back, they should have all respawned, allowing you to get Super Mutant XP over and over again. This is a fantastic way to exploit Fallout 76 XP grinding and will likely see you gain levels at a much more rapid rate than you would if you were doing quests.

If you set up a camp nearby, you’ll also have access to your stash box, meaning that you can rotate power armor kits if you got the fusion cores to spare. Consult our Fallout 76 power armor locations guide and Fallout 76 fusion cores guide if you’re stuck here, as having several sets of power armor will make this ordeal far quicker and immeasurably easier for you. Also, having a bed nearby is obviously advantageous—just make sure your camp is set up in a safe place so that you can actually use it effectively.

So, there you have it! Earning XP from quests in Fallout 76 isn’t quite enough if you’re interested in gaining levels rapidly. Events are a little better, but you’ll still level up at a relatively sluggish pace. With some players playing since beta and other players playing a lot more than you, it may seem difficult to keep up. However, the above guide on Fallout 76 XP grinding should instruct you on how to level up in no time.