Into The Fire Summary

This main quest focuses on you joining the “Fire Breathers”. To join them you need to pass a physical test along with completing other objectives. This quest will take you to Charleston Fire Department, Charleston, Charleston Herald, and Belching Betty.

Pass The Exam
Make your way to the Charleston Fire Department which is located SOutheast of the AVR Medical Center. However, in order to enter their ranks, you need to pass the Fire Breather Knowledge Exam.

The test itself is very simple but, if you don’t want to take any change then you can grab the answer key from the main office above. Or you can just read the marked notes scattered about.

When you are ready, it is time to take the test. Use the Fire Breather Training system terminals and select the Knowledge Exam entry. Once the exam is complete, you will leave the department and make your way to the North.

Physical Exam
Now you need to get to the terminal in the Charleston Herald. Keep to the outskirts of the town and you will notice the stairs on the building near your objective.

Once the physical exam begins, hit Button A and run to the south side of Charleston Heral and hit Button B. Then run back to hit the Button A. You have to do it within a 3-minute limit and while avoiding the scorched.

Once you hit the Button B you need to head around the outside of the city and reach the stairs that you took to get to inside the building while going to the terminal.

As you reach the stairs just follow the path that you took to the terminal and you will make it out.

The Final Exam
For the final exam, you need to get to Belching Betty. As you get there, pick up your gear and get ready. Now listen to the Final Exam Briefing Holotape in your inventory then suit up and enter the mine.

Once inside the mine, use the terminal to the right of the locked door and unlock it. Follow the path and you will come across a Fork in the road. You can take either of the paths as both lead to your destination and both have resistance along the way.

Once you push the emergency beacon fight your way to the surface and talk to Bernie. Go back to Charleston Fire Department and register yourself in the Fire Breather’s computer system.

Now go to the room next to the terminal on the second floor and press the button to play the priority message to complete the quest.

Into The Fire Walkthrough

The following page contains walkthrough for the seventh main quest in Fallout 76. Into the Fire mission activates automatically after entering the Charleston Fire Department, but only if you completed An Ounce of Prevention quest. This mission allows you to join the Fire Breathers. 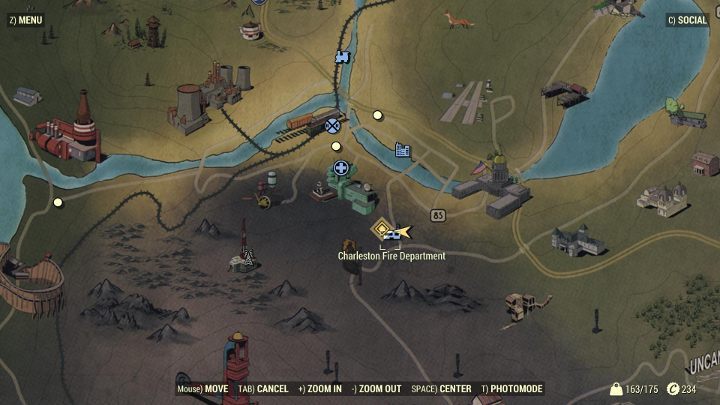 Charleston Fire Department is located near the AVR Medical Center, so you can go there right after finishing the An Ounce of Prevention quest. Reach the place and come inside – Protectrons here are friendly, but other opponents can spawn nearby. 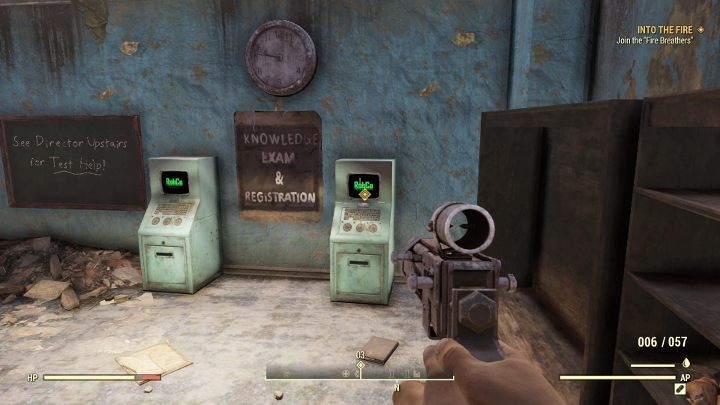 In the building, find a computer and then choose the option to take the test. You’ll be asked seven question regarding safety. In the fire department’s building, you can search for notes which will help you pass – however, you’ll find all the answers below:

After giving the answers listed above, you’ll pass with a perfect score and get the next objective. 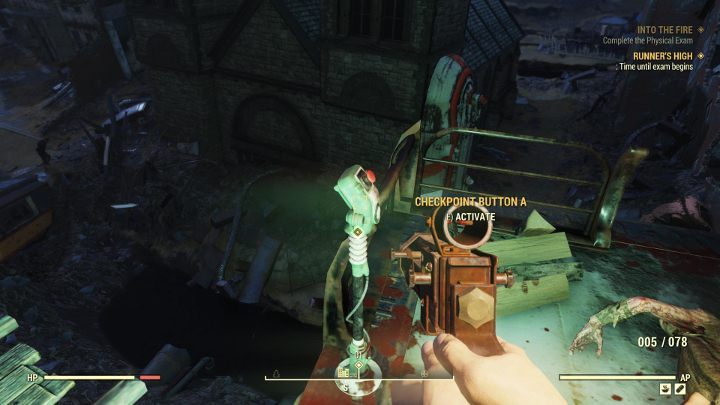 Now, your objective is to pass the physical exam. You have to run from point A to B and back. First, go to a point which is marked on your map. Use the computer and take the physical exam – you’ve got 3 minutes to complete it. Then, take the following steps:

If you can’t pass because of the enemies, try killing them before starting the exam. If you quickly take the test after killing them, they shouldn’t be able to respawn. 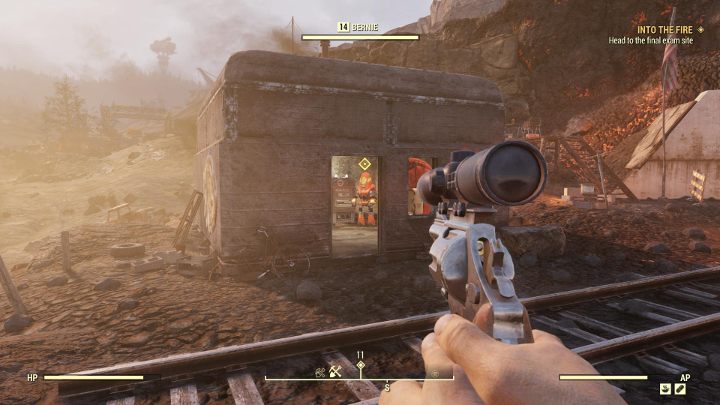 After completing the physical exam, you still have to take the final exam – your task is to trigger an alarm in a dangerous mine. Go to the place marked on your map. Talk to a Protectron named Bernie. You’ll receive a Fire Breather Kit Ticket – use it on the nearby dispenser. You’ll get a firefighter outfit and a holotape – put the new clothes on and play it. You can now go to the mine. It’s located nearby and will be marked as the objective of the mission.

#Tip – Next to Bernie, you should find a Power Armor – if it’s not there, try to leave and re-enter the game to get to another server. In this quest, the Power Armor is very useful, because many opponents will be waiting for you in the middle of the mine. 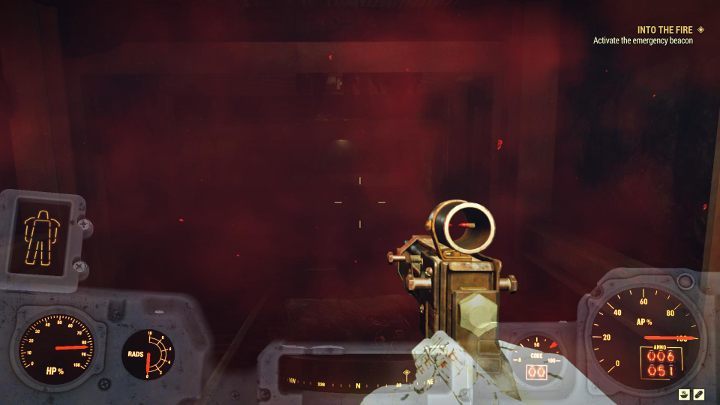 Inside, you have to open the door using the terminal – it’s not secured, so just select the option to unlock the door. Go to the burning tunnel. Avoid the fire (when you touch it, you’ll receive damage) and follow the path. You’ll meet a lot of Scorched on the way. 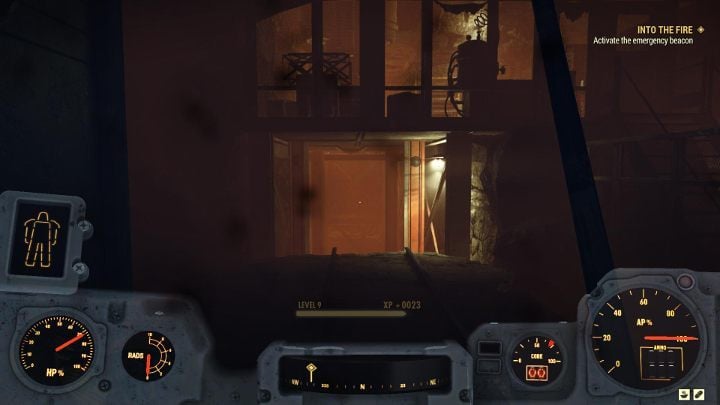 In the place shown in the picture above, you have to start going down – use the nearby stairs. Of course, you can also search the upper area – you won’t find any special items there, but some can be useful for crafting. 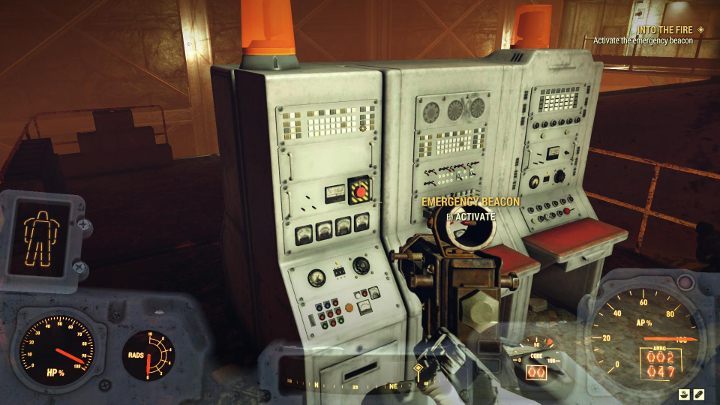 Your goal is at the bottom. Head forward, but first, you have to deal with the horde of Scorched. After reaching your destination, regenerate your health – when the alarm starts, you’ll be attacked by another wave of enemies.

After defeating them, you have to decide how to come back outside:

Regardless of how you get back, go to the Bernie again. Talk to him to finish the exam. 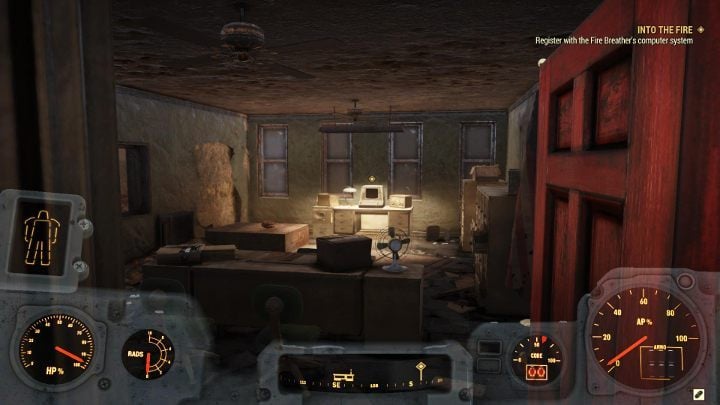 Now, you can go back to the Charleston Fire Department. Go upstairs and use the computer. Move to the next room and press the marked button – that way you’ll finish Into the Fire quest. As a reward, you’ll get Stimpacks and a heavy metal piece of armor. Additionally, you’ll automatically start the next quest of the main storyline – The Missing Link.