An Ounce of Prevention Summary

This Fallout 76 quest requires you to create a vaccine and administer it. However, it requires some scavaging and testing. Also, there are no optional objectives for this quest.

Furthermore, this quest will take you to AVR Medical Center and Greg’s Mine Supply to gather the items for the vaccine.

The Experiment
For the experiment, you will require some items that need to be acquired from Greg’s Mine Supply located South of Morganton Airport. Once you are there, to the house located across the street and get inside the basement and the entrance is at the rear of the house.

Follow the path from there and you will end up inside the Greg’s Mine Supply. You will find the Type-T Fuse inside the yellow wooden crate.

Blood Samples
Return to AVR Medical Center and before you install the fuse, you need to collect some blood samples from a Feral Ghoul, A Wolf, and a Mole Rat. Objective markers will lead you to these creatures.

To collect the blood sample, just kill your target and loot it. In the loot window, look at the bottom right. There will be a button to collect the Blood sample.

Once the process is done, use the Symptpo-Matic to administer the vaccine. This is the end of the “An Ounce of Prevention” quest.

An Ounce of Prevention Walkthrough

On this page, you’ll find a walkthrough for the sixth main quest in Fallout 76. An Ounce of Prevention mission activates automatically after completing Final Departure quest. During this mission, you’ll visit a new part of the world and fight many enemies. 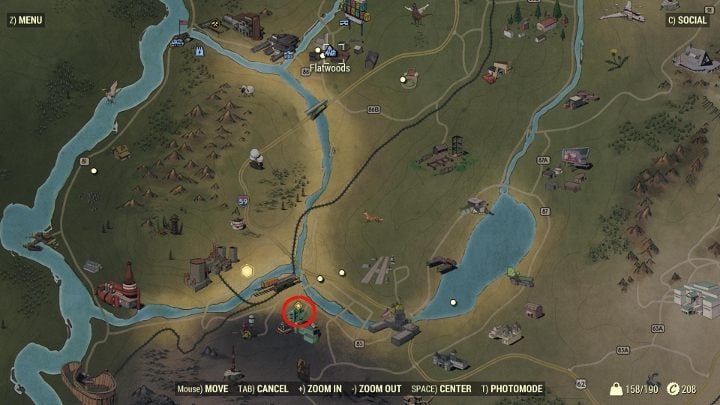 In this quest, you have to reach the location named AVR Medical Center and find doctor Hudson’s research. The place is located quite far from Flatwood, but the way up there isn’t difficult – you should just stick to the river (the location is marked in the picture above). Of course, if you’ve discovered a location near the Medical Center before, you can teleport there, but remember: you will lose a few caps. 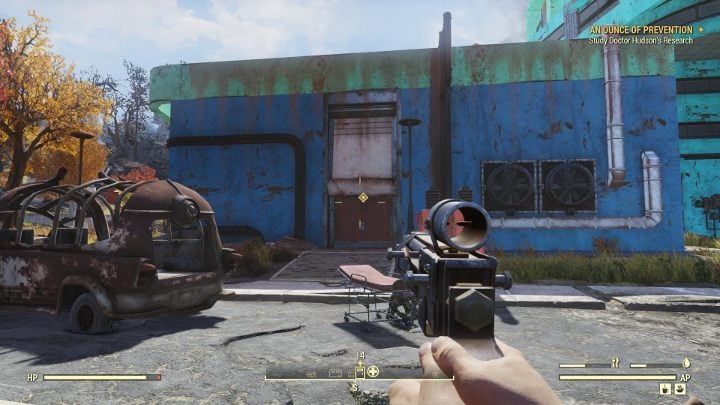 Near the Medical Centrum, you can meet a quite large group of Scorched and robots – fight them and go to the entrance. It’s worth to enter there with the stealth mode on because there will be lots of Scorched waiting for you. 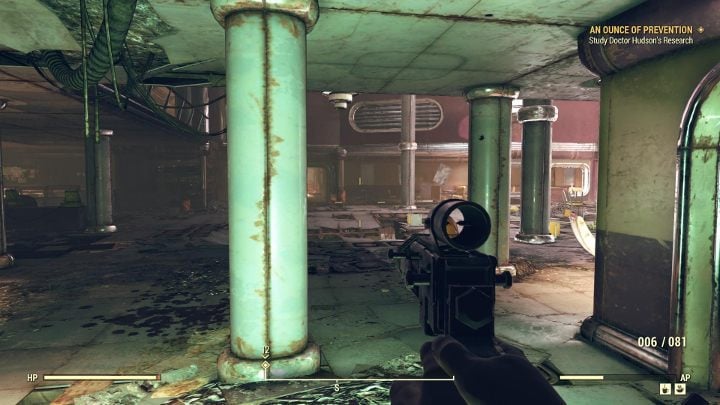 If you have decided to enter the building without the stealth mode, it’s likely that all of the Scorched will attack you – they aren’t very strong, but the great number of them can be a problem. Use grenades or kill them one by one. After dealing with them, use the stairs on the right side of the entrance or jump down through the hole on the floor. 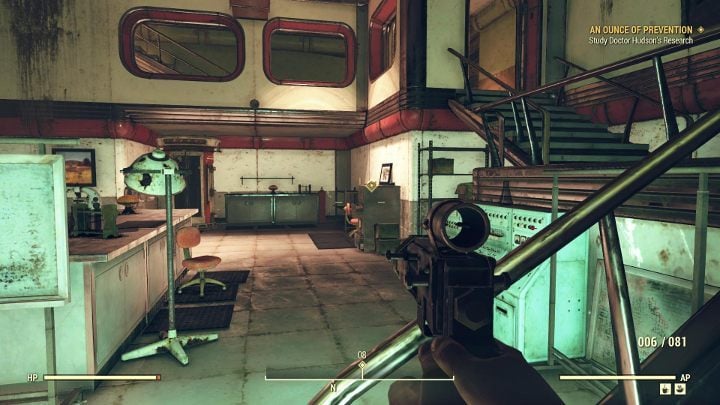 Go to the lab by following the marker. Use the computer and chose the first option on the screen – that will activate the next objectives. You have to obtain three blood samples from different creatures and a Type-T Fuse. The enemies from which you have to draw the blood and the location of the fuse will be automatically marked on your map.

Obtain a blood sample from a mole rat 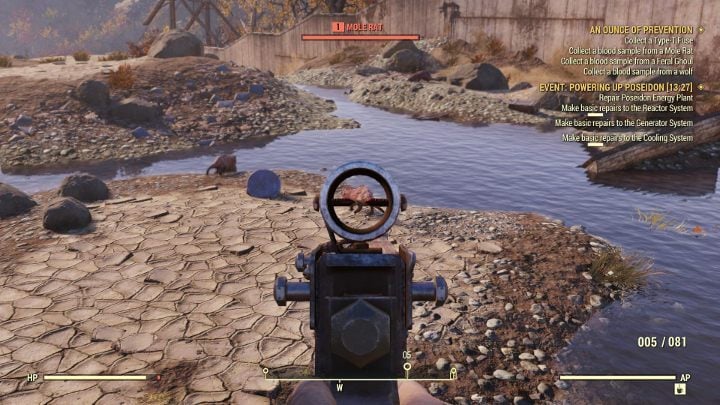 A Mole Rat blood sample is the easiest one to get. Mole rats are very weak and you can find them near the Medical Center. The blood sample doesn’t appear in the loot menu, you have to move the cursor over the corpse and push a separate button to draw the blood.

Obtain a blood sample from a feral ghoul 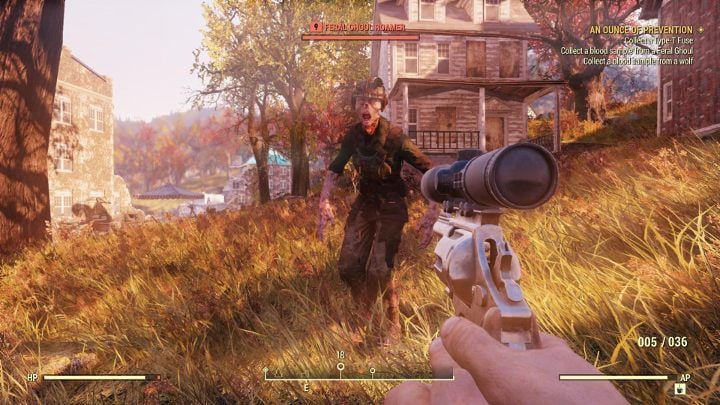 A Feral Ghoul is also not very difficult to deal with but remember – getting closer to it will increase your radiation level, so try to kill it from a longer distance. Watch out for Super Mutants, which can appear in the area – they’re definitely stronger enemies which know how to use firearms.

Obtain a blood sample from a wolf 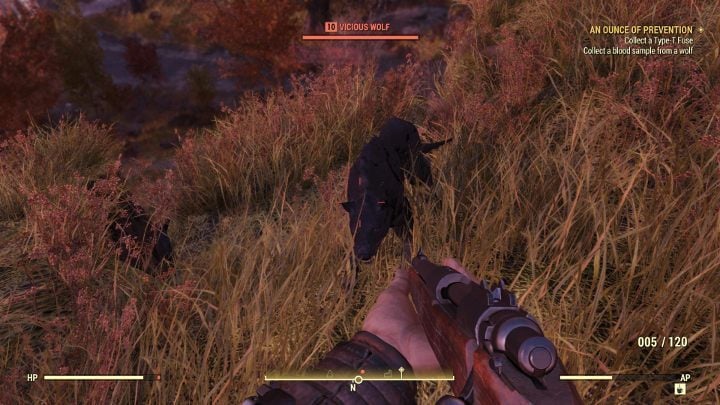 Wolves are found the farthest from Medical Centre and they are the strongest enemy out of the three. Their health level isn’t too high, but they’re very fast and difficult to shoot. It’s worth to use VARS or a melee weapon during the fight, they’re easier to kill that way. 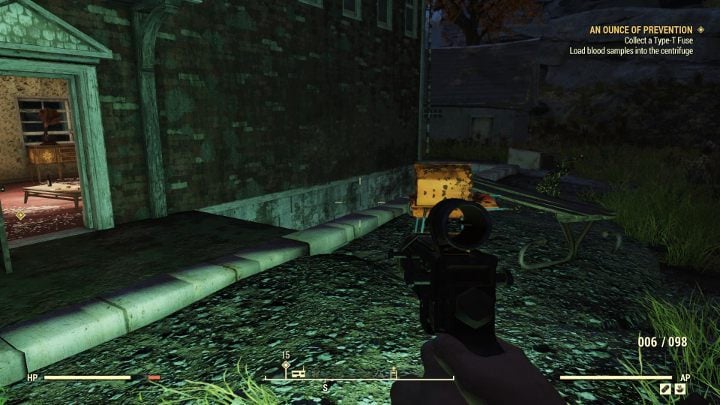 Getting the Type-T Fuse requires going back to the Flatswood area. Use fast travel or go on foot, if you want to explore. After reaching the marked point, go to the back of the house and find the stairs to the basement. 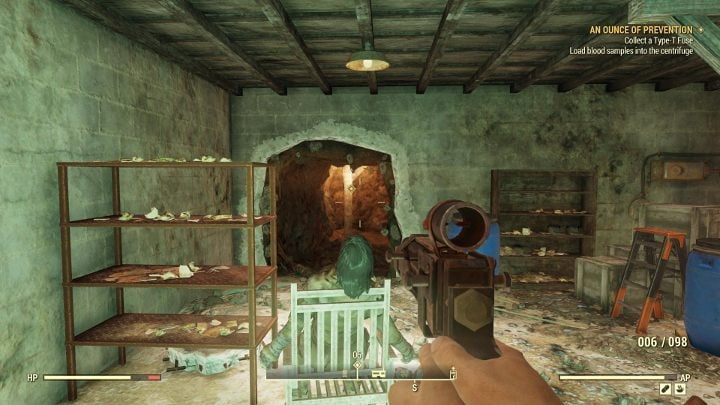 Downstairs, you’ll see a tunnel – use it and continue walking until you reach the room. After that, loot the wooden chest and you’ll find the Type-T Fuse.

Load the samples and install the Type T Fuse 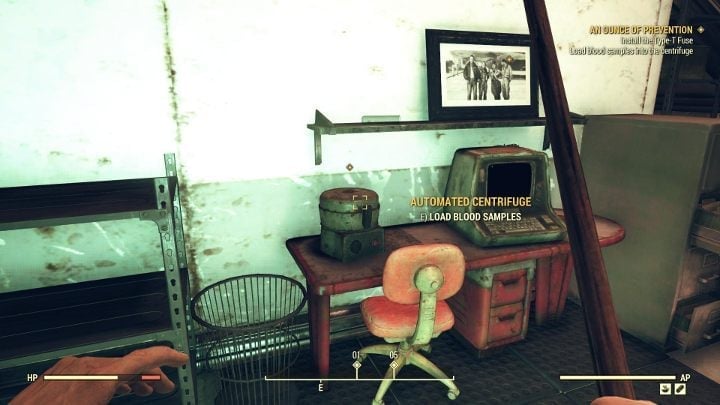 After completing all the objectives, you can get back to AVR Medical Center and go down to the lab. It is very likely that the enemies have respawned, so you’ll probably fight them again.

In the lab, load the blood samples (on the computer’s left) and install the fuse (on the right). Next, use the computer and choose the option that allows you to analyze it. 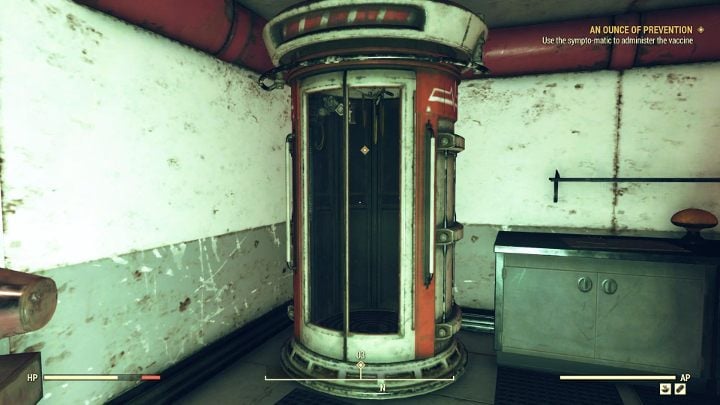 Lastly, you have to use Simpto-Matic capsule (you can find it in the corner). Go to it and press the interaction button, your character will go inside and get the vaccine.

After you leave the capsule, you’ll end the An Ounce of Prevention quest. As a reward, you’ll receive curatives, ammo, caps, blueprint to make medicaments and a leather piece of armor. In addition, you’ll get a side mission in which you have to visit the Charleston Fire Department (while doing it, you’ll get another quest for the main storyline).