Note: Communication is key, it is what can make or break a battle. If you aren’t going to be communicating at all then don’t join a tank squad, and if you want to join a tank squad try to atleast get some form of a mic. Having good communication skills WILL save your on the battlefield weather that be calling out tanks or infantry, pushing certain objectives, or even getting the hell out of dodge. Being able to communicate quickly, understand what is asked and relaying back orders makes things alot easier for everyone. The battlefield is chaos, explosions and small arms fire everywhere; commands can be lost in all that confusion. Don’t be afraid to ask again what was said, or even just outright ask what you should be doing.

To start out with we need to know the basics of tank driving, that means operating the tank to go forward, backwards, left and right as well as understanding all of the components from the tank drivers position! 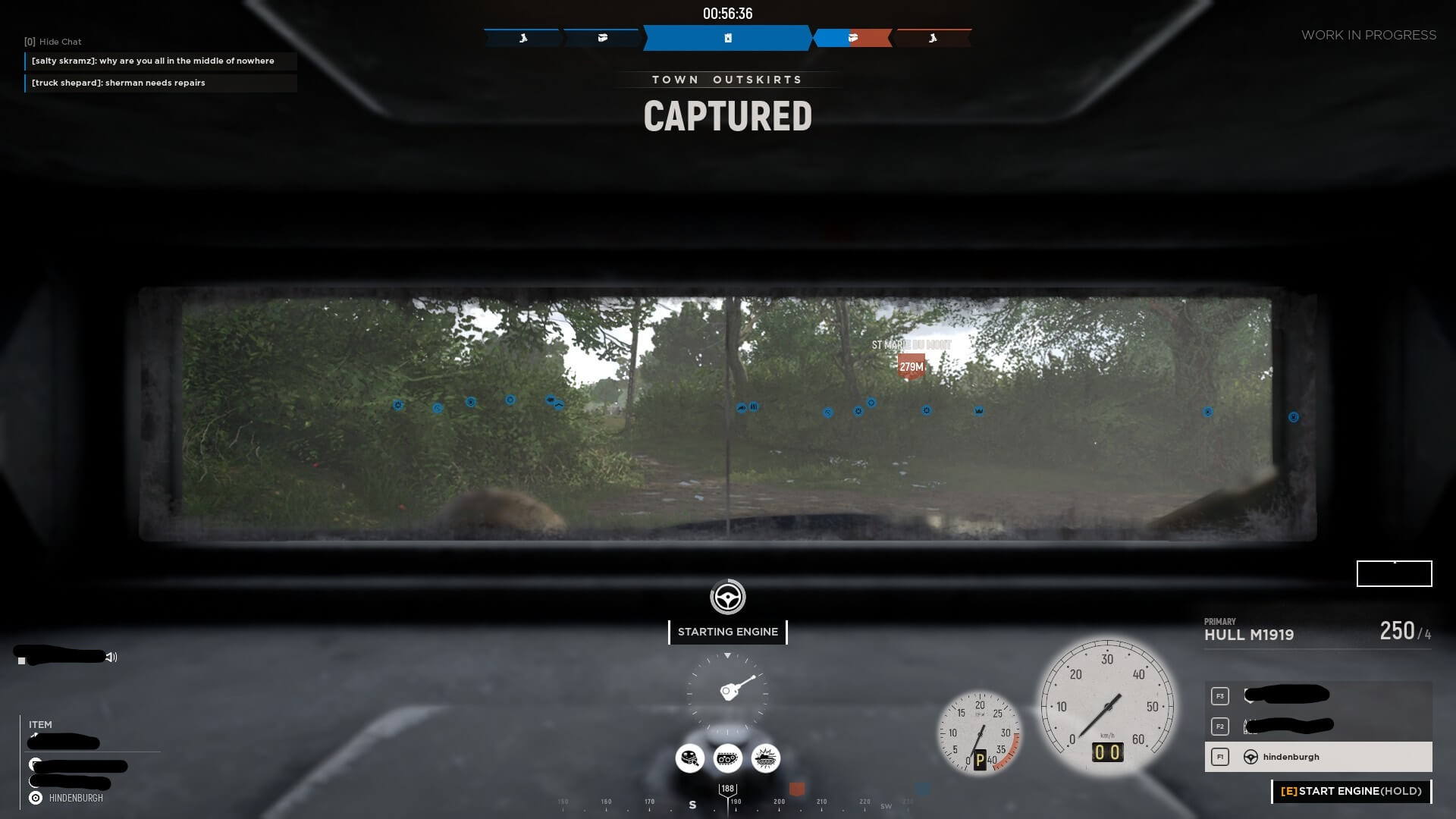 Getting into the tank and starting it is easily done by hitting the F key and holding down the E until the circle does a full rotation and you hear the engine idle out.

Shifting: Next is shifting the tank, yes it is a manual. There are six gears in the tank (R,P,1,2,3,4) hitting the shift key will take the engine out of park and into first gear! hitting the W key moves the tank depending on the gear set, the S key is only for breaking. The first gear is very slow but it has a lot of torque allowing the tank to start moving. After gaining some speed you can then shift into second gear, then into third, and we can really get moving when we hit fourth gear! While up-shifting is fun we also need to know how to downshift and reverse when needed, that is done by hitting the left ALT key until the tank’s gear is set to the desired setting. The reverse gear is just below the park gear and is very slow, but very necessary.

Turning: The A and D keys are how you will turn. The tank has to be set in a gear before you can turn, the turning circle of the tank depends on the gearing set. In first gear the turning circle is greater than the turning circle in fourth gear. Generally first and second gear is a good go to for quick turning at the cost of speed. Third and Fourth gear turning is possible but ensure that there is enough room for a wider turning radius.

Tank Positioning: When positioning the tank you should be wary of both enemy and friendly infantry and other tanks on the battlefield. A thanks armour is thickest in the front and weakest on the back, the sides offer some protection but the front armour is the best. A tank against infantry can be devastating if properly positioned allowing your team to advance and continue the assault. Usually having the armour pointed straight at where you are assulting is a safe bet but that doesn’t mean that the tank is invaungrable, AT rockets and AT mines are still killers so try not to stray to far away from friendly infantry. Positioning for tank combat is a bit different, a straight on approach can deffinetly be a easy kill for the apposing side, slightly angling your tank by even 10° can vastly improve your tanks survivability by alot. having your tank positioning properly when facing other tanks can cause a deflection of the opponents shot, not damaging your systems and allowing you to fight back.

When your tank takes damage, it can be one of or all of the three systems on the tank 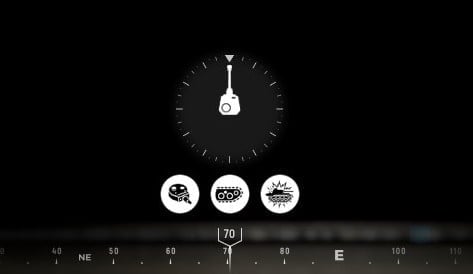 Turret: The turret is where the cannon is located, on the screen there is a map of the tank showing the direction the turret is currently positioned. When this system is damaged the turret will not move nearly as fast as a fully operational tank. Keep that turret position in mind if it is damaged and try to compensate the tanks position for any callouts.

Tracks: The tracks are what moves the tank, if these get damaged it isn’t the end of the world but if they get destroyed you will be a sitting duck stuck in first, park, or reverse gear. Watch out shots against your tracks, your gearing can change throwing the tank into a different direction and gearing.

Hull: the hull is the overall armor of the tank, this system covers all sides of the tank and gives a small understanding of the beating it can take.

Repairing the tank is simple but can be challenging to receive if; behind enemy lines, not near infantry, or a lack of communication. There are repair stations on most of the maps(excluding assault maps) set in the HQ. Certain infantry can repair the tank in the field those being riflemen, anti-tank, engineers, and support classes. these classes have wrenches which is what is used to fix the tank, engineers can also build repair stations anywhere where supplies are located. Repair stations are very handy for the tank squad allowing a for a quick repair. Ammo on the other hand can only be reloaded from the HQ

All of the larger variants of the tanks in-game have a hull mounted machine gun. The smaller tanks do not come with one so make sure you know what you can do offensively. The hull mounted MG’s are not the most accurate thing in the world, so it is important to guide in shots using the tracer fire and bullet splashes. The hull MG is also good for clearing out anti vehicle mines on roads, just make sure you shoot it before you run it over.

Running over your enemies can be just as satisfying as capturing an objective, killing a tank, or destroying a garrison. The key is understanding the difference between the infantry, engineers have the capability to lay mines down. If they successfully get a mine down before you run them down, there could be a nasty surprise waiting for you.

This section is meant for more advance drivers

In this section I will be covering driving in urban setting, advanced turning, unsticking tanks and other various tips and tricks i’ve learned in 300 hours plus of game time.

Use gears to your advantage

When you first get in the tank you can immediately shift into first gear while starting. (Its a small tweak but worth it) starting in first gear the tank will move slowly but as soon as the speed reaches 3KPH the tank can shift throughout the gears very quickly reaching tops speed in no time. Turning in any tank takes a small amount of time and space to do so, being in the right gear at the right time can make turning a breeze. Lets say you are on the country side of Sainte-Mère-Église about to head into town, trying to execute a low speed turn onto the streets in either first or second gear, is very effective but also very slow. A third or fourth gear turn is very fast but it is easy to get caught up on debris or even buildings, stopping your tank dead in its tracks. In confined spaces like in our example it is easy to make a wrong move and either lose time getting to a point in desperate need of extra firepower, or get yourself killed so where is the middle ground?

There are a few ways to do an ADV. turn, all of which require at least some form of practice. The easiest maneuver is definitely the 4-3-4 technique, starting in fourth gear and then shifting down into third to slow the momentum of the tank to have a more refined turn, and then back into fourth gear when the turn is complete! This method is by far the easiest but it can come with some complications, having to shift the tank out of fourth gear usually isn’t much of a time loss but accidentally shifting into the wrong gear will. Slowing the tank in a bad situation can make things go from bad to worse really quickly.

The “GAS Turn” and “Half-Break”

Another ADV. turn technique is what I call the “GAS turn”. This technique has been cultivated and mastered by myself and takes a lot of practice to effectively pull off but is 100% worth it. The reason I call this the “GAS turn” is because this method requires the release of the gas key. This method is most effective if you stay in one gear and while turning, to let off the gas. By letting off the gas you are losing forward momentum just enough to make turns alot sharper. It is important that when making these high speed turn to not lose too much forward momentum, and that is where this technique shines. When using this method you really need to watch the momentum of the tank, when too much forward momentum is lost the tank can stall. To prevent this from happening careful manipulation of the speed is needed, by letting off the gas until some momentum is lost and then immediately getting back onto the gas will shoot you right back into top speed. By doing this multiple times in a turn, it can drastically reduce your turning circle! The “Half-Break” method is a continuation of the “GAS turn.” Hitting the S key in between gas cycles reduces the forward momentum even more but by just tapping it and then immediately getting back onto the gas it can reduce turning time significantly. Both of these methods work in all gears, but be extremely difficult to pull off even for advanced drivers. It is recommended that if trying this method to start in a lower gear and work up to fourth gear.