The Just Cause games are known for many things: exaggerated physics, wingsuits, parachutes, massive explosions and a deliciously unashamed B-movie vibe among them. But the third-person action-adventure franchise has another tradition: as a repository for elaborate and plentiful Easter Eggs.

In the north-east of the map, hidden in wooded hills in the Delta Rio Wanay area, lurks a mysterious abandoned building. Emblazoned with the logo: “Project Solisian Amber” – a reference to the amber from which dinosaur DNA was supposedly extracted in the films – it’s a carefully cribbed copy of the Velociraptor compound from Jurassic Park. 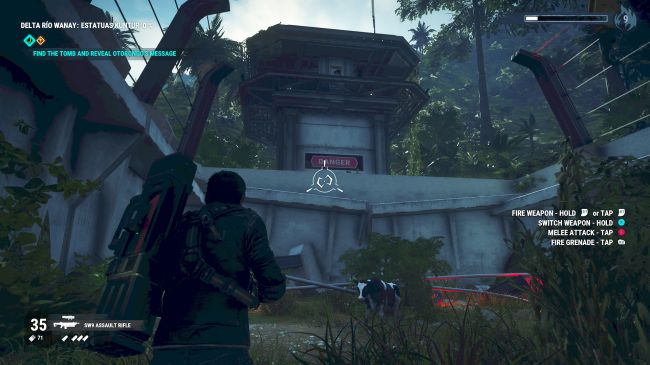 Although abandoned – a solitary cow roams around inside (again a Jurassic Park reference, as cows were lowered into the Velociraptor compound to act as food) – you can grapple up to a control tower and activate a console, which triggers yet another (voice-based) Jurassic Park reference which we won’t spoil for you.

Cheesy pop band A-Ha’s 1985 single Take On Me was renowned for its arty video, featuring a faux-pencil-drawn visual effect which was ground-breaking at the time. Clearly, it’s a song that has special meaning for Avalanche Studios, since its legendary video has been recreated in Just Cause 4. 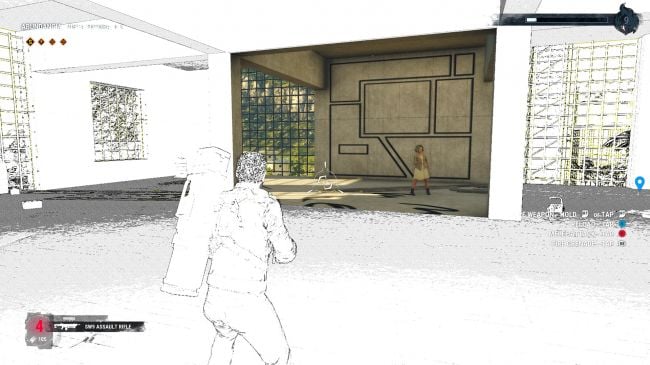 Head to the city of Vista Futura in the Abundancia district, and you’ll find a half-constructed building. Enter it, and you’ll hear Take On Me playing; head up to the second floor, and you will find yourself in a painstaking reconstruction of the video, complete with pencil-outline graphics, and a normal-graphics area in which a woman is dancing. Head towards that, and she’ll dance with Rico. 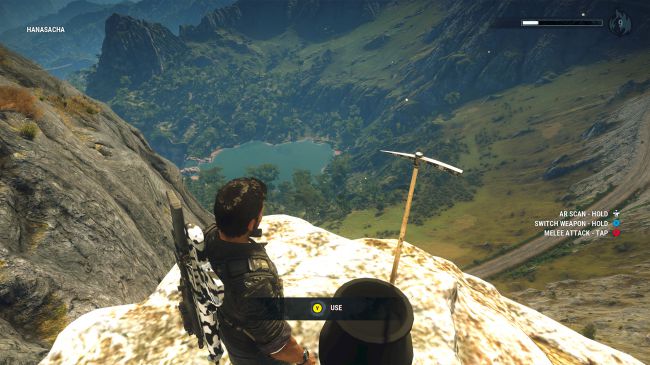 Towards the eastern edge of the mountain range in the Picos Helados region, you will find what might just be Just Cause 4’s most imaginative Easter egg. On a white rocky platform sits a cauldron and a pickaxe. Walk up to it, press Use and you will find yourself in a short but perfectly reconstructed version of one of 2017’s most bizarre and uncompromising indie games: Getting Over It. 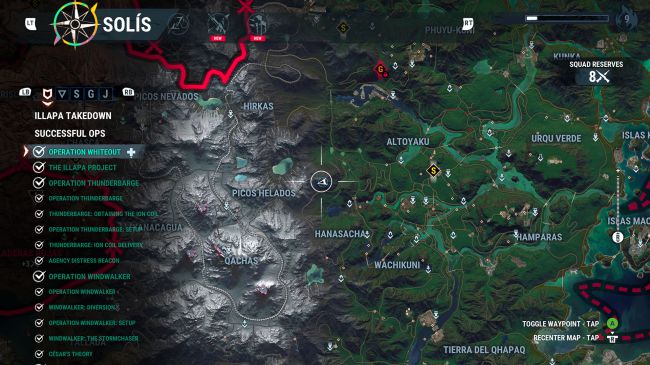 Just as he did in the original, Getting Over It’s creator Bennett Foddy provides a quirky, philosophical commentary, while you try to navigate Rico – now stuck in a cauldron, armed only with a pickaxe and confined to a side-scrolling perspective – to the end of a level. Which is every bit as fiddly and frustrating as it was in the original game. Clearly, Avalanche Studios loved Getting Over It… 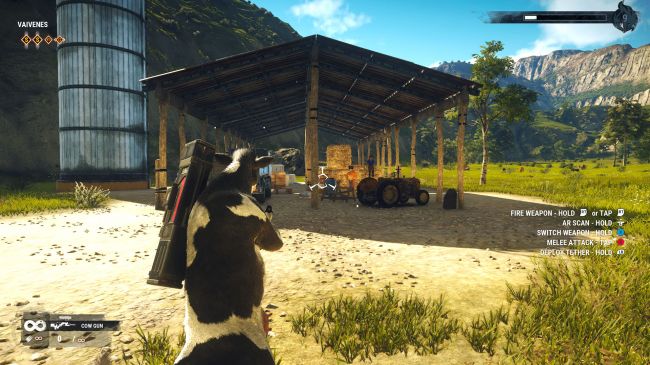 Head to the south-west of the map, to the north-east of Vaivenes and you will come across a quaint-looking farmhouse. On the stoop outside it sits a unique gun – and since it’s not just a weapon but an Easter egg, it also operates as a reference to Just Cause 3’s DK Pistol, which caused the heads of everyone Rico shot to inflate like balloons. 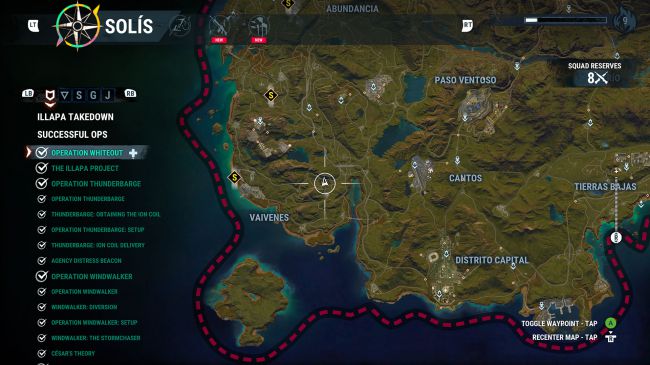 Just Cause 4’s equivalent is even more deliciously ridiculous: it’s a cow-gun. It’s utterly useless against anything other than humans (and when you carry it around, you’re effectively restricting yourself to one usable gun), but it’s well worth finding if you fancy a laugh. 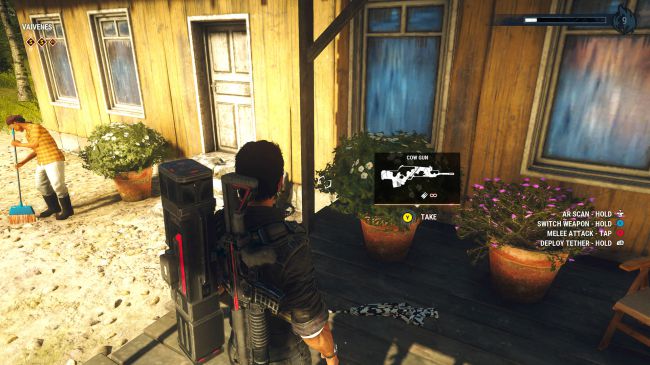 Shoot anyone with it (including Black Hand enemies) and they will turn into anthropomorphised cows. They’ll continue doing what they were doing previously, which throws up all manner of comic possibilities, and will walk on two legs like humans. Except they will also look like cows. And if you hit the cow-gun’s alt-fire, Rico will also turn into a cow. 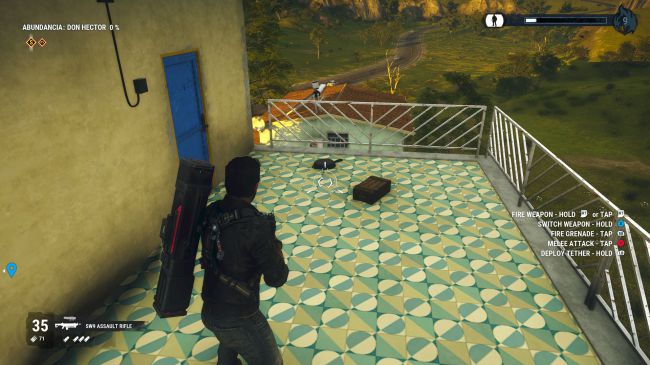 Just Cause 4’s Getting over It homage isn’t the game’s only tribute to one of Avalanche Studios’ favourite games. In the small village of Don Hector, in the Abundancia region, if you snoop around for a while, you’ll come across the balcony of a house on which sit two objects. A crate (with which you can’t do anything) and a frying pan. Those two items operate as a shout-out to PUBG. 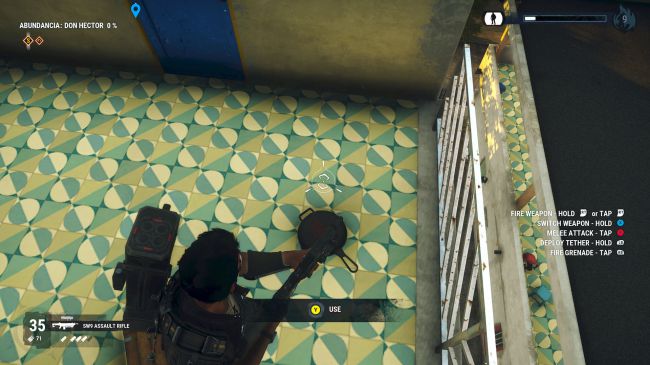 Walk up to the frying pan and hit Use, and it will replace Rico’s whip as his one and only melee weapon. It actually feels a bit more powerful than the whip when you use it on an enemy, so it constitutes that rarest of things: an Easter egg which is also thoroughly practical. 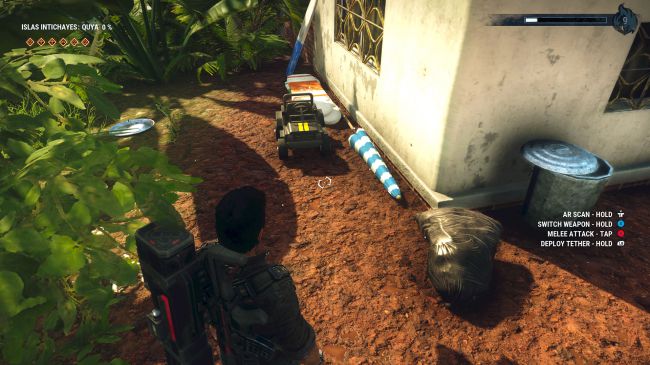 Solis’ city of Quya, to the north-east of the country, is supposed to be a hotbed of resistance to Oscar Espinosa – and it also harbours a great Easter egg. It takes a bit of finding: you must root around the favela-style part of town, above the huge stadium. But stashed around the side of a house, you will find what looks like a kid’s toy pedal-car, in the shape of a jeep. 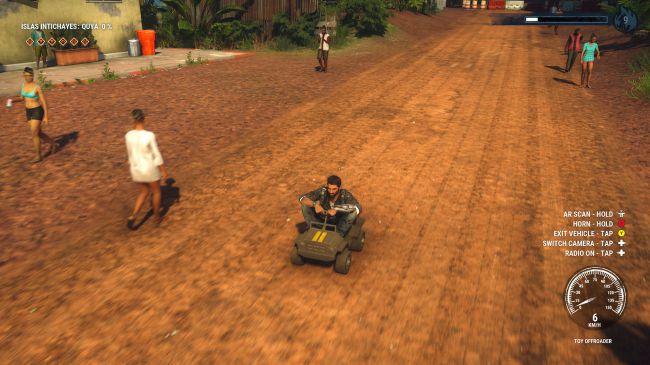 However, that toy off-roader isn’t what it seems: it might just be the fastest car in the game, and it’s certainly the most hilarious one. Rico Rodriguez looks utterly ridiculous when he climbs into it, but it works like any other car and, as with so many of Just Cause’s Easter eggs, is the source of endless amusement. 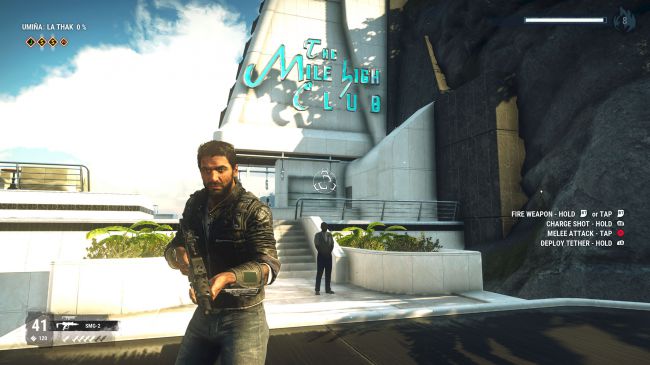 You’ll find it half-way up a forested mountain, serviced by a helipad. Outside, there’s a large bar area, but if you wander inside, you’ll find a veritable cornucopia of references to past Just Cause games. There’s no sign of a brothel, but this time around, the interior is a fully functional club, with the recurring character Bolo Santosi (from Just Cause 2 and 3) on the decks.

Among the dancers is a creepy-looking guy in an all-over green body-suit (who could also be spotted in Just Cause 3), and Santosi’s decks, naturally, were manufactured by Just Cause’s fake hi-fi company Panau Sonic. In effect, Just Cause 4’s Mile High Club is a number of Easter eggs packaged together. 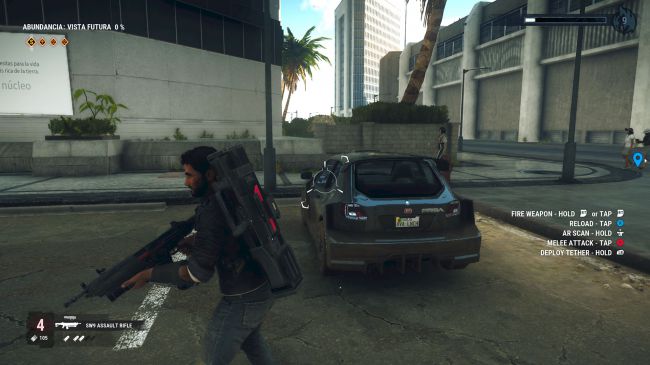 Not perhaps the most thrilling of Easter eggs, but wherever you go in Just Cause 4, it’s worth taking a look at the numberplates on the cars. Some of them, for example, spell 4VA LNCH, while others spell JC7 C4US. More divertingly self-referential nonsense… 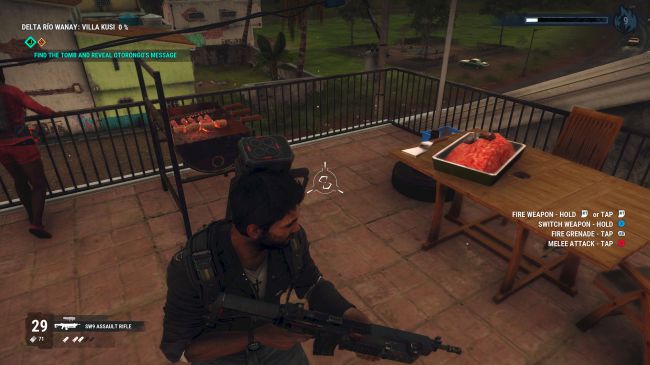 You might argue that they don’t properly qualify as Easter eggs, but there are two recurring themes in Just Cause 4 which provide great insight into what the good folk of Solis like to do when left to their own devices.

Firstly, you get the impression that not many of them are vegetarians – grapple around the house balconies in any random town or city in Just Cause 4, and you will eventually find a barbecue going on, with heaped plates of prepared meat waiting to be torched. Not only that, but the Solinos love a good rave. 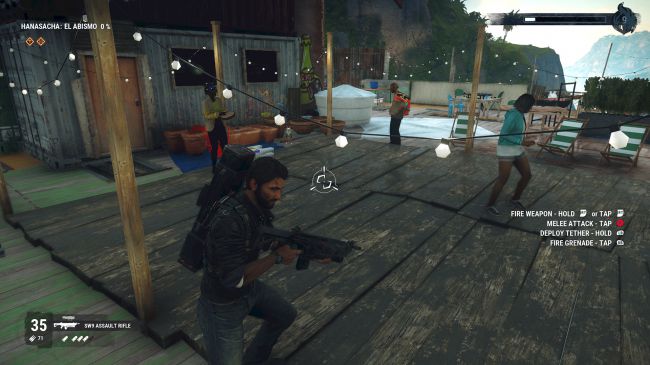 Usually – hilariously – to the accompaniment of cliched Andean pan-pipe music, pretty much every settlement in Solis contains a group of people having a good old outdoor rave – and at least one of them will be enthusiastically wielding a set of glow-sticks.