This section is about all of the different mounts that you can ride on in the game, and how riding each one benefits you differently. Unlocking a new mount always costs 1-3 gems, and once unlocked, they can be mounted by paying a certain amount of coins. Switching to a different mount will require you to pay the same amount to switch back. All mounts can run, but running will drain your mount’s stamina. If your mount runs out of stamina, you will need to wait until your mount fully regains its stamina before you can sprint again. You can tell when it is ready if it stops breathing heavily. To refill your mount’s stamina faster, stand still above some grass and let your mount graze for a bit. After your mount is done grazing, its stamina will be completely refilled, and it will get a stamina boost. These boosts give your mount unlimited stamina for a set amount of time, starting once your mount finishes grazing. Walking instead of running during this boosted period will not preserve this boost. You can tell when the stamina boost is still active because it will create white dust particles around your mount’s legs when it runs.

In Kingdom Two Crowns, a mount is any animal you are able to ride on. This includes everything from horses to unicorns to griffons. Each mount has its own skillset and unlock costs. As you explore the game you will continue to unlock unique mounts across the map.

Every mount has its own base speed. Some are faster and others are slower. A mount’s speed can even vary depending on what type of terrain they are on. For example, so mounts are faster in forests and other are faster in open grassland. Mounts have two different modes: walk or gallop.

How long your mount can gallop depends entirely on their stamina. Stamina levels will vary between mounts, with the mounts becoming visibly tired. When your mount is completely exhausted, it will only be able to walk until it recovers stamina. One way to recover stamina is to allow your mounts to graze. Check out our Kingdom Two Crowns Grazing Guide Here! You will also regain stamina just by standing and even a little while walking, but at a much lower rate. 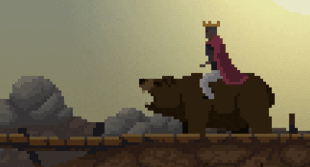 You will find the bear on the fourth island in some ruins that contain a beehive on a branch. The bear has low stamina but an excellent restore rate. It also isn’t exhausted for long. Its short sprints are extremely fast. You can feed the bear grass and farm coins by killing rabbits and raccoon just by sprinting over them. 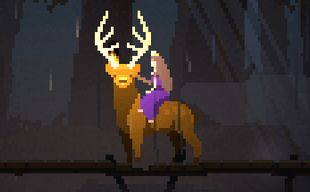 The ideal early game mount, you can unlock the deer for cheap when you reach the second island. It has stamina identical to your basic horse, however it is slower on plains and faster in forests. It also has the ability to charm forest dear just by getting near them. This makes hunting easy. 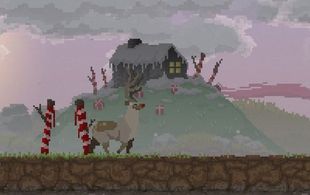 New Lands Kingdom: New Lands only: In the Christmas update during Christmas time (Dec. 25th- Jan. 1st) the game has an edited version of The Great Stag which is aesthetically changed to look like a reindeer. The only purpose of this is so when you find the Christmas tree and decorate it fully so that the sleigh falls from the sky, the Monarch can now pull it with The Great Reindeer. The sleigh will drop around 50 presents over a period of time. These presents will turn into coins when collected. 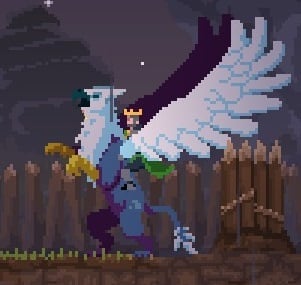 While exploring the forest, this mount can sometimes be encountered, where it will crash land into the ground from the air. When riding this mount, a stamina boost can be acquired while standing above any terrain, even during winter. This mount can also blowback and stun enemies with a short burst at the cost of stamina by standing still and pressing [Left Shift]. This stamina cost is taken from base stamina, and does not interact with the stamina boost, which prevents the player from infinitely spamming the blowback move while boosted.

This mount operates very differently than other mounts. It can sprint like other mounts, but is fairly speedy on all terrain. It’s speed boost, however, is obtained not by grazing over grass, but by resting under the sunlight. This makes obtaining a speed boost impossible for the lizard during the night. At the cost of stamina, the lizard can breathe fire by standing still and pressing [Left Shift], or by attempting to sprint by double-tapping a direction. The lizard spends a second winding up before the attack, and it creates a small fire trap for a few seconds that ignites all enemies that pass through it. 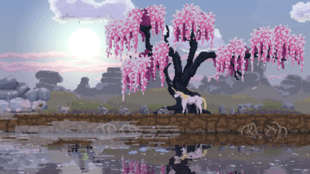 This mount works the same as it did in the previous game; It spawns from the pink tree, runs faster on grass, and upon grazing will “eject” 3 coins, giving monarchs an easy way to rack up money. 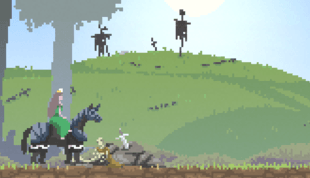 Kingdom: New Lands only: The Warhorse is found in an abandoned battlefield with the remains of a fallen warrior (dressed in the colours of the previous kingdom’s blazon). It has noticeably more stamina than the original horse (and slightly more than the black horse), but has the same speed.[1]

At about every 15 seconds, making the horse gallop activates a protective spell that lasts for about 12 seconds. Its armour glows along with a limited number (around 20) of nearby subjects (villagers, builders, farmers, archers and knights). They receive a temporary buff to their defences. This spell though doesn’t increase the defenses of archers and builders against floaters, when they’re on top of towers.

This mount is unlocked on the Fourth island. 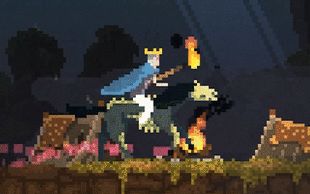 Only available during a Icon New Lands Kingdom: New Lands Halloween special event, this cursed horse is truly a spectacle. Equipped with extremely high stamina, it is a highly desirable steed for any ruler who ain’t afraid of no ghosts. However, this massive advantage comes at a cost; once you obtain the undead horse, you cannot switch to other mounts until you lose the game.

The horse is available at a special location just like the other steeds, and doesn’t have to be unlocked, players just have to be fortunate enough to encounter it – it generally spawns on later islands, it’s possible to encounter multiple undead horses during the event on different islands. With the horse also comesto a subtle visual change, the ruler is transformed into a semi-transparent ghost.

While the horse is only available during a limited time period (after which developers always patch the event out of the game, so it’s not possible to simply trigger it by changing time and date in the OS), it can be kept indefinitely after the event ends, as long as player doesn’t lose the game.