An Amusement for the Nobles

You will need to meet with everyone in the Hunting Lodge, or just wait until the quest is updated and there is a prompt to meet with people in the throne room. You will learn that in addition to the monster, another misfortune has come to the kingdom — people are dying because of an unknown disease, and your advisers want to carry out an operation. After that, all three of the following story quests will begin.

After the conversation in the Hunting Lodge, head to the Hunting Grounds which is located above the Lodge. Deal with various monsters, talk to people around, and the quest will be completed soon enough.

The Seed of Sorrow

This task you will complete before the others: just go to Jhod Kavken and tell him you are ready to proceed with the operation. Save your game just in case, and then choose the option that allows you to pass the test and save the patient. Defeat Ferocious Owlbear and complete the quest.

Head down from the capital to find the place where Shrine of Lamashtu is located. Go there, talk to Kesten and start the tracking. Defeat the enemies, move up and follow the trail of the escaped Lamashtu priest. You will enter the tavern by the road, the owner of which is the dwarf called Dumra. Talk to her and the other guests — a couple and widow Olika. You will receive the keys to their rooms. The key to Dumra’s room is in the warehouse, where you can go through the kitchen. Tsanna, Dumra’s servant, will be in the kitchen.

After talking with everyone, go upstairs and look around the rooms. Next, talk to people one by one. Olika says that Dumra was the last to appear in the room. Ask Dumra about this, she will tell you that she was in the kitchen because Tsanna dropped some dishes. If you go to the warehouse, you will realize that someone recently used the back door. The dishes in the kitchen are not washed. Tell Kesten that you suspect Tsanna. Defeat her in battle and decide what to do: pardon her, expel her, expel everybody involved in this, or allow her to perform the last ritual to save Olika’s child. One way or another, the quest will be completed. By the way, even if you suspect another person, Tsanna just comes out of the kitchen and attack you.

Head to the Goblin Village to the right of the capital, enter its territory and fight with huge monsters, which are controlled by the small jerks. You need to get to the top part of the location, where you have to kill the Owlbear and talk to Nok-Nok. The goblin can be killed, left alone or allowed to join you. Whatever you decide, the quest will be completed, netting you 600 XP.

Leave the capital and head to the right, along the river. Next to it, you will find a new green marker (a bit lower and to the right of the goblin village you visited before). Go and talk with Kesten. Follow the only path there is, killing goblins and freeing or killing their prisoners. In the end, you will get to the shaman. Defeat him, talk about everything and move back to Kesten’s camp. Help him in the battle against the monsters, then return to the capital.

Defeat as many mutants as you have to until you reach the entrance to the throne room. Here, chat with the guard for a bit. A cut-scene showing the appearance of a giant monster will play. Head to the monster, beat the minions, go back to the throne room and kill the creature. Talk to Jhod Kavken to complete this part of the quest.

Now you know where the mutants are coming from. You need to go to the right along the river, reach a huge lake, cross it and find the cave icon in the bottom right — this is the Womb of Lamashtu. Make your way through the cave until you find yourself in a location with colorful flowers. Defeat the enemies and catch the bird near the tree, acquiring the bird in the cage.

Go through the blue mist — it will teleport you, changing some objects of the location. Climb up following the Guardian of the Bloom, watch the cut-scene and proceed to the right through the blue mist to meet a strange gnome. Talk to him to hear a riddle with a hint. There is a stone nearby — out the bird in the cage on it, and then interact with the fire near the gnome to change the day to night. As a result, the bird will turn into bird’s bones. Take them.

Gnome gave you a magic lantern. Equip it and activate with a panel in the center of the screen. You do not really have to do it since the lantern turns on anyway when equipped (RMB). It allows you to go through the mist without teleporting. Using the lantern, reach the top left corner and discover a far blue mist. Use it to alter the location and see that very flower. Destroying it with weapons is useless — a new one will immediately grow in its place.

You need to re-enter the blue mist near the flower so that it disappears, go down and walk a bit to the right to the lake. Kill the nearest enemy and interact with the lake. Place the remains of the bird in it, then fetch some poisoned water and head back to the flower. To see it again, enter the mist. Maybe you will have to it twice. Use the water on the flower, talk to the gnome and decide who will enter the cave and who will deal with the flower from this side. The main catch here is that the companions who are left with the main character must have fire spells or an ability to use fire scrolls. You will need those to beat the magical Scythe-Tree. Then, defeat the remaining enemies in the cave and burn down the flower. You can decide if you want to take a part of its root before doing so.

Go out and return to the capital to gather the council in the throne room. This completes the quest and the chapter. 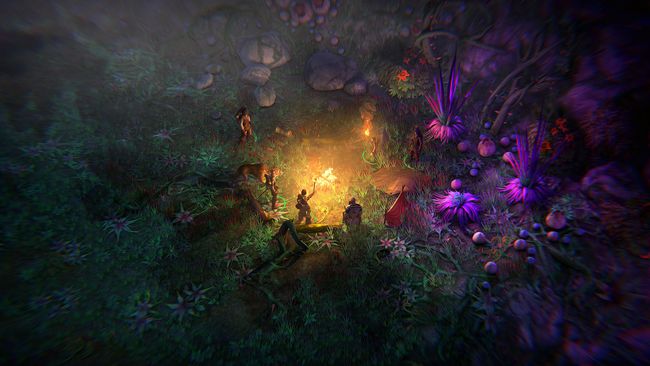