In Red Dead Redemption 2 there’s a serial killer committing murders and leaving mutilated corpses in the wilderness for you to find. The serial killer has left behind clues to his whereabouts at the scene of each murder. In this guide we’ll go through all RDR2 serial killer map clue locations so you can solve this mystery.

The first location on your grisly trail is to the northeast of Strawberry and the southwest of Wallace train station. South of the station, as you take the road southeast towards the Dakota River, you’ll find an eviscerated body on the north side of the trail. Yes, that is a leg. 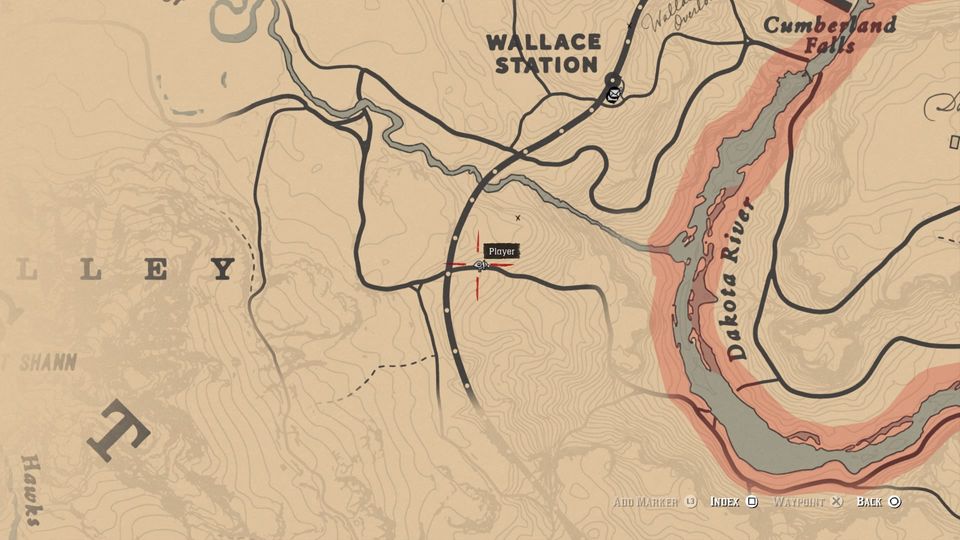 Press both the left and right analogue sticks into together to trigger Eagle Eye, and you’ll be able to track what you’re looking for. Follow the trail of viscera north to the black “X” on your map marked as “corpse”. 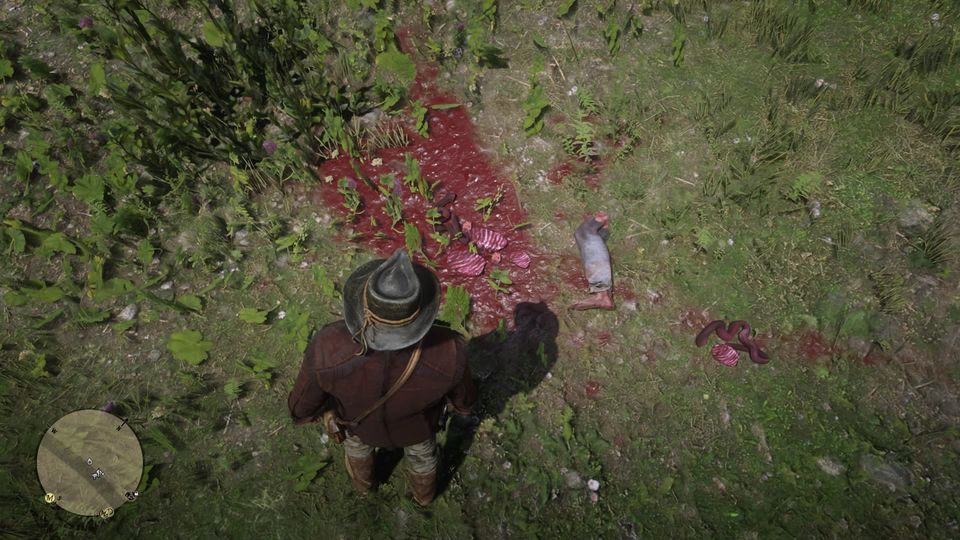 Here, you’ll find the serial killer’s first victim, displayed with the ghoulish message: “do you see”.

To your left, you’ll find a severed head, which contains the first killer clue piece. Inspect it, and you’ll see that it’s part of a map. It’s a challenge left by the overconfident serial killer, daring someone to try and find them. 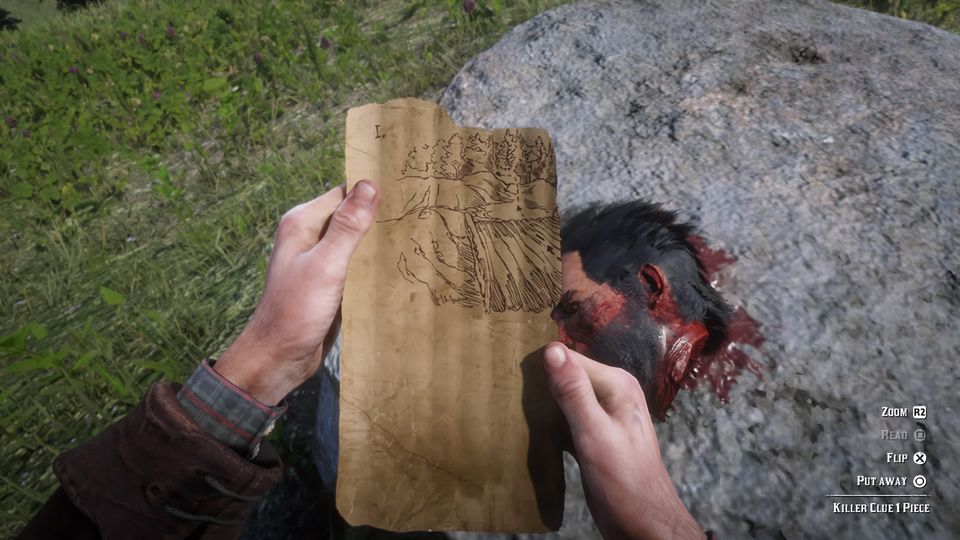 Next, you’ll find the second killer clue piece to the south of Valentine post office and train station. Again on the north side of the road, you’ll find a torn up body on the trail to the west of Citadel Rock, on the west side of the train tracks. 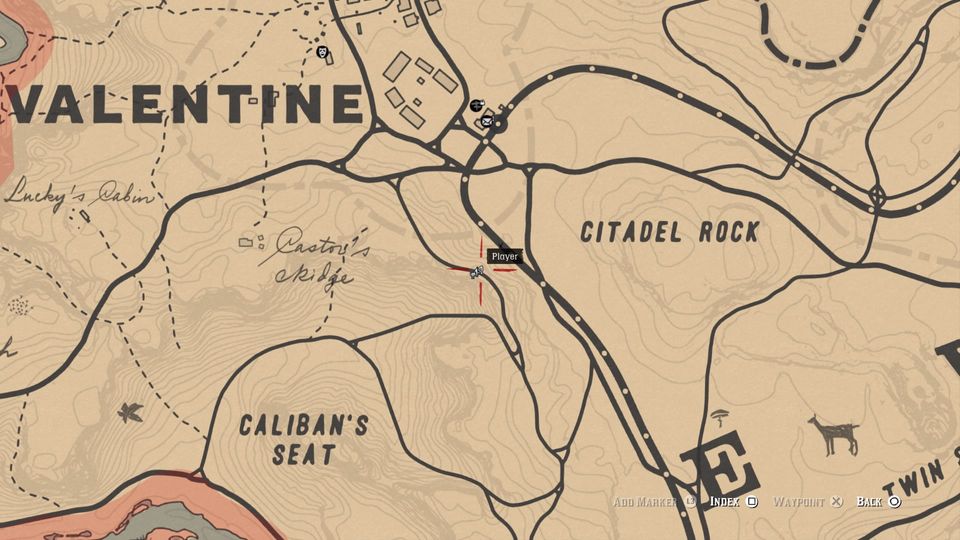 Strung up on the supports of the railway line is the serial killer’s second victim, and you can find their head – along with the next piece of the map killer clue – stuck to a post up to the left. 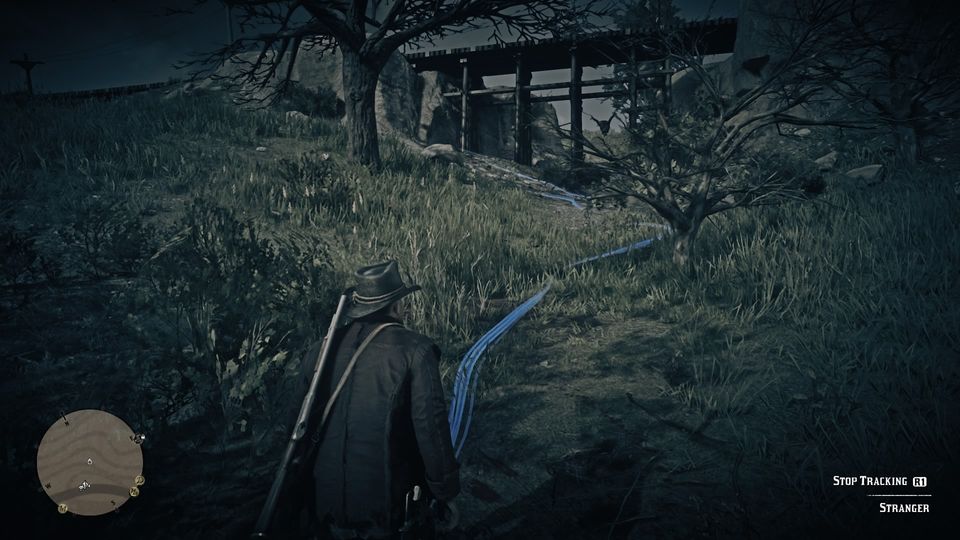 The chilling message of “look on my works” is probably the first you’d stumble on if you’ve not looked for this side mission specifically – grim.

The final piece of the puzzle is closer to the road than the last two. You need to head down south, past Rhodes and past the civil war battleground at Boulder Blade. Right where the last “S” in Scarlett Meadows is printed on the map, is where you need to go. 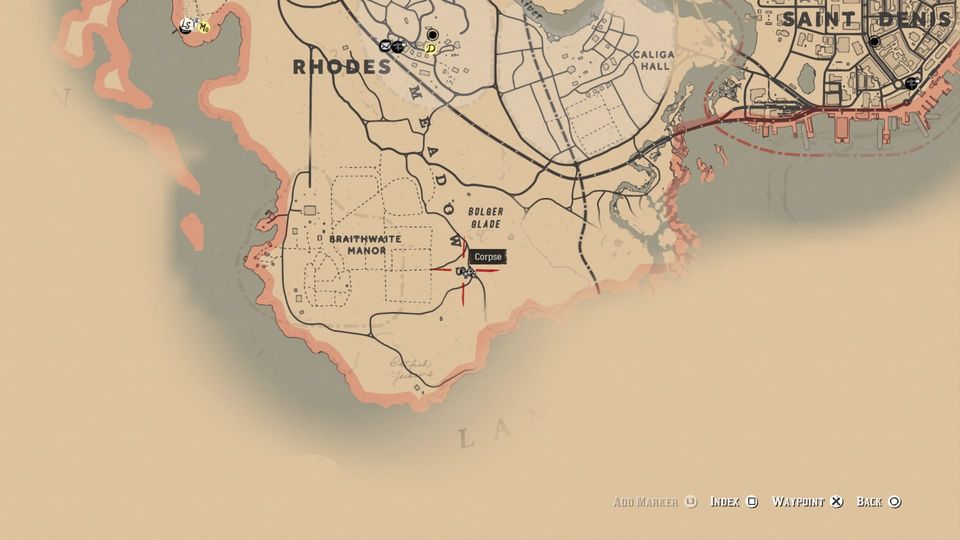 To the east of Braithwaite Manor, on the west side of the road, you’ll find the third serial killer victim, along with the third killer clue piece of the map. 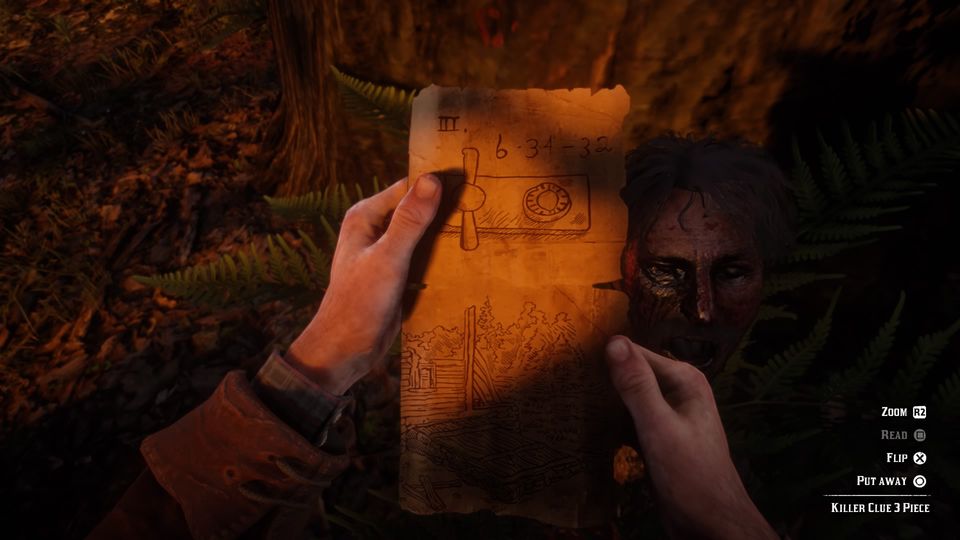 You’ll find the severed head behind the tree.Interestingly, this piece of the map comes printed with a set of numbers, and what looks like a safe. 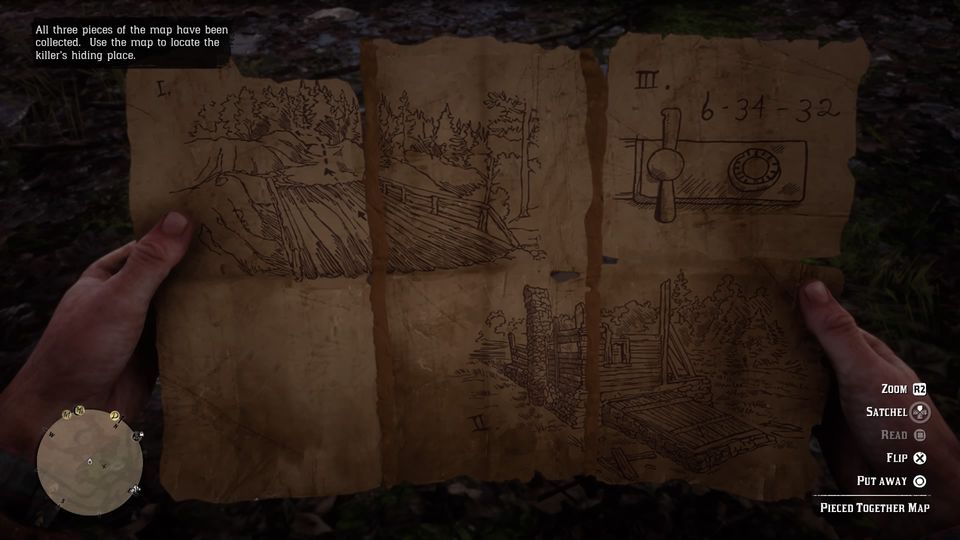 Where to find the serial killer?

So, to find the serial killer you need to follow the map which points you over a bridge to a ruined cabin, with the code to a locked set of storm doors.

The bridge on the map is the one to the southwest of Valentine, to the northeast of the Downes Ranch. Go across it, and you should be able to see where you’re going. 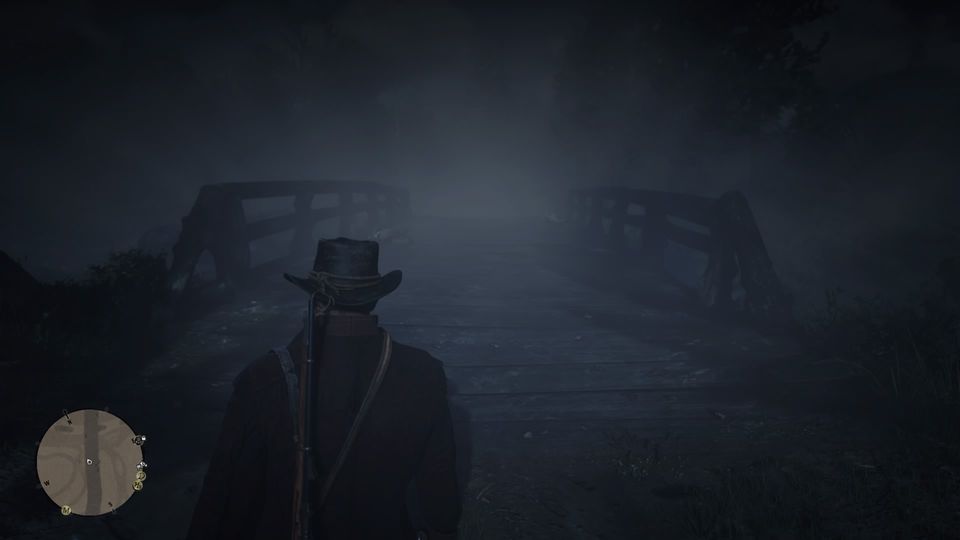 To cut a long story short, the serial killer location you’re looking for is Lucky’s Cabin to the southwest of Valentine – you’ll see it marked in pencil on the map if you take the southwestern road out of town, and before long, it’ll get marked as a Stranger Mission called “American Dreams”. 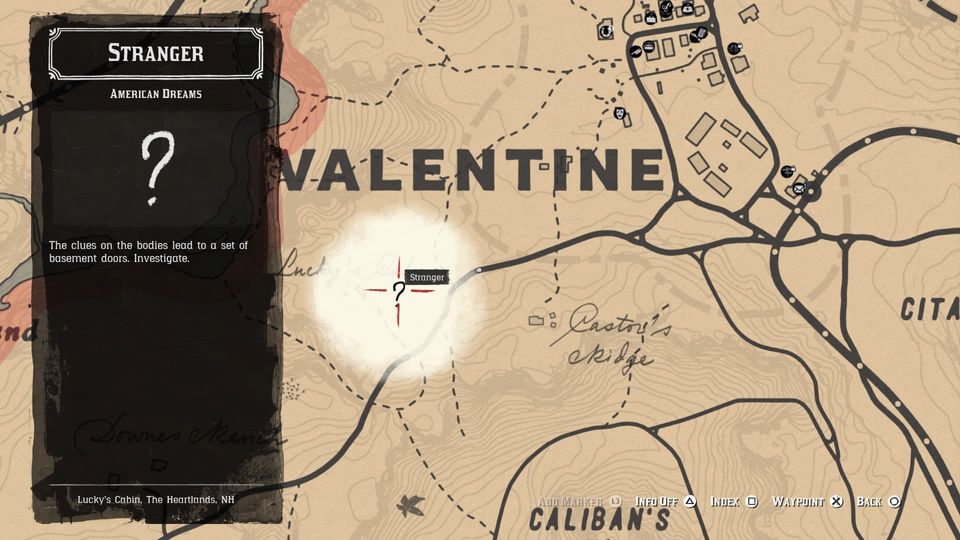 In the centre of the white Stranger area, you’ll find the cabin.

The safe combination for the lock is 6-34-32, but Arthur should open it automatically.

Explore the basement at your peril, and enjoy the spooky encounter in store – I won’t spoil it. 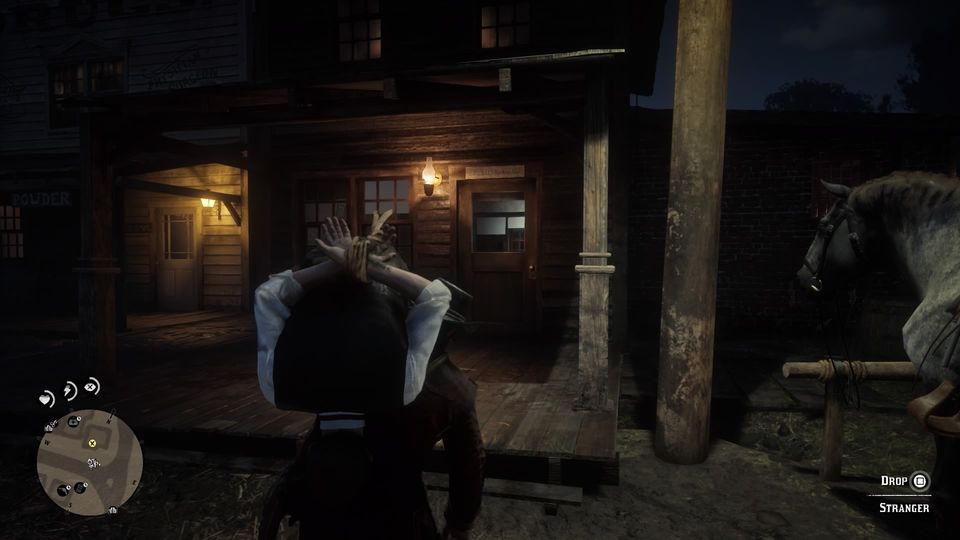 Once that’s over and done with, stow the Stranger on the back of your horse and head into town to turn him in.

In the subsequent scene, you have a choice – kill the serial killer, or let the Sheriff kill him.

Do the dirty work yourself and you’ll be rewarded with $20. Keep your gun in its holster and you’ll get nothing but the satisfaction of a job well done.