Scp Secret Laboratory uses a system to randomly generate each portion of the facility excluding the surface, so that there isn’t a preset meta to making a easy escape as a class d or scientist. But to prevent a completely random system where certain areas don’t appear, the developers created certain pregenerated layouts, which switch around the rooms that can actually give the players progress in escaping.

In this guide, I’ll show you these layouts, and give information on each one so you can make the best decisions on where to go to get cards or to find 914. 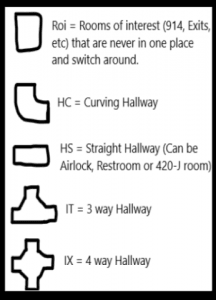 Before you see the layouts themselves, read this legend to know what each phrase means. I used the phases I used as they are what are used in the game to label each hallway in light as well as other rooms.

It should also be mentioned that CD is the Class D cell block. I didn’t have it in the legend because I forgot to add it. CD is the base for every layout and thus should be treated as the starting point. 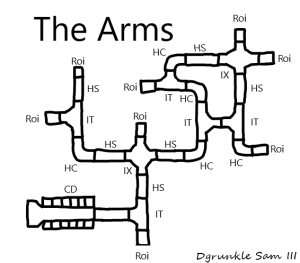 The first and most basic and *linear* of the layouts. It is clear that If you’re a class D, the best way to go is left, check the Rois for rooms like GR-18 and PC-15, and then go to the airlock. remember rooms like #9-14 and ##-00, as they are the upgrade room and armory.

Once you have a keycard return to 914 to-yada yada yada, this isn’t a tutorial guide, this is a guide to little known information that can only be useful to those that have played the game for a good amount of time. Now that we have that out of the way, we can go onto the next layout. also, this favors D class the most of the other layouts. 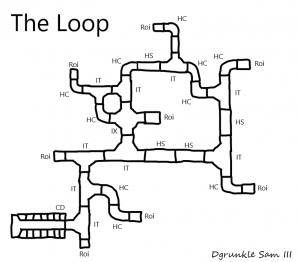 The Loop is less favoring of d class than it is to scientists.
There are few rooms that are next to the main path that *loops* around. You have to make a risky move to find a card. 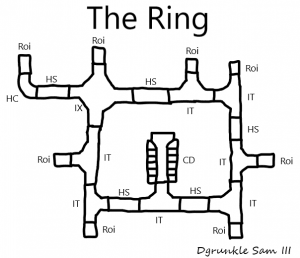 Although all but one room is next to the *ring* formed by the main path, usually scientists, by some gut feeling, go the direction away from CD, getting to 914 and the other rois before the D class do.

But it’s the moment that a scientist doesn’t that a D class can lead the others to victory. 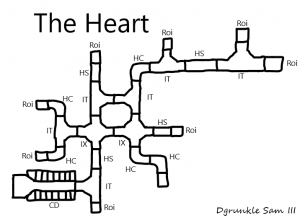 Here, the Rois are all clumped up in one place, only a few hallways away from one another. Despite the California Gold Rush waiting to happen, the D Bois on the east coast have aways to go, while Prospecter Nerd in the west is already at the rivers sifting through the sand.

When reaching the first IX room, examine the doors quick, because open doors mean opportunity is likely gone by that point. go through closed doors, like the one above CD with 2 Rois. After possibly gaining the golden keys you need to 914, go to the north-east hallways, as they are more likely to house 914 by this point.

Before actually drawing this layout I saw it as 2 large arms sticking out from the IX room in the middle, but it’s more of a chaotic mess now. Oh well, old habits die hard, and this one isn’t going out without a fight.

Here, you can cut the rooms into 2 portions: The rooms before the HS leading to the mutated arm, and the ones after that. As a d class, check the room to the right, then move to HS, then IX, the Roi, and the HS to the left. Turn around if you ever see a scientist along the way and head for the other arm.

Conclusion, how this helps you.

After showing you these presets and professional opinions about them, you might ask: but how does this help me, as a player, get gud?

You haven’t been paying attention then. I taught you about the presets and how you can get cards more often be remembering them. Now you have a rough idea on how it works. and although you probably won’t know everything yet, you’ve got somewhere between 10% and half the battle. This guide won’t make you good at the game just by reading it. there are always factors outside a guide like this. SCPs, guards, Chaos, guns, peoples actions, short term goals, long term goals, and whether you run into PC-15 or #0-12, IT’S 012 EVERY SINGLE TIME-

So this is the end of the guide. I hope you enjoyed.