Terraria is a briliant game. In this guide you’re gonna learn the basics of the game!

First guide for survive the first night in terraria

Character and world generation when you have started terraria, click singleplayer.
Create a player and customize it as you want. When that is done, create a world. choose the size you want, and if it is expert or normal. I prefer normal for new players. When you have done that, the game wil begin generating your world. When that is done, you can begin playing.

When you are in your world, start chopping down trees with your copper axe, then place the wood down, and make a little box shape. Then craft a workbench by opening your inventory by pressing ESC, scroll down until you find it. When you craft a workbench place it down and stay where you placed it. Now you can make many things, such as Tables, Chairs, Walls, etc. Kill some slimes with your sword, and use the gel to craft torches. Make backround walls and fill in the backround. If you want to get rid off a block, use your pickaxe. Craft a hammer to remove walls. A guide will spawn with you when you make a world, the guide is a NPC (non-player-character) he will tell you basic information about the game. 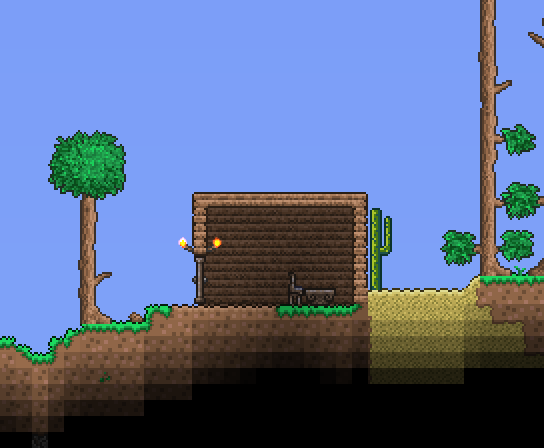 After you build your house, the sky will become darker. It’s not day anymore, it’s a night with flying eyes and brain-eating zombies! Zombies will only knock on your door if it is a blood moon, so you don’t need to place blocks in front of the door. You should be safe. If you mined some stone in the day, you can craft a furnace. A normal Terraria night last 10 minutes.

First guide is done. Let’s go to the second guide.

How to survive your first night in Terraria

After building the starter house, you might want to start preparing for zombros eyes and other deadly creature. Like a firefly! (funny rite) Fear not, as this NON-JOKE guide will help those new players.

Don’t mine before anything

Sure, you may have seen YouTubers do it, but they’ve most likely been playing since early terraria. So do not under any circumstances start mining before you get weapons and armour. It won’t work and you’ll just end up with a death on the counter. If you keep track of that.

Alright, you might want to get more wood because what you want to do is get; a wood sword, better than that crappy copper shortsword, a bow, a hammer (HAMMER TIME!) and a FULL wood armour set. Then get 30 stone, 3 torches and however much wood it is for a furnace because I FORGOT! Use the 20 stone and the other items with the work bench to make a furnace. Then use the leftover stone to make arrows (I think you need wood aswell).

But what about the gardening? Use the acorns on grassy ground to make a sapling (ogm it mincraf). Use it in an area you don’t want a tree in, as it will grow into a tree.

At I think 8:00 in terraria time, it will turn to nightfall. Instead of running out and mainly going Rambo, only go out occaisonally. And use the bow for long range before you start stabbing zombies with a sword.

How to deal with zombies: Litteraly use what I just said.

How to deal with Demon Eyes: Use bow and arrows instead of jumping off the roof.

Just wait it out until it turns to day. As I’m writing this, there are… 6 zombies near me. But, I haven’t died as I stayed in my house.

Nice, you survived your first night. Now go into the nearest mine and get digging. Get better armour, build more houses, get more NPC’s, get better weapons, stab more things and die a whole bunch.

Don’t mind my house, I just wanted to make it like that. But seeing the sky, it should be day…