A guide consisting of tips and strategies to reach 100% in Slay the Spire.

To unlock Ascension mode, you have to successfully finish the run 5 times across all characters or slay the 3 different Act 3 bosses.

Time-Eater, Awakened One, Donu and Deca.

I recommend doing this with either The Silent or Defect.

The Silent: There are several +Energy cards (upgraded prefered) to help you obtain this achievement. I recommend going with the ones requiring the least amount of setup, for example: Outmaneuver following a Burst plus Adrenaline and/or Concentrate combo.

The Defect: Echo + Energy/Plasma cards (Double Energy, Recycle, Turbo, Fusion and Meteorstrike) is the deck you should be aiming for. There are multiple ways to play this out, depending on your hand. For example: you could recycle Meteorstike for zero energy (with an upgraded Recycle) and then play Double Energy or Turbo. You could also go with mutiple Plasma orbs, where adding Capacitator and Consume to your deck would be recommended. Adding Aggragrate to your deck is only viable if you have a beefy deck.

Ironclad: I recommend going for a Barricade + Entrench setup. This is the fastest way to obtain these achievements. If the RNG Gods don’t bless you with these cards you can also go for the slower Dual Wield + Metallicize setup (not recommended though). Of course, a combination of these work as well.

The Silent: Getting these achievements with the Silent requires more planning, but is viable. You should aim for a small deck where Burst + Blur (preferably several upgraded copies) is your bread and butter. Recommended additional cards for this deck are: Well-Laid Plans, Adrenaline, Escape Plan, Dodge and Roll, Outmaneuver and Deflect. There are more to list here, but as you want to keep a small deck i would obviously only pick the ones that suit your deck.

Defect: I personally think getting these achievements with the Defect is the most cumbersome. As there is no card that retains your block in the Defects arsenal, getting your hands on the Calipers relic is highly desirable. You could build a deck with a Focus/Frost orb setup (Echo, Capacitor, Consume, Loop, Hologram, Fission, Coolheaded, Glacier) or a “raw” block setup (Echo, Hologram, Reinforced Body, Equilibrium, Charge Battery) where you keep increasing your block ( > 15 per turn).

Another option, but very RNG dependant, is by getting hold of the Prismatic Shard relic and hope that you get Barricade as a cardreward somewhere down the line.

A turtle approach with poison cards like Deadly Poison, Noxious Fumes, Bouncing Flask along with a Burst and Catalyst (preferably upgraded) should do the trick. Enemies with lots of HP should be your target (Bosses, Giant Head, The Maw)

I recommend doing this with the Silent so you can benefit from poison (except for the poisoned stab card) and the Caltrops card. Having a damage dealing relic and/or potion will only make this easier.

* As suggested by Xgpmcnp you can also get this very easily with the Defect:

For the ”Come at me” achievement, you can take the Neow’s Laments relic at the beginning making everyone have 1 HP. Then, with Defect, let your lightning orb take out the enemy. Achievement obtained.

Multiple decks are viable here. An Ironclad deck revolving around Perfected Strike works if you fill up your deck with additional Strike cards (Pommel Strike, Twin Strike, Wild Strike, Perfected Strike). As this deck is an offensive deck, adding 1 or more Clash cards is recommended. I wouldn’t recommend casting Wild Strike often (if any) on longer battles as it will fill up your deck with Wounds making your hand crippled and preventing you from playing the Clash card. If you feel you lack AOE you can add Thunderclap and/or Cleave to your deck.

A more defensive Ironclad deck revolving around Body Slam is another route you can take. Focus on getting multiple upgraded Body Slam cards accompanied by defensive cards like Shrug It Off. The Armaments card (preferably upgraded) can be a great asset in the beginning of your run.

Note: A Curse can void your Common Sense achievement as it is not considered a common card.

*Apparantly this is not the case anymore, and you can get the achievement with a curse(s) in your deck.

The Transient – Minimalist – You Are Nothing – Perfect

Minimalist: Beat the game with a 5-card deck or smaller.

You Are Nothing: Defeat a boss on turn 1.

Perfect: Defeat a boss without taking any damage.

I have grouped all of these achievements together as you can get 3 out of 4 (if not all 4) achievements in one run with a 5-deck setup containing the following cards: Bash+, 2x Dropkick+, Shrug it off+, Clash+. You could replace Clash for any damage card.

The hardest part with the Minimalist achievement is obviously the removal of cards. Avoid (if possible) getting curses, save your gold for removals and pray to the RNG Gods for lots of card removal events and favourable Relics like the Peace Pipe and Smiling Mask.

A picture says more than a thousand words: 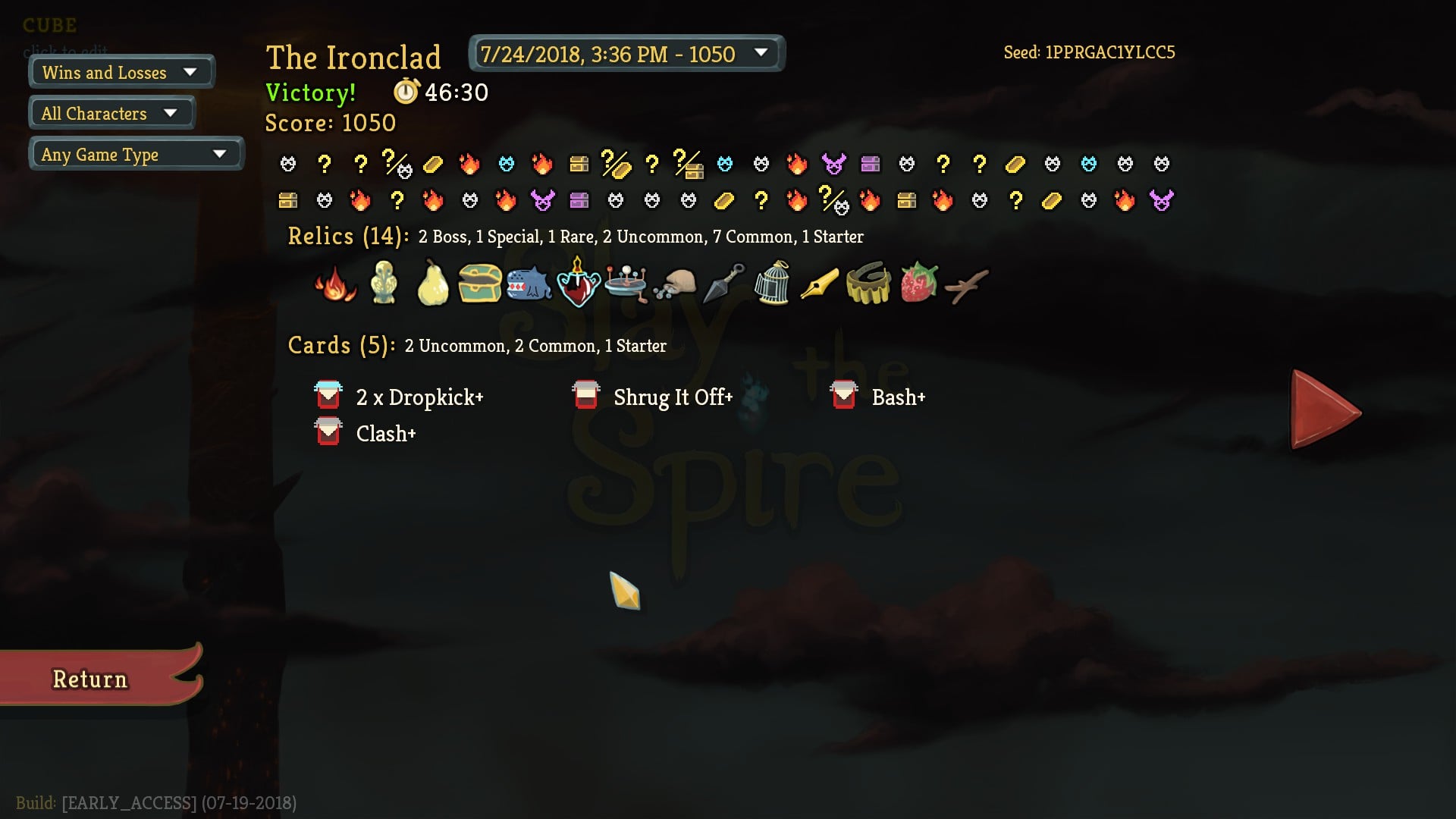 There are other setups viable but if you are able to get this deck you are golden for at least 3 of the 4 achievements as The Transient is a random encounter.

As suggested by Dist there is a simpler way of obtaining this achievement as compared to my method:

You only need the Consume card itself and enough defends against an easy enemy where you can farm focus and not die while doing so. You can use Consume even after you have no orb slots left and you will still keep gaining focus.

A power orientated deck consisting of Creative AI, Echo Form, Defragment and Consume should be the focus of your setup. Creative AI will provide you with several power cards to build up focus. A turtle playstyle with Frost orbs is recommended so you have enough time to generate the needed focus.

Preferably done with The Silent as her arsenal has the most and easily obtainable energy gain and +draw cards. Combined with a shiv setup this achievement shouldn’t be hard to obtain.

Should you want to get this achievement with the Ironclad I recommend a very small deck with a vulnerable debuff to take advantage of the Dropkick card. The above mentioned 5-card deck (Bash+, 2x Dropkick+, Shrug it off+, Clash+) would be ideal, but requires favourable RNG.

Relics for the Ironclad: Ice-Cream, Bag of Marbles, any +energy relic

Spot Weakness, Flex, Demon Form, Rupture (not recommended unless you also have Brutality in your deck) all generate Strength. Combine these with an upgraded Limit Break and you should be good to go. Like many other achievements a turtle playing style to obtain this achievement is recommended.

Another suggestion for this achievement (credit to Caos Spawn):

I wanted to bring you my way of doing plasma achievement. It’s hard but works!
You need a small deck, possibly with Equilibrium, with: Fusion, upgraded Coolheaded and another draw 2+ card.
The idea is to have every card in your hand and to play Fusion then Coolheaded and then draw both again and repeat this process until you are done.

Having 2 or more copies (preferably upgraded) of Cloak & Dagger, Blade Dance and Burst combined with some energy gaining cards/relics should make this an easy obtainable achievement.

A turtle playstyle with a decent amount of poison cards (Noxious Fumes is useful as it debuffs all enemies) is all that you need for this achievement. And of course, a room with 3 enemies.

For this achievement I would recommend going with the Defect. A heavy power orientated deck is what you should aim for. Defect power cards that count towards this achievement are; Biased Cognition, Buffer, Creative AI (helpful if you are still missing certain power cards that you couldn’t obtain otherwise), Echo Form, Electrodynamics, Heatsinks, Hello World, Loop, Self-Repair, Static Discharge and Storm. Combined with relic and potion buffs this achievement should be fairly easy to obtain.

Relic: Blue Candle (should you have curses in your deck)

For me this achievement came naturally as I progressed during the game. Should you have trouble obtaining it, you can apply the following tactic: with your Ironclad at full HP find a slaver enemy in Act I and let him hit you for 3x 7 dmg and 4x 12 damage, leaving you with 1 HP. Make sure to not use Neutralize to not screw up the math.

Personally, I find this the hardest achievement to obtain. As I generally favour the relaxing, non-rush approach I almost gave up on it. My record time was 34 minutes and I generally believed I wouldn’t be able to obtain this achievement. Luckily things got better when fast mode and keybinds were implemented but it still took me 60+ hours to eventually get it.

As for what tactic/character to use, I can only draw from my own experience and after trying numerous builds, I managed to get under 20 min. (by a few seconds) with an Ironclad strength focused build. In my enthusiasm I forgot to screenshot the build I ran with but if I recall correctly Offering, Seeing Red, Clash, Whirlwind (multiple copies), Spot Weakness and Dual Wield were the core of the build.

The easiest way is probably turtling versus enemies that cast Dazed (for example: Repulsor) and wait it out. Alternatively, you can combine the Ninja achievement tactic where you build a deck with lots of Shiv draw.