Earth is under attack. You may have noticed the alien abductions happening around the world. Or maybe there is a sudden surge in popularity in pro-alien factions. Perhaps there are alien life forms roaming in remote areas of nations under your control. Or there is a new UFO crash site.

We cannot sit back and watch. We will need to strike back. It is time to give the aliens an Earthly welcome with gunfire and explosives. But how exactly will you do that?

To kill the alien, you must detect it first. You must complete a few research projects in order to actually see the alien. The research that allows you to detect aliens directly is Alien movements, which should unlock after you have investigated alien abductions and finished the relevant research. 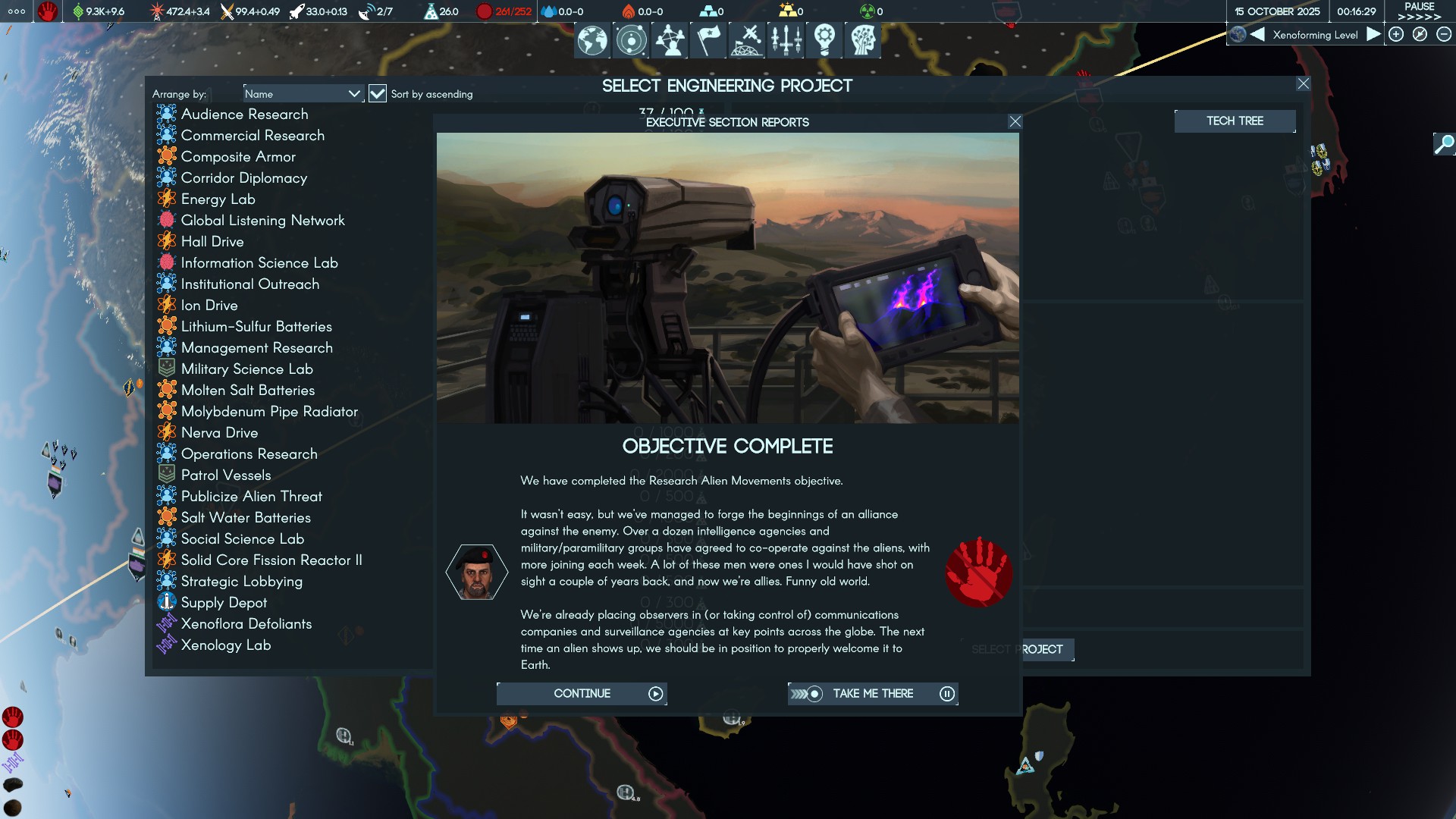 The missions to pay attention to

Furthermore, an additional councilor with the “Surveil location” mission is very useful for pinpointing where the alien is hiding. If the alien is abducting people near the councilor with an active surveillance mission, there is a chance for them to be identified immidiately.

Finally, make sure to stock up on ops. This can be done by buying orgs that give you ops or trading with other factions. Be ready to spend 64 ops every mission phase for a month or two.

There a few ways to find the aliens quickly.

1. Surveillance. Send a councilor with “Surveil Location” to UFO crash sites, countries with sudden increase in servant popularity or previous abduction sites. Keep an eye out for suspicious contacts in the area, especially an unknown councilor that cannot be investigated easily. 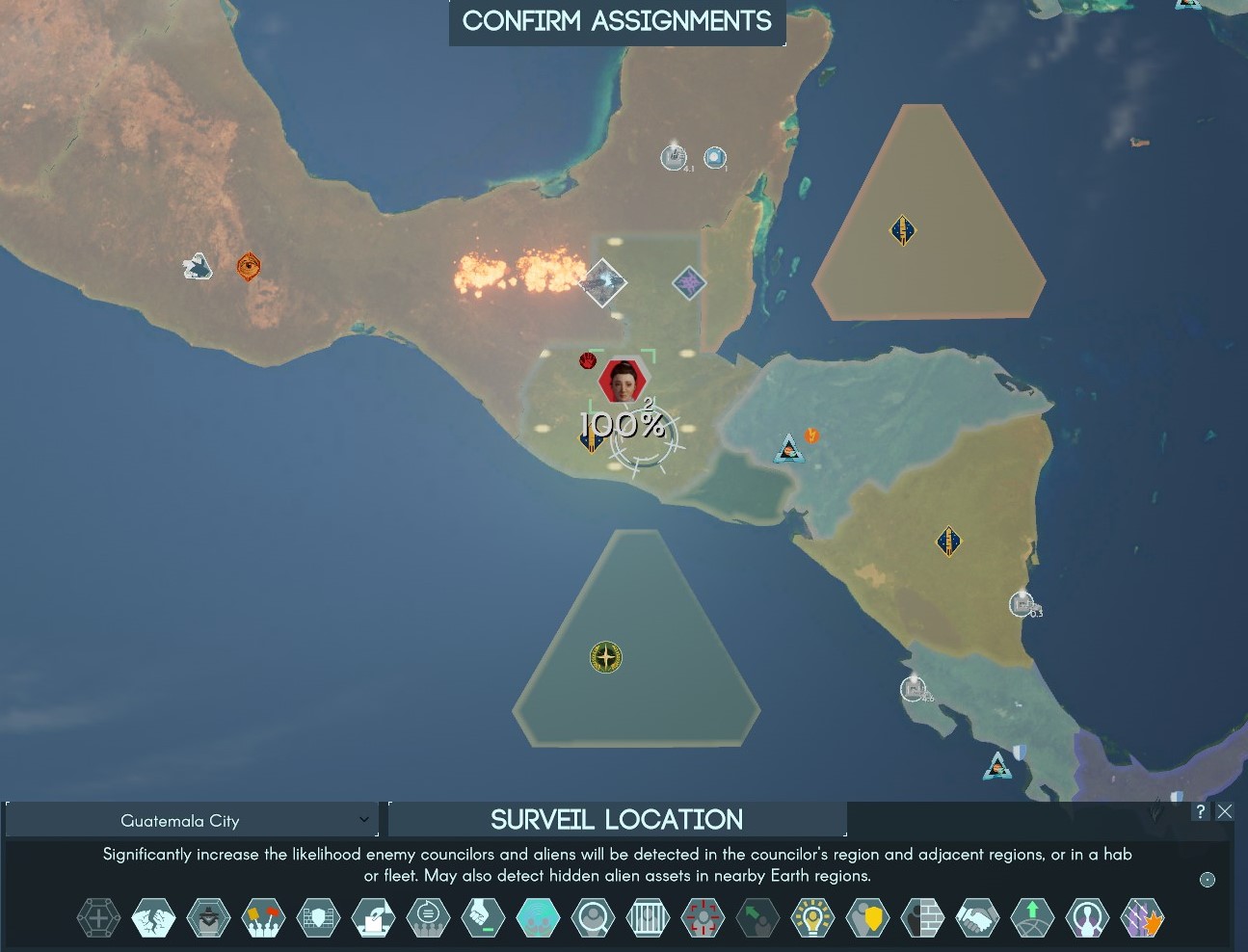 2. Luck. Sometimes the alien just reveals itself. Most likely after suffering a critical failure.

3. Suspicious councilor movements. If a certain unknown councilor only moves one space each turn, it is possible for the said target to be an alien.

4. Xenoforming activity. Aliens can attempt to spread xenofauna. If you find a xenofauna site, it is likely that the alien is not too far away. You can start surveying the area to find the target.

Once you have found an unknown contact of interest, send your investigator (ie councilor with highest investigation stat) in and investigate the target. If it is an alien, you will be notified when the mission is completed.

Upon identifying the alien, it is time to give it a warm welcome with heavy machine guns and sniper rifles.

Pick your councilor with high Espionage. Tell them to Assassinate the alien in the mission assignment phase.

The odds are… not great.

Remember to use the slider on the right to increase the amount of ops you will be spending. 64 ops is basically a must in the early game.

If you really want to further improve your chances, here are some tips.

1. Target the alien when it is in your territory. If you have control of the security forces in a nation, you will get a bonus in attacking the alien.

2. Stack all Espionage related orgs onto your executioner. Buff them up to the max.

3. Investigate the alien for a few times before attacking. You get a bonus (intel on target) for investigating the target for a few times. The max bonus you can get is +5.

4. Save up your ops. Chances are you will need more than one try. Don’t use ops in other missions for the time being.

5. If you have a councilor capable of hostile takeover, use them to target the alien’s orgs. Taking orgs that give bonuses to the alien’s security is a good way of wearing down its defenses.

After your First Kill 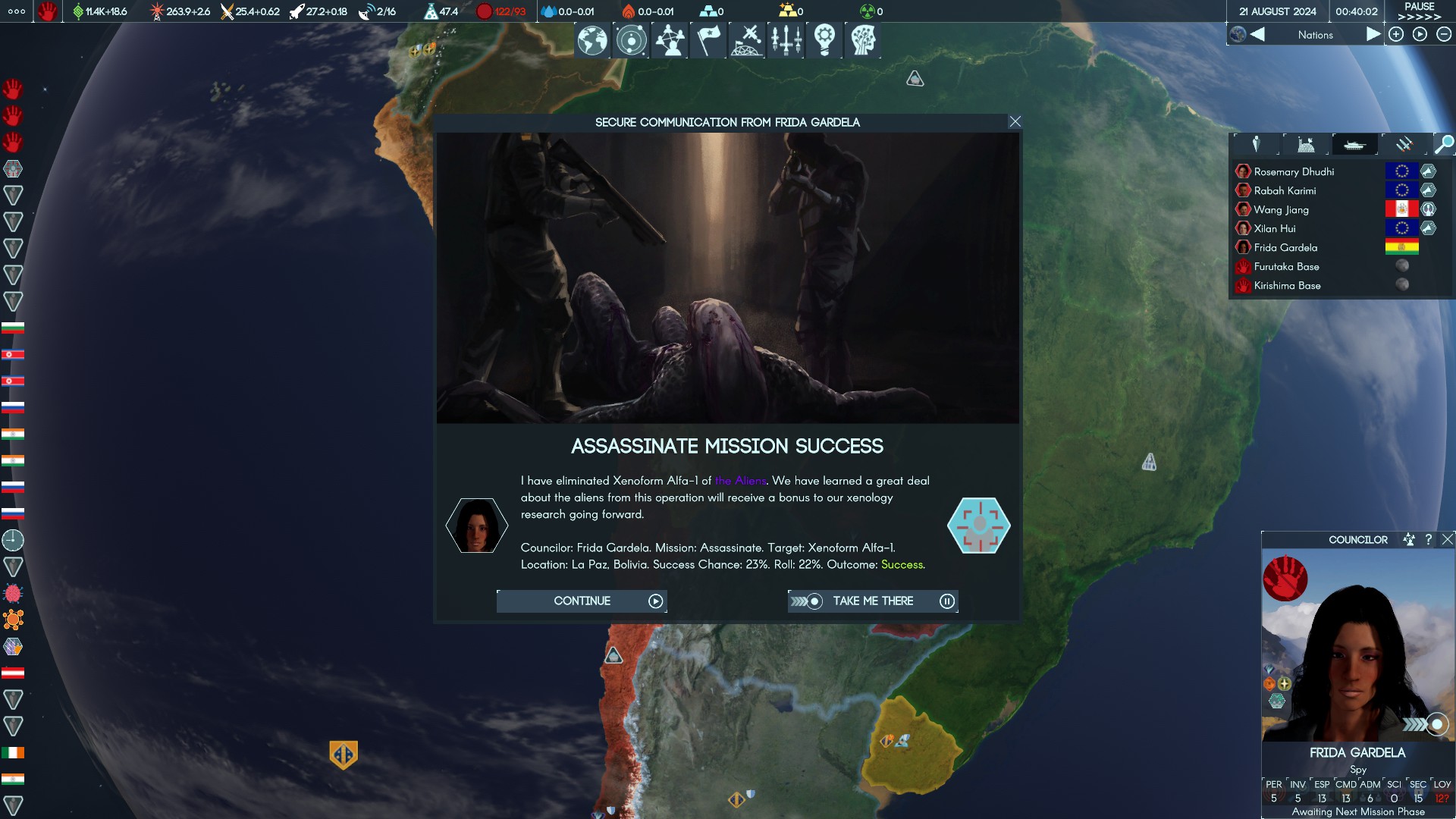 Well done Commander. Great job at getting your first kill.

This will complete faction objectives as you can now dissect the alien’s body. 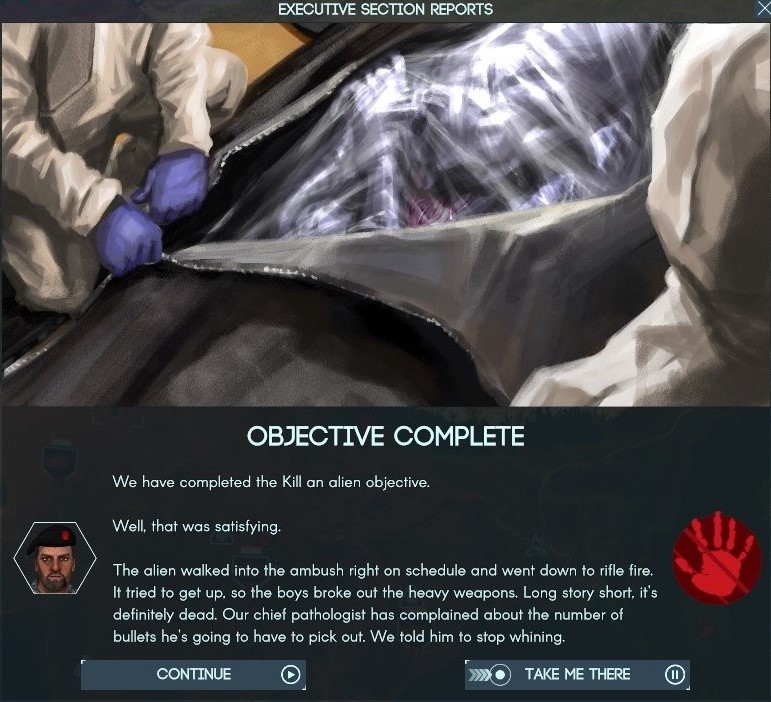 More importantly, the alien is dead before it can finish its mission. That’s right, assassinations are surprisingly good at stopping people from being mind controlled by the xenos. Thus, it is actually beneficial for you to kill sniping aliens.

There 2 things to keep in mind of when killing aliens:

1. Alien hate. The more aliens you snipe, the angrier the aliens get as a whole. They may start bombing you from orbit or attack your space stations directly. Keep investing in military technology to protect yourself from these attacks!

2. The more aliens you kill, the harder it is for you to kill them in the future. The difficulty of killing alien councilors increases according to the number of aliens that you have killed. Keep buffing your councilors with orgs and XP to ensure that you will be able to keep up!

With all that out of the way, you have successfully killed one of the xenos invading our planet. This is a small tactical victory. But a victory regardless.