Like many other things in Taiwu, Cricket have both visible and hidden stats. Without a mod, the hidden stat of a cricket can be difficult to discern, therefore I’ve attached the chinese translation of each stat to make it easier for you to look them up on sites like the chinese Taiwu wiki. (I will attach a list of useful links at the end).

The Showmemore mod will also reveal all the hidden stats in a cricket for ease of reference, so I highly recommend using that if you want to min/max your crickets.

Here is an sample cricket stat panel with showmemore mod: 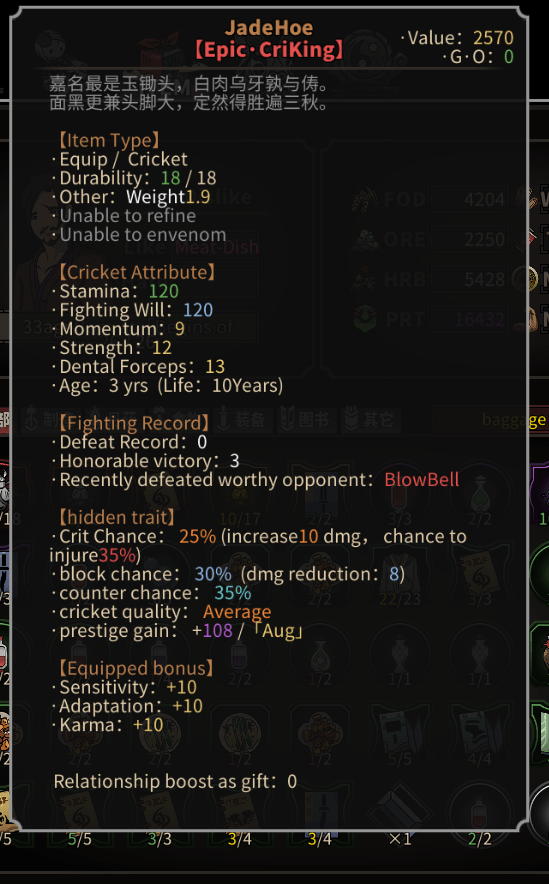 The tier of the cricket, note that this is not indicative of the cricket’s fighting power, as will be explained in cricket generation section below.

The exception being Tier 2 Cricket Kings and Tier 1 Epic Cricket Kings. These are preset cricket with unique stats. As a general rule, all tier 2 crickets are very powerful and can easily handle most lesser opponents. Tier 1 crickets are a bit of mixed baskets, ranging from ludicrously overpowered, comparable to T2, niche with certain abilities, to fairly bad.

In Cricket battle, each tier above your opponent gives you a slight chance to win automatically. Beating opponent more than 3 tiers(not including 3 tier) below you will not count towards notable victory.

This is kinda like the health of the cricket, it has a chance to go down when being critically hit in combat, based on the attacker’s Chance to Injure (击伤概率，a hidden stat).

Missing durability can be recovered by putting the cricket in a cricket jar in Taiwu village, higher quality jar give better chance of recovery per season.

You can actually win a battle by “killing” the enemy cricket by reducing their durability to 0. This is a very niche way to win however, and I dont think it is too practically useful against high end crickets.

The cricket will die upon reaching its lifespan limit, participating in cricket tournament gives you the chance to run into an event to extend the cricket’s life by 1 year for a fee, which may fail.

The “physical” hp bar of the cricket

The “Mental” hp bar of the cricket

Amount of Fighting Will damage inflicted.

The side with greater momentum will get a free attack at the start of the battle, this cannot trigger block, crit, or counter.

The side with greater momentum have 80% chance

Amount of Stamina damage inflicted when counter attacking from your side of the field.

Chance of procing a critical hit when attcking. This can happen both with attacking and counter attacking. Crit hit will additionally inflict Fighting Will damage equal to the attacker’s momentum when attacking. (Counter attack inflict fighting will damage regardless of crit)

This amount of additional Stamina damage will be inflicted on a critical hit.

Chance of reducing the opponent’s durability and inflicting a stack of injury on unblocked critical hit.

Chance to block an incoming attack or counter attack
Blocked damage shows up as yellow letters.

The amount of Stamina AND Fighting will damage reduced on successful block.

This may have to do with whether this cricket can be upgraded to a T1 cricket through the cloth interaction with dragon robe. Need confirmation.

Now that we have an understanding of what each stat does, lets examine how a cricket is generated.

Any Cricket between T9-T3 are generated by matching generating a Cricket color with a feature type.

Each color correspond to a particular tier, but within each color there are various different shades of that color that further influence stats. As a result, a t9 white cricket may actually have very decent fighting power if it is a particularly strong shade of white.

Since color primarily determines Stamina and Fighting Will, you can often assume a cricket with high Stamina and willpower to be coming from a more powerful shade of that color. (Do note some color, like yellow and blue have inherently high Fighting will and Stamina, respectively)

They have highest momentum, high crit and counter attack chance, but low defensive stats and both variants of HP. Making them class cannons that focus on taking out opponents with low fighitng will (as both crit/counter attack triggers Fighting Will damage)

For these guys you want high momentum, crit/counter chance, and at least some HP to survive.

Highest Strength, blocking, and counter attack, very low momentum. These I struggle to find a use for since Strength is only used for counter attacking damages when you are being attacked(not counter-counter), and they have low crit chance to do damage.

Technically you can probably punish a glass cannon attacker like white or red, but against higher tier opponents they just dont do enough damage or have the HP to last.

Highest Forceps, crit chance, chance to injure, and crit damage. Very low HP stats and no blocking. Basically your beserker to dps down anything in their way, tends to get messed up by colours with good block and counter, or just enough flat HP to outlast you.

These I tend to prefer as their balanced stats means whatever feature you land with will give you something that is fairly decent provided the base stats are good. Unlike say, landing a White with a feature that increases Forceps, which will do it little good.

The Fighting will tanks, massive amount of fighting will and good amount of strength for counter attacking. Will destroy whites, even the T2 White king if they have decent stats.

They usually have pretty poor offensive ability besides countering however, and therefore are probably not gonna outlast some T1/T2 tanky bruisers with good Forceps/crit chance. But can be good if you land one with even more strength/forceps.

The Stamina Tanks with highest Stamina, good blocking and damage reduction. They are in my experience a bit worse than yellow because of their relatively low Fighting will and horrible crit chance. Then again, they will mess up reds the same way yellow will do to whites.

But since these can often get to 200+ Stamina with decent Forcep/Momentum, its more than enough to plow through most lesser foes at that point.

Features make up the second part of a cricket’s name.

The game will pick the highest tiered part of a cricket to determine the cricket’s tiers. So a blue cricket with a trash shade of blue and trash feature will still be T4 by virtue of being blue, which is something to watch out for. (But a T9 white, even if its the strongest shade of white, is probably still not very good since it is also stuck with a t9 feature)

There are three types of Features, each Cricket can only have one feature.
There are 18 features under each type, spread between T9-T3 (Since there is no color corresponding with T3, a T3 cricket always have one of the best features, but may still be a weak shade of its color)

There are also several other category of minor features like legs and eyes, which have different combinations of stats. Overall though the above three are probably the most useful main categories to look for.

With all the above said, what are some of the generally good choices for crickets and cricket battles?

First of all, I’d recommend not fight top tier NPCs unless you are really desperate for certain item they carry. (Even then there is no gurantee that they are going to wager that particular one) It is often best to look for Merchant or Doctor NPC that have a huge amount of cash on hand, these guys will usually only run crickets up to t5, making things a lot easier.

Limiting things t5 also excludes tanky blues, a strong phyiscal attacker/brawler are generally best suited for the job, but anyone with good stats will do.

Here is several archtype in mind.

Purple/Blue or maybe Yellow with good HP reserve(100+ of stamina/fighitng will at least, 150+ for Yellow/Blue even better), teeth feature with good forceps (8+ will be nice). Basically a safer version of the Red above, more durable to survive long fights against tanks, still have enough crit to potentially punch above their weight. Purple is probably the best for this type of build, and should do well if you stay out of cricket king territory.

Yellow/Blue with 200+ HP and at least semi decent Momentum/Forcep (5+ perhaps? Good amount of strength/counter chance can compensate), basically the best way to deal with Red and Whites with good stat. You are simply too tanky to die as you walk over their usually pitiful HP pool.

A counter-attacking black may work well in this role too, but I havent had much success with them.