Skip to content
Home > The Surge 2 – Little Johnny How to Beat?

Little Johnny How to Beat?

Little Johnny is the first major boss you run into in The Surge 2. You are asked to take care of him by his brother (family, right?). You need to make your way through Terminal Z, opening up all the shortcuts as you go, to give yourself an easy run from the Med Bay to the boss fight, because you might need it.

The main aim of the Little Johnny boss battle is to destroy five coolant tanks, ultimately overheating and destroying the mech. There’s one tank on each of the mech’s three legs and two tanks at the core which houses Johnny, with the latter being the hardest to handle and consequently the best place to start. (Nobody wants to spend time successfully handling the legs only to fail at the final hurdle, after all.)

First things first: If you’re a fan of heavy-duty, lumbering two-handed weapons, you’re going to need to switch up your loadout. Johnny’s mech is very mobile and quite disorienting in its tumbling, unpredictable movements, which means that by the time you’ve wound up a swing, it’ll most likely no longer be on-target when it gets unleashed. You’re looking for something fast—ideally a twin-rigged class weapon, as they’re the quickest available—and to be highly aggressive in order to accrue power to charge batteries, which can then be used to power the healing injectable and keep you in this marathon fight for longer.

As such, equipping any implants that help to increase your power gain and/or negate battery drain comes in very handy. Even with this ideal loadout, you can’t be too greedy and should aim to land around two hits at a time.

Now that the core has been dealt with, it’s time for the easier task of tackling the three legs individually. There’s a lot of open space in this boss arena and you’ll need to utilize that to try and remain central, as getting pinned up against a wall or in a corner has the potential to be lethal. Canceling your lock-on can be useful on occasion in order to gain control of the camera, gather your bearings, and reposition, as the legs are a huge and moving target which can make it easy to get lost when the camera is set to automatically follow.

Johnny will still use some of the aforementioned attacks, but now you should already be equipped to handle those and can instead elect to attack the nearest leg. Due to being farther out of range, he’s now far more likely to stand up tall and drop numerous electrical mines that spread around the battlefield, though. These deal damage and temporarily impede your movement when triggered, but dodging over the top of them (or, of course, being careful to avoid them) negates their effects.

By standing between the outgoing streams of mines as they deploy you can get some significant damage in while the mech is preoccupied, so feel free to exceed the two-hit rule here. Make sure to target the left and right side legs, as there’s a cheesy little trick to get the back leg basically for free.

By staying directly behind the leg and attacking it, you can repeatedly bait out a backward thrust from the pod that’s laughably easy to dodge before closing the gap and repeating the process. If you saved this one for last, boom goes the mech, and The Surge 2 Little Johnny boss will be a goner.

In order to have these two-hit windows on the mech’s core coolant tanks present themselves, you’ll want to stand directly beneath the airborne core pod and maneuver yourself to stay just there as the robotic legs perform two consecutive strides, after which you can sprint over to either of the tanks and get your digs in. From here the pincer-like arms on the pod may unleash a swiping attack, in which case a backward dodge will put you out of range. This is also the tactic to employ if you see the pod raise up in preparation for a ground slam, after either of which you can close the gap and land another flurry

It’s also possible that the pincer arms will perform a forward lunge or that the mech will spew toxic sludge directly ahead, both of which should instead be dodged to the side. This maneuver should place you beside either the right or left leg, presenting a good opportunity to land a couple of free hits on those before shifting your focus back to the core.

With knowledge of how to avoid and counter the relevant attacks, you should soon have mastered taking out the core coolant tanks. Do be aware, however, that any destroyed tanks will begin emitting noxious gas, so be sure to adjust your approach on the fly to avoid the visible clouds. You don’t have to perform perfectly, as you should earn plenty of power if you’re being aggressive enough, the likes of which can then be used for frequent heals and even banked up to three times to be used for additional health gain later. 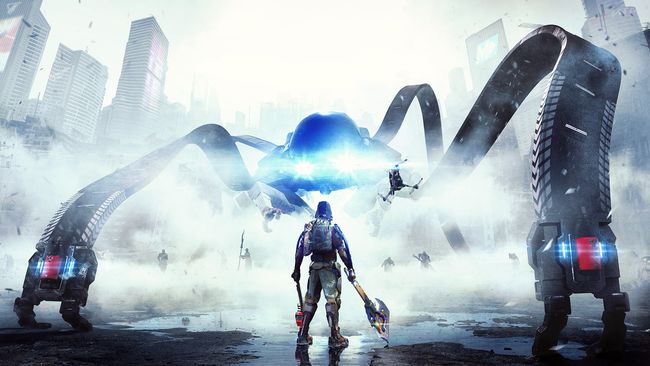