Welcome to our Victoria 3 What your Generals are doing guide. Explanation of what is going on under the hood to make the combat mechanics operate, like why your general is only attacking with 3 of 300 battalions or why you only captured one province after a battle.

We know that there are people who have a hard time finishing the Victoria 3 game. If you are one of those who find it difficult to finish the game, let’s take you to our Victoria 3 guide.

Victoria 3 What your Generals are doing

So you bought Victoria 3, you started playing, you got into a Diplomatic Play that escalated to war, and now you’re wondering why your generals aren’t doing what they want to.

The developer diaries and the Victoria 3 Wiki explain the general thrust of the mechanics but they don’t reveal the specifics. This guide will cover some additional information from the game files that sheds a bit more light on what’s going on.

There are two rules for how fronts are created:

In this example I only have one front with the East India Company, even though I have two borders with them. That’s because their land all connects together. 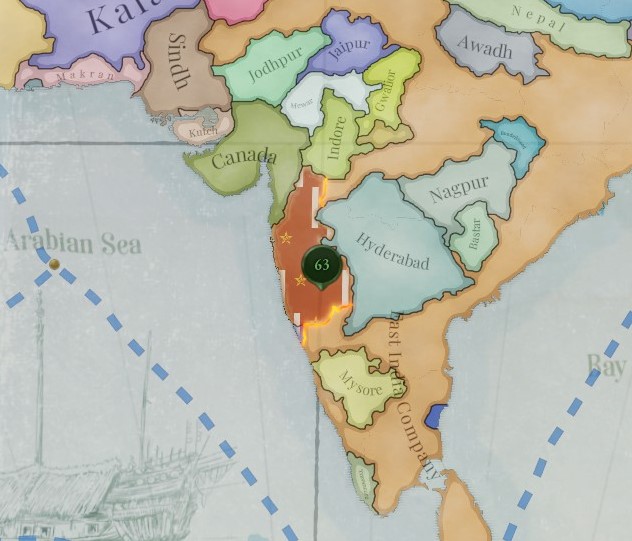 Each general can be assigned to exactly one front. If they advance or retreat and that creates a second front, then the generals on both sides will pick one of the fronts to fight on. If the enemy had two generals on that front and you only have one, then one of their generals will be able to push unimpeded. In large wars, then, it’s always better to have more generals than fronts in each theatre, so you always have someone to reassign if new fronts emerge.

Troops cannot currently be destroyed in encirclements in the game; if a pocket is cleared out, the generals defending it will move to the nearest remaining front. This is annoying when it saves an AI army, but helpful when it saves your army from a boneheaded mistake by one of your own generals.

If at least one general on a side of the front is set to “Advance Front” and there is no current battle on the front, then that side will gain progress toward starting a new battle. This is almost always +10 progress per day, reduced by 50% if the defending side has a general set to “Defend Front”.

When the meter reaches 100% then the battle starts. By default every province on the defender’s side of the front is equally likely to be the site of the battle. Provinces get their probability of being selected modified:

Capital Bonus is 10. Wargoal Bonus is 10 if the province is in a wargoal state; 6 if it’s in a state bordering a wargoal; and 3 if it’s in a state adjacent to one that borders a wargoal. This means that if you’re trying to take the enemy capital in the war, provinces in the capital state would be 100 times more likely to be the site of the next battle than other provinces with the same terrain and infrastructure.

If neither side has a general set to “Advance Front” then the two sides will just stare at each other and take attrition. If your units are fully supplied and assigned to a front then they take an average of 2% casualties per week due to attrition. If they’re on “Stand By” then they’re living in barracks and don’t take attrition. 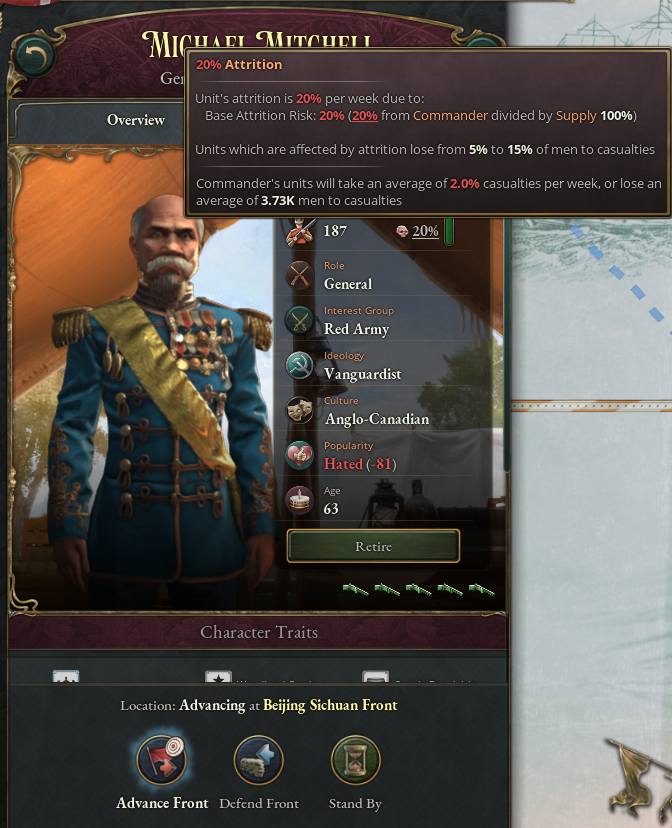 How your general picks how many troops to bring

First the game picks which general is going to command each side. The generals are weighted by the number of troops they command, and the weight is increased if they have the corresponding attack or defence order.

The baseline is capped based on the terrain and combat width. The formula is:

Terrain Combat Width is a value between 0 and 1; it’s 1 in plains, 0.3 in mountains, and somewhere in between for other terrain types. So if the battle is in a state with 10 Infrastructure (common in low-population areas) and it’s happening in mountainous terrain, the cap is (5 + (10 / 2)) * 0.3 = 3 battalions. If these low-infrastructure mountains are the only place battles can happen on that front, then the baseline will always be 3 battalions for battles on that front, until it moves to better terrain/infrastructure.

Further modifiers are then applied to the baseline:

So as an example, for this front there’s a battle happening in some Plains: 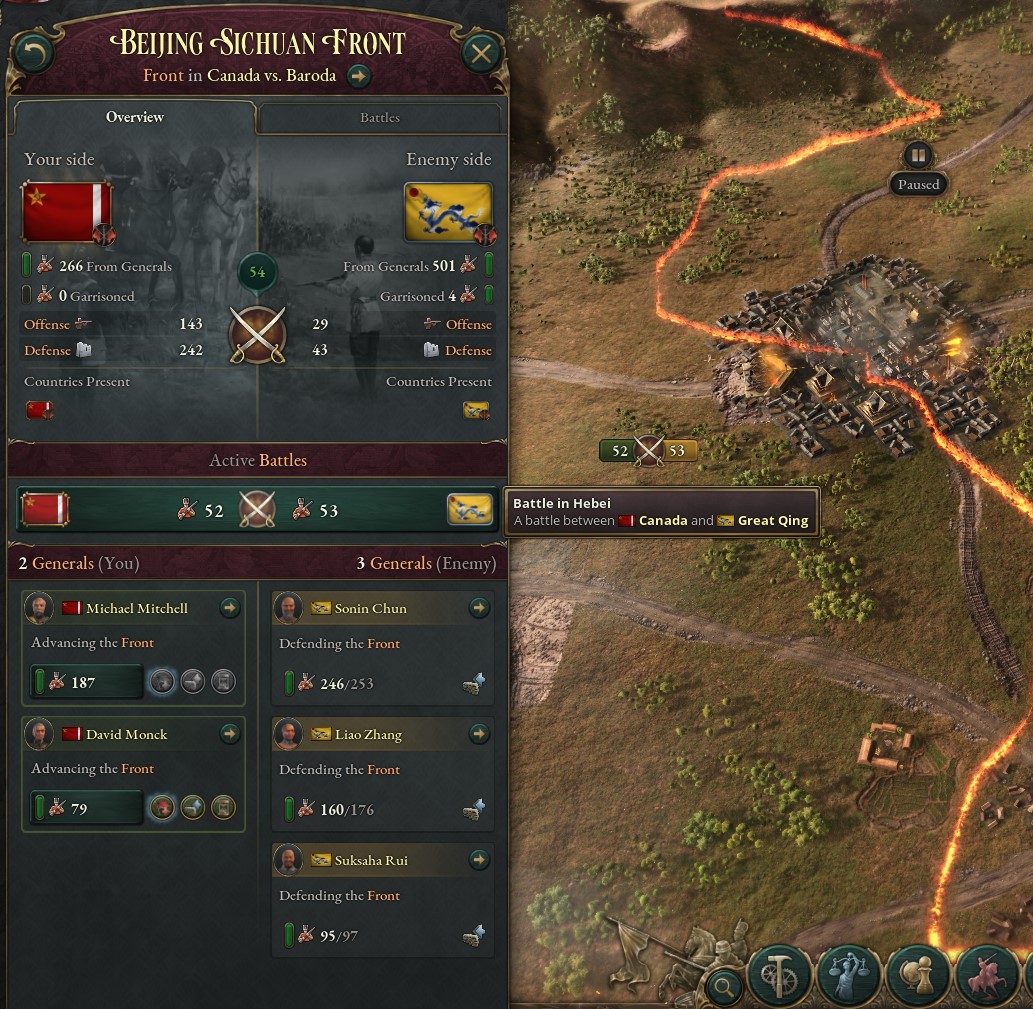 Victoria 3 What your Generals are doing

It’s happening in the state of Hebei, which has 113 infrastructure right now in my game. So the terrain baseline cap for both sides of the battle is:

The attackers have better stats so they don’t get an increase.

Lastly, the attackers get reduced by up to two-thirds and the defenders get reduced by up to half. So Canada could have brought anywhere between 0.33 * 61.5 = 20.5 and 61.5 battalions, and 52 as shown in the screenshot was a pretty good roll for my generals. Meanwhile China could have brought as many as 122.9 (if they got the maximum value for both rolls) or as few as 30.75 (if they got the minimum for both).

The commanding general will always draw from their assigned troops before borrowing any from other armies on the same front. When they’re deciding which allies to borrow from, they’ll borrow more troops from their own country than from allies and they’ll prefer borrowing troops with higher morale.

Each round of combat inflicts casulaties on both armies. The attacking battalions inflict more casualties and receive fewer casualties if their Offense is higher than the defender’s Defense, and vice versa. The damage inflicted is scaled based on the remaining manpower of the battalion doing the shooting. Each battalion targets at most one battalion on the other side. I haven’t confirmed whether more than one battalion can pick the same target yet.

In this example I’m inflicting disproportionate casualties despite having been outnumbered over three to one at the start of the battle; this is due to the stats advantage.

Casualties can be either Dead or Wounded. By default 75% are Wounded and the rest are Dead. Some of the Wounded will rejoin their unit while others will become Dependents of a pop somewhere in your country. The number of Dead is reduced by having better Medical Aid production methods for your units, and it goes up if the opposing army has a higher Kill Rate (from better artillery PMs, Machine Guns, Flamethrowers, or Chemical Weapon Specialists).

In the screenshot above, 85% of my casulaties are surviving the battle, and only 74% of the Chinese casualties are surviving. This is because, while we both have good medical branches attached to our armies and giving a boost to Recovery Rate, my Kill Rate is a lot higher:

When a battalion takes casualties, it also loses morale. Morale is effectively a multiplier for the manpower of the unit; if it has 50% morale then half of its troops won’t be taking part in the fighting.

Morale is also reduced by having low supply for the army. This can keep an army stuck at 0% morale, in which case it auto-loses battles as soon as they start. You can push a front very fast when this happens, so convoy raiding to cut off supply to a front can be very powerful.

Battalions leave the battlefield if they are reduced to zero morale or zero manpower. The battle ends only when one side has no battalions left on the field; there doesn’t appear to be any mechanic for retreat before this point.

Battalions can reinforce during the battle, if the building they come from is able to hire people to replace the casualties.

What happens after the battle

If the attacker wins then they advance a certain number of provinces into opposing territory.

The number of provinces taken appears to depend on:

Some barracks Production Methods have an effect too:

So if you’re confident that you can win battles easily against your foes, selecting Chemical Weapon Specialists is counterproductive because you will still win with Infiltrators and you’ll capture land faster.

Tips to Victoria 3 What your Generals are doing