This method of focus farming uses Adaro, Sedna, an exterminate mission, and Equinox’s’ night-mode sleep ability to keeps enemies un-alerted while killing them to get-and keep-the stealth multiplier, as enemies put to sleep by equinox stay unalerted when a Tenno is in front of them or a nearby enemy dies. This method exploits that to keep that going throughout the entire mission, sleeping enemies to stay unalerted and get stealth multiplier affinity gains, with a Focus Lens on Equinox and the weapon used to maximize focus gains, and this guide explains how to build Equinox and your melee weapon of choice, and how to use them to maximize your focus farming efficiency.

The Equinox build is straight forward-a night mode sleep build for her 2 ability. What’s needed most is range and duration, however the build can be flexible, but keep in mind

Lower range requires more use of the ability-and therefore more energy, and will also make the run take a bit longer

Lower dur means you have to be killing them quicker-higher chance of a mistake being made and an enemy being alerted(which is one of the worst scenarios-an alerted enemy getting killed will reset the stealth mutiplier and lower focus gains signifcantly until it gets back up).

Generally, maxed range(250) is ideal, but if mod space is an issue, dropping cunning drift in favor of more efficiency or duration is not a bad choice, the build I use is: 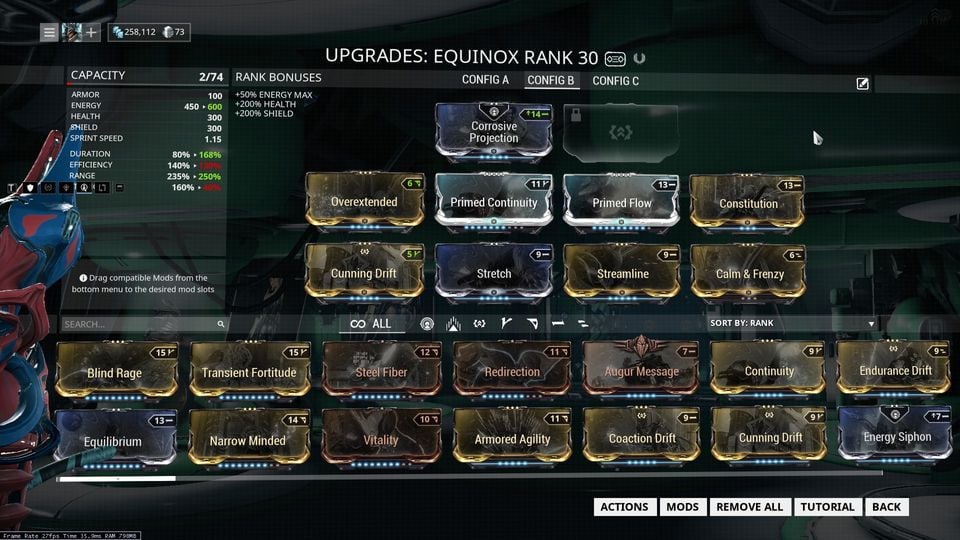 The augment isn’t needed, but can be helpful in certain situations, such as if you forgot to sleep a single enemy you can simply kill one next to him; saving you energy and time, and also saving you from him getting alerted.

For energy, I use Zenurik’s Energy Overflow, and it keeps me well supplied with 130% efficiency(maxed out at 5 energy/s), but if you’re new to focus farming or simply don’t like/use zenurik, energy restores will do the trick just fine, just require some more resources.

Now, on to the melee build

The requirements of your melee are more flexible than the Equinox build.
The only real requirement is: it must be able to 1 shot a level 36 bombard on a finisher
The reason I say level 36 bombard is that will be the toughest enemy you fight at Adaro. It’s possible to do a finisher and not kill them and they will also stay asleep, but it is luck-reliant and not consistent, and results in significant losses to affinity and focus.

After the base requirement, the best/most efficient way, is to have a weapon one shot an enemy without a finisher, as it is much faster than going thorugh ~130 finishers for 1 run.
However, when an enemy is asleep by Equinox, they are open to finishers, so you must be far enough away that the indicator for a finisher doesn’t show up, by using a weapon with more range, be it innate range or a weapon with Reach/Primed Reach.

Any weapon will work, but the best weapons are among polearms and whips, as they have the highest innate range. This allows for easier killing without accidentally getting into finisher range, and killing more enemies at once and therefore quicker runs.
The actual weapon itself doesn’t matter much, as long as it can kill the enemy in one hit. Guandao, Orthos Prime, Atterax, they all work. Pick your favorite.

For the build, any build will work as long as the weapon can 1 shot level 36 enemies. The only mod I would say is required is Primed Reach, if you don’t have the Primed version, regular Reach will work, simply to a lesser effect.

Now with your builds in order, on to actually doing it.

When killing enemies with a weapon, 50% goes to the weapon used and 50% to the warframe, therefore, to get the most out of your runs, putting a lens on both is the best plan of action.

Better lens: More focus, obviously. Nothing to be said about that, just put whatever strength lens you want/can for this; Regular<Greater<Eidolon.
Affinity to Focus: 1.25% < 1.75% < 2.25%

When getting down to the killing, it’s rather simple. To sum it up:Put the enemies in the room to sleep, kill them, and move on.

If a focus orb pops up(5x Affinity to Focus conversion rate for 45s), immediately stop killing, sleep all enemies from you to the orb, and proceed with killing.

On bigger rooms that you can get in one go, or if you don’t have a lot of duration, split the enemies into groups and focus them one by one(perhaps use 1 cast and kill all enemies from that 1 cast of Sleep, and move around the room methodically).

An alerted enemy means lower focus, and should be avoided at all costs, focus your efforts on sleeping the enemies before killing them, the stealth multiplier is the reason for the high gains, and an alerted enemy resets that!

Equinox Build: Focus on Duration and Range, augment not required, Efficiency where possible.

What to do: Sleep a room, kill a room, move on.