Welcome to our Wayward How to Survive guide. A guide on how to survive early on without spoilers. Useful if you feel like you’re stuck or that you’re constantly dying.

Wayward How to Survive

A guide on how to survive early on without spoilers. Useful if you feel like you’re stuck or that you’re constantly dying.

Welcome to Wayward! First and foremost, know that there is a tutorial that is packaged with the game. To access this, click the message stating “Welcome” on the bottom left of your screen. It’ll teach you some of the basics, while simultaneously not teaching you some of the basics. I’d recommend that, for the purposes of this guide, that you use it, mainly for the purposes of familiarising yourself with the controls, how to craft items, and similar things. In addition, the journal/notes on the top of your screen that your character writes as you expose yourself to the dangers and goods of this world provide good but slightly cryptic hints that you need to take into account when traversing these lands. It’ll have a big red sign on it when your character has experienced something new, so do keep tabs on this part of the screen.

The basics: Food, Water, and the dangerous Reputation mechanicThe tutorial is capable of explaining the basics of getting food and water, however it fails to explain a mechanic known as “Reputation”. In fact, following the tutorial blindly will likely result in your death as a result of this mechanic. Reputation is probably the main cause of death for newer players, once they’ve managed to secure basic food and water. Essentially, cutting down trees, mining stone, killing peaceful creatures, as well as crafting combat-related equipment, will lower your reputation. Once the reputation is in the negative thousands, hostile creatures that you simply cannot defeat yet will frequent the surface. As such, until you have at least made a full set of armour (That is not the common bark armour), try to keep the reputation up in the positives. Do not unnecessarily excavate stone, or chop trees, as it will merely result in your eventual demise due to coyotes chasing you down in the night. Similarly, try to stay above ground, as the caves contain creatures, irregardless of your reputation, that you will not survive against without at least metal armour. In fact, you may even find it easier to sail to other islands before you slay the creatures of the depths.

The question is, how do you generate food and water without lowering your reputation? That, I intend on answering right here.

Out of these three, the latter two will contribute positively to your reputation (Though if you hunt spiders or giant rats, you will also gain reputation from these). To add to this, farming is dependent on what you manage to find on your island. It is very likely that farming will not manage to sustain you in the early stages of the game. Thus, you practically have to turn to fishing. Now, how do you do this?

More Wayward How to Survive

Well, there are two main ways to get started. One is to craft a fishing rod, and the other is to gather more resources, and craft a net. Both tools require you to get certain resources in order to craft, and while the fishing rod can reach a bit further into the seas, it has a lot less durability.

The fishing rod requires a bit of string, which can be obtained by stripping a piece of wood bark into stripped bark, which can then be crafted into string. It also requires a needle, which necessitates that you’ve found some bone fragments, that dismantle into a bone needle. Alternatively, you may have killed a giant rat, which when butchered has a chance of dropping an animal fang.

The net is similarly complicated, requiring a lot more string, as well as stone. Stone can be gathered by dismantling any granite that you have mined, or commonly found by digging up granite tiles.

While you will lose a bit of reputation gathering the resources required, once you start fishing, you will find that your reputation skyrockets.

Once you have crafted either tool, you can start casting your line or net into the water. You will mostly find that you catch seaweed. It, as its flavour text suggests, can be eaten, but it might be better left off as cordage for future string that you may need for any future crafting you may do. Eventually, one of two things will happen: You either catch a fish, or you spot a shark. If you spot a shark, move to a new location and continue fishing, as you will probably take heavy casualties attempting to kill them in this state. If you catch a fish, great! Now you can take it to your campfire and cook it, and then enjoy a nice and hearty meal.

As a bonus, you may even find that you manage to fish up a piece of armour or two, or even additional bottles that’ll help you get your water production going.

As you continue fishing, you’ll find that you will have an easier time catching fish. Eventually, as you obtain several armour pieces, you should make sure to kill any sharks that spawn as a result of fishing. Killing them improves your reputation and, once butchered, they’ll yield two pieces of fish filet, which also furthers your goals of sustaining yourself.

Don’t I need water as well?Well, yes you do! There are three ways of staying hydrated that I have discovered so far:

The first option is, much like in the food step, dependent on what you find on your island, and will likely not be enough to sustain you initially. The second is similar in that freshwater is very limited, and again dependent on what you find on your island. Therefore, the final and third step, is what you must do in order to stay alive any sustained period of time. To do so, you need to create a still. To do so, you will require some string, some granite, and a stick. This still requires a lit fire underneath it, and this fire will function for the purposes of cooking food, and can be lit so long as there’s salt water in the still, and a container attached to it. Therefore, if you wish to save your reputation, you may want to pick up and dismantle your campfire from the tutorial section to obtain the necessary granite. 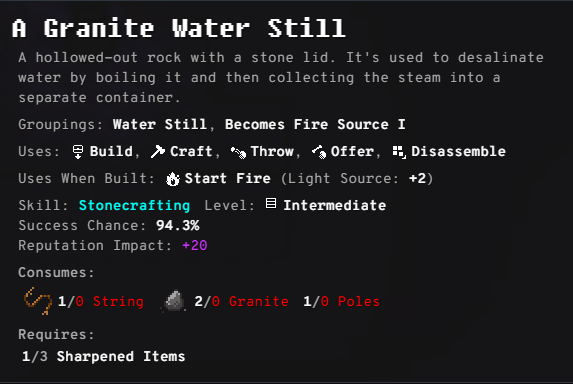 It might be tempting to create more stills, but it will require multiple water containers to maintain. Currently, only one crafting route will allow you to create more early on, which competes with your ability to craft armour to protect yourself. As well, you need a good chunk of firewood in order to maintain multiple fires, which results in a lot of negative reputation gain.

What’s next?Now, you are set with food and water! Make sure to return to these tasks every now and then, and supplement your food and water production with slain spiders & giant rats’ meat (Though make sure you make pemmican out of the tainted meat so you don’t get poisoned eating it), as well as some farming. Once you’ve secured some water production, look for and dig up some limestone, while simultaneously digging up some of that shore sand, or dismantle gravel, so that you can look into glass production. This’ll let you upgrade your water production facility to not require constant use of fire, while also providing means to create more water containers, in conjunction with clay.

In order to get started on armour production, head to the next section of this walkthrough.

Protect your Vitals! – Crafting your first pieces of armour

Now with basic food and water production set, you will now want to look into the production of leather armour. You may have already picked up some pieces of leather armour through fishing, so it is time to now complement these pieces with new armour.

At this point, make sure you’ve created a chest: Dismantle some logs and a stick, and this recipe shall become visible to you.

Prior to metalworking, there are two main types of armour that you can craft at this point in time:

The fur set is the next upgrade to make at this point in time, but none will be visible without knowing what to dismantle. It is time to get into leatherworking. Once you’ve killed your first animal with fur (most likely a giant rat that prowled on you while you were sleeping at night), butcher it to obtain an animal pelt. Dismantle it to obtain both animal fur, as well as animal hide. You can also kill goats, rabbits and other animals to obtain their prized fur, but do note that it comes with a hefty reputation malus. The fur itself can also be worn for a small defense bonus in the earlygame.

The fur will prove useful in crafting the fur set in conjunction with additional animal pelts. This set contains three pieces to my knowledge and will prove an excellent replacement for your currently tattered clothes. Alternatively, you crafted some fabric using leftover cordage, which you’ve sown into some clothes. I wouldn’t recommend wasting this fabric on clothes, but you can always dismantle it back to fabric to later use in other recipes.

While you are gathering animal pelts, you may notice that you’re also obtaining animal hide from dismantling it. It is currently unusable in its current for for leather, and will need to be tanned. To do so, create some tannin powder, crafted from wood bark in a mortar and pestle. With this tannin powder, you can cure the leather, thus allowing you to craft leather armour. You can also craft waterskins, backpacks and bags with leather, all of which are useful tools to let you carry more on your expeditions.

A lot of the leather armour will require a fairly high skill level, but do keep trying as you will eventually succeed in crafting the armour piece. It can always be repaired later on with a hammer or similar, if it is about to break.

Once you’ve armoured yourself, you should be capable of defeating the sharks while fishing, as well as some of the early enemies that spawn as a result of negative reputation. The caves are still dangerous however, and I’d recommend crafting some metal armour before you even attempt to kill any of the enemies below ground.

Once you’ve obtained enough pieces of armour, you can now start thinking about going for some metals. Metalworking as a process requires a kiln, an anvil, the ores themselves, as well as several flux elements that need to be ground into powders with a mortar and pestle. Be extremely wary however: Any metalworking will result in major negative reputation maluses, and if you do not keep track of your reputation meter, you may find yourself at the mercy of powerful foes you cannot yet defeat. You can then also craft more powerful tools, but I’d advise keeping the metals you craft for armour and weapons only.

At this point, you should now be able to properly explore the world of Wayward. Good luck in your ventures!