Perks are a critical part of any build and can make all the difference in some situations. Perks are unlocked by spending perk points earned through completing milestones. You can access the perk store and milestone page from a terminal inside your room. Perks are then equipped in the upgrade screen. 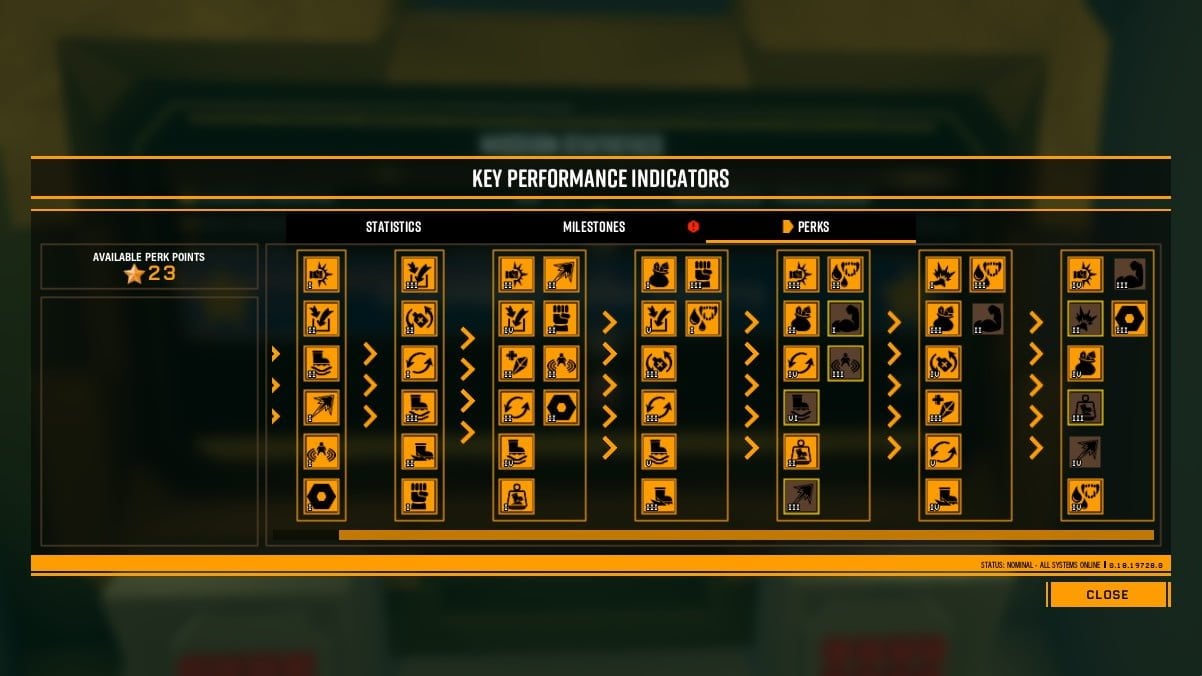 Considered to be one of the strongest perks in the game, if not the strongest by many. It gives you a full 9 seconds to get to red sugar or another healing source to revive yourself. Not only can it be used to revive yourself, but you can revive others players to. Scouts can use their grapple hook to easily get healing, while gunners can use those 9 seconds to throw down a shield.

For those playing multiplayer, the field medic can make all the difference. On higher hazards the longer you stand still the more chance you will be turned into bug food, so minimising that time is very useful to make sure you revive and don’t go down. On later levels, the medic perk also scares enemies away after reviving, making it an incredible space building tool.

With increased movement speed of enemies on hazard 5, having extra speed yourself will let you outpace projectiles and bugs easier giving you more space. Especially useful on gunner considering the slow that comes with his primary weapons. The impact this perk makes is massive, and shouldn’t be underestimated.

An extra way to gain health. While it won’t make melee viable, it will give you the opportunity to turn the odd bug into an extra 5hp. Be careful not to lose more hp than you gain, a common pitfall of this perk. However by using jump to cancel the slow of the pickaxe, you can gain more use out of this perk. [See Tips + Tricks – Jumping and Kiting]

Increased melee damage is fun, more so when combined with skullcrusher ale but it isn’t viable for increased hazards due to the slow that comes with meleeing an enemy putting you at risk from projectiles and attacks.

Great for lighting up caves but doesn’t do much to help you deal with hordes of enemies.

A borderline useless perk in most cases, since throwing aquarq and other gems is quicker than carrying even with strong back. [See Tips + Tricks – Gems]

A useful perk for solo and duos as a single cave leech can end your run. Loses effectiveness with more players as someone can shoot you free.

Very useful if you have a group of friends who really don’t understand the concept of friendly fire not being so friendly. Can have use in normal matches and on higher hazards due to increased friendly fire but isn’t a major boost.

It’s a nice time save, isn’t amazing however. The resistance isn’t too useful as you have to really hug molly, and in most cases you want to be kiting when the situation gets bad.

A really useful perk for increasing the speed of mining and a huge quality of life improvement, however doesn’t help you stay alive much.