Where is Kanawha Nuka-Cola Plant?

The Kanawha Nuka-Cola Plant is a manufacturing plant in the west central area of Appalachia. It is located to the south of Lewis and Sons Farming Supply, and to the north of the Camden Park.

It is one of the Locations found in The Forest of Appalachia, and is not known to the be the site of any quests.

Found any workshops, bobbleheads, or collectibles? Let us know!

Through the main entrance is a small reception area and proceeding forward up a small staircase and through a large doorway there is a large open lobby consisting of numerous labs and tasting areas, there is one lab on the right of the room next to a tasting area and a utility tunnel leading to the factory floor while on the left is a storage area. Around 5 Scorched spawn in the main lobby area. There are two staircases on the right and left leading up to the labs and catwalk and at the end of the lobby is another doorway leading to the factory level, a much grimier, concrete, area filled with a number of scorched.

The following Enemies inhabit this location

These notable Equipment & Resources can be found at this location: 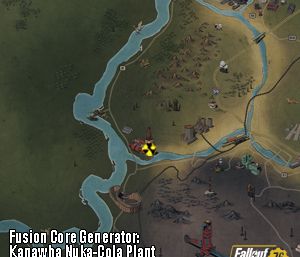